(Photo above) The Cheng San Chapalang Club has a two-pronged aim: to reduce waste, and allow those in need to “be empowered to choose items they really need and want”, said its leader, Ms Bernice Wong. More than 20 youth organised and led the community gifting drive, amassing everything from clothes and shoes to books and toys.

Catching sight of a Nerf gun, its nose peeking out of a pile of toys, a young boy’s eyes light up — payload for 10 minutes of foraging. An aisle away, another pair of eyes similarly shines. They belong to an elderly man, who has found brand new walking shoes; his first in a long while, because he hasn’t been able to afford them.

The two were just some of the many who emerged with prized finds from the Cheng San Chapalang Club, a community gifting drive held at Cheng San Community Club from December 2020 to February 2021.

Among its random mix of unused and preloved items — as its colloquial name “chapalang” implies — were books, clothes, even home electronics such as vacuum cleaners and laptops, all ready for new homes.

The extensive variety of items was far from decrepit, even if their original owners no longer needed them. Many others did. 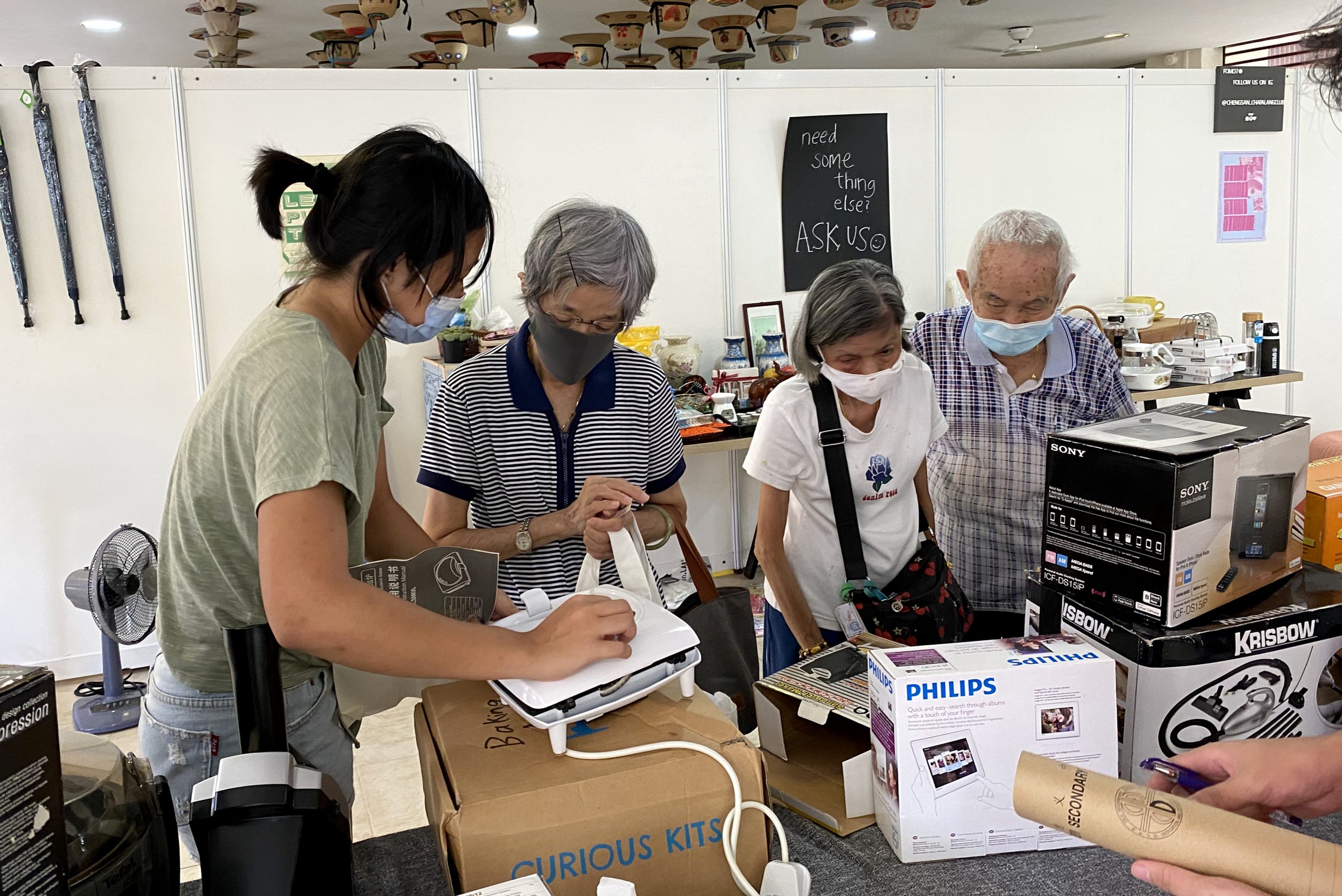 (Above) Volunteers manning the booth with electronic appliances often had to double-up as translators to explain to seniors in dialect how to use the electronic items. It is important that the recipients know how to work the items properly before taking them home.

The club’s organiser, Ms Bernice Wong, is a regular volunteer in the Cheng San area. The 33-year-old photographer often goes for house visits to distribute rations such as rice and canned food to low-income residents.

On these runs, she’d observed: “Families actually have enough of these rations, or not all the rations are suitable because of various dietary restrictions. So this leads to a problem of unnecessary food waste and resources.”

She pointed out: “People throw stuff out, even though these items are still in good working condition. At the same time, many others in the community could really benefit from receiving these items.”

She wanted to address two issues at a go: minimise waste, and help those in need. So she seized on a familiar year-end Singaporean ritual: spring cleaning.

“To connect the dots better,” she figured, “why not create a space so that they can come and be empowered to choose items they really need and want?” Offering items that go beyond basic necessities, which are nice to have, “could really mean a lot to an individual, like a new toy for a child or popular streetwear outfit for a young teen”. 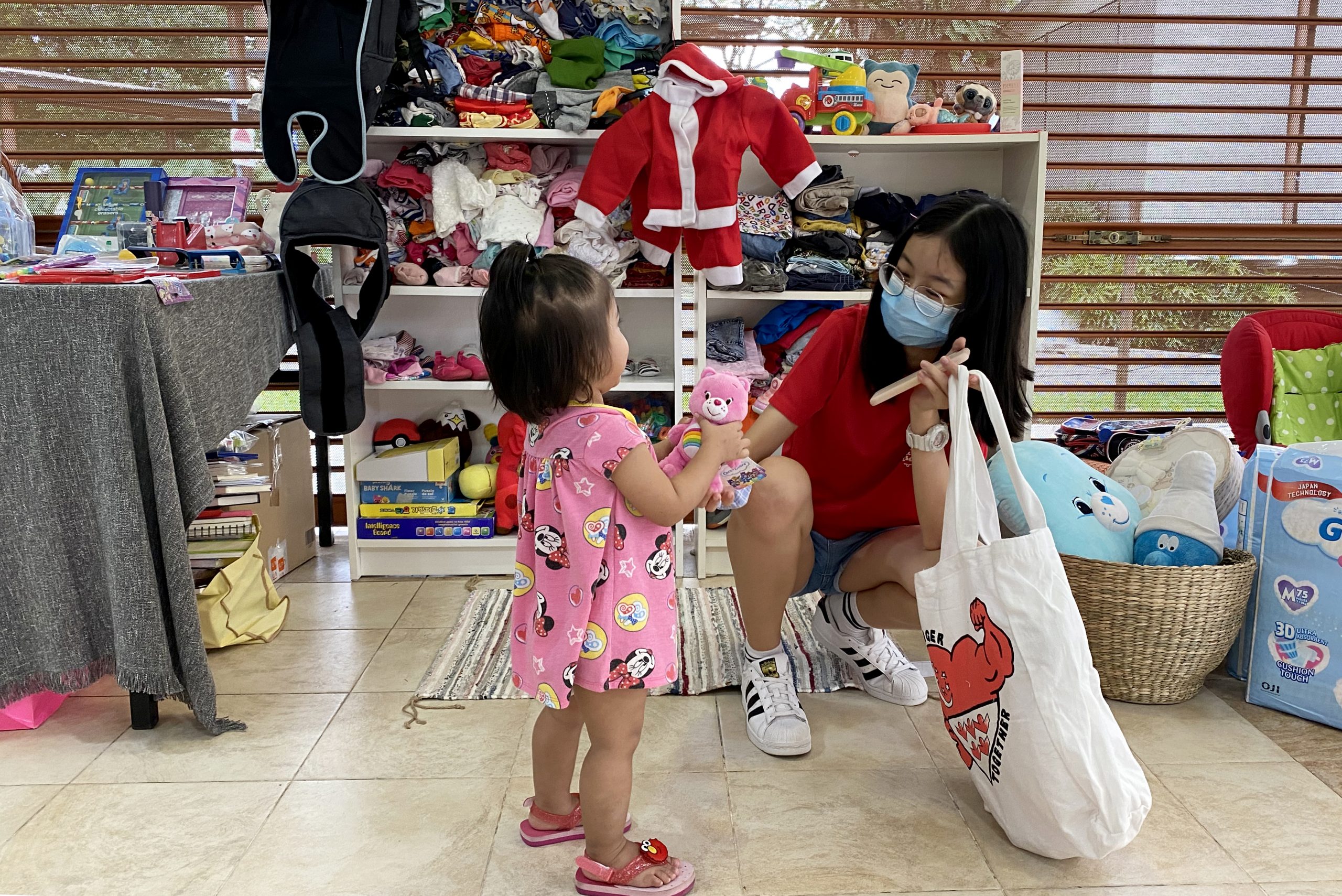 (Above) Many children were excited to be able to choose an item for themselves, which were often toys. To give family members enough time to explore the collections at Cheng San Chapalang Club, volunteers would interact or look after the children while the adults browse for items they would like.

A youth-driven endeavour
With a plan in mind to set up the space, Ms Wong was able to rally together a team of about 20 volunteers, aged 14 to 23, within just two weeks. Many had earlier emailed them to find out if there were any opportunities to volunteer over the December school holidays.

But rather than just assigning menial tasks to the group, Ms Wong had other ideas.

She put its members in charge, and gave them autonomy so they could learn and gain experience, and eventually run their own community projects.

Dipping into their various strengths, from social media engagement to leadership and organisational skills, the group of young volunteers handled everything from planning to execution. Those with a knack for art and design even prepared elaborate floor plans and mood boards to pitch ideas on how to decorate the community space for the gifting drive.

“It’s been great working with the team,” shares the group’s youngest volunteer, 14-year-old Russell Boyer. “Everyone seems inspired to work towards the same goal, and willing to collaborate with everyone else.”

Organising themselves into teams, those in charge of outreach spent the initial weekends out at the rental HDB blocks, putting up publicity posters and going door-to-door to invite the residents over. The social media team also got down to business with online publicity efforts through their Instagram account. 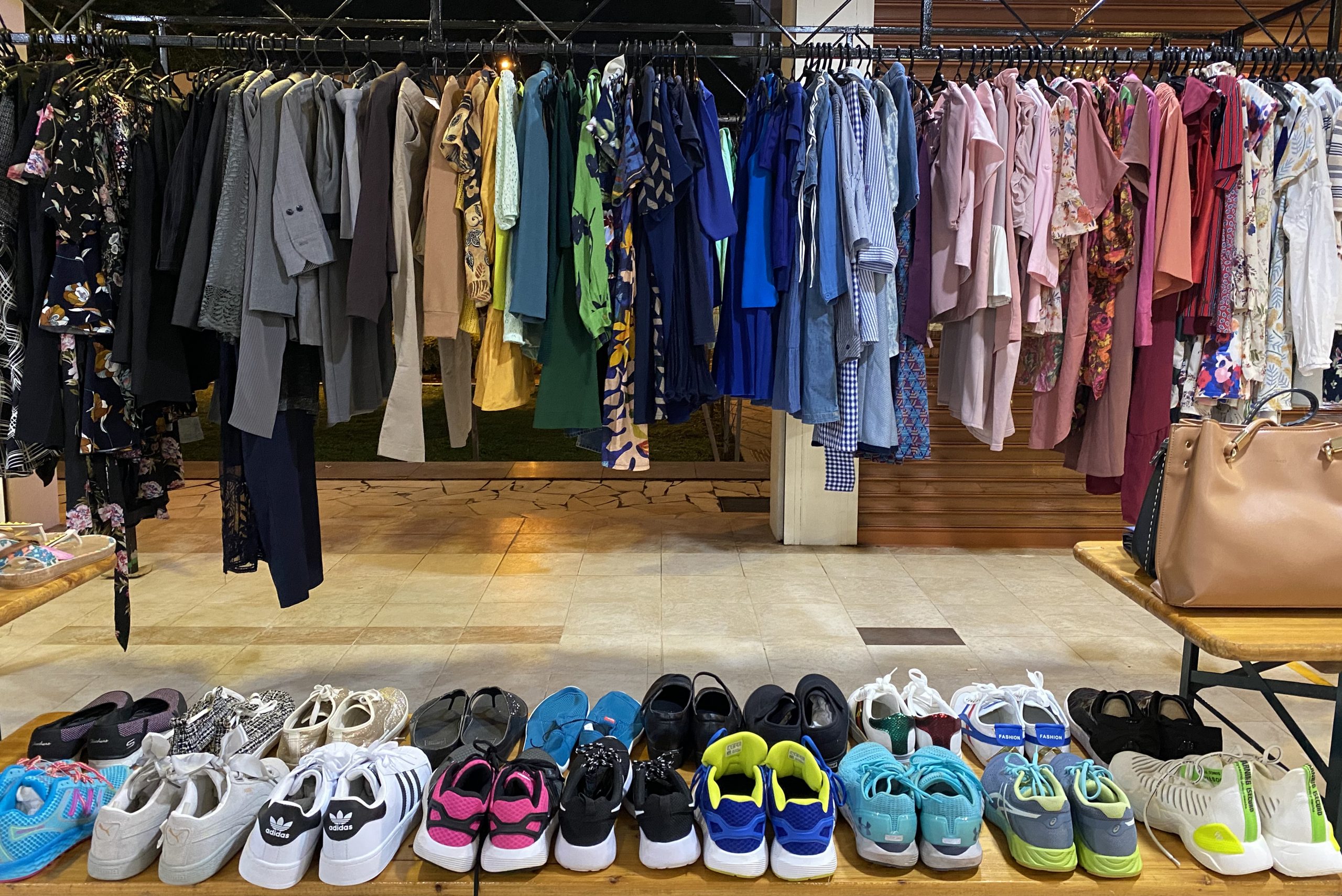 (Above) After many days of sorting and organising clothes based on their size and condition, volunteers finally settled on a colour-coded presentation that looked like something out of a departmental store.

Meanwhile, others rolled up their sleeves to pack and sort through donated items — a task that proved quite the challenge.

Through many generous contributions, they’d amassed such an overwhelming number of items within a mere six days of collection that they needed another multi-purpose hall for storage.

“It did seem like a junk place at the start,” confesses volunteer Ms Rachel Chew, 17, with a laugh. “We really had to take a lot of time to sort through and move things around. Some of us would come every day and even stay till 9pm to tidy everything up.

“At first, I couldn’t see where all this was going. But after we saw everything get transformed nicely in the racks and shelves, and when people came in to look at the items, I felt really accomplished. It was like our efforts did pay off.”

Her teammate, Lim Shi Ying, 17, echoes similar sentiments: “It has been super fulfilling and fruitful. Being able to start a project from scratch is not easy, but we’ve managed to achieve a lot, and it’s been satisfying to be able to build up this space together.”

The evident support from the community — passersby came forward to hand out snacks and thank them for their hard work — also kept them going. Mr Adam Ahmad Samdin, 23, aptly describes the project as “done for the community, by the community. There’s a strong sense of neighbourliness and community spirit”.

Fellow volunteer Mr Daryl Keith Teo added: “It was really heartwarming to see how people in the community were bringing in things to donate, and blessing others through their actions.”

“If you have the opportunity to do something for the community, even if it’s small, it’s a good idea to just do it anyway. To play a part in making things better, I find that meaningful.”
Mr Adam Ahmad Samdin, 23, volunteer, Cheng San Chapalang Club

Volunteering has been especially meaningful for the 19-year-old, who is also a Cheng San resident.

Mr Teo admitted that despite having lived in the area since 2006, he had never gotten to know his community or their needs, until then. Spending months on the project, he reflected, has helped him “get to know and give back to the neighbourhood where I’ve grown up since I was 4.”

Inspired to continue serving the community
Today, the group’s commitment has deepened. The Chapalang Club, over just four months, has grown past its original one-off gifting drive.

The team continues to use the community space at Cheng San Community Club for a range of activities.

Its members have secured several donors to provide food items for weekly distributions, and low-income residents in the vicinity can drop in to pick up whatever they need.

In late January, they initiated the “Chapalang Goes Digital” workshop, through which they buddy up with the area’s elderly to help them get familiar with the different digital functions on their smartphones. More community projects are currently in the pipeline.

“It really puts a smile on your face when you can see someone get what they didn’t have at first, and cherish it in that one moment. It inspires me to do some more,” said Russell.

Mr Adam added: “If you have the opportunity to do something for the community, even if it’s small, it’s a good idea to just do it anyway. To play a part in making things better — I find that meaningful.”