(Photo above) Madam Manomani is constantly by her son Thimajit’s side, watching over him in case he needs help. Thimajit was diagnosed with cerebral palsy, a condition that affects his muscles, coordination, movement, and speech.

The one defining moment in Madam Manomani’s life was when she became mother to her first child in 1991, Thimajit: he was born with cerebral palsy.

She’d never even heard of the condition until then. But it would require her to summon the resilience to cope, as it plagued her son’s muscles, coordination, movement and speech.

“He was so beautiful when he was born. It was only after eight months, when I brought him to the doctor, that I learnt he had this condition,” Madam Manomani, now 55, remembers.

The doctor had cautioned of difficulties ahead, telling her she had to be strong, as “not everyone would face such a challenge in their life.”

She realised at that point that she would need help. Over the 31 years since, Madam Manomani has had to learn alongside her son. 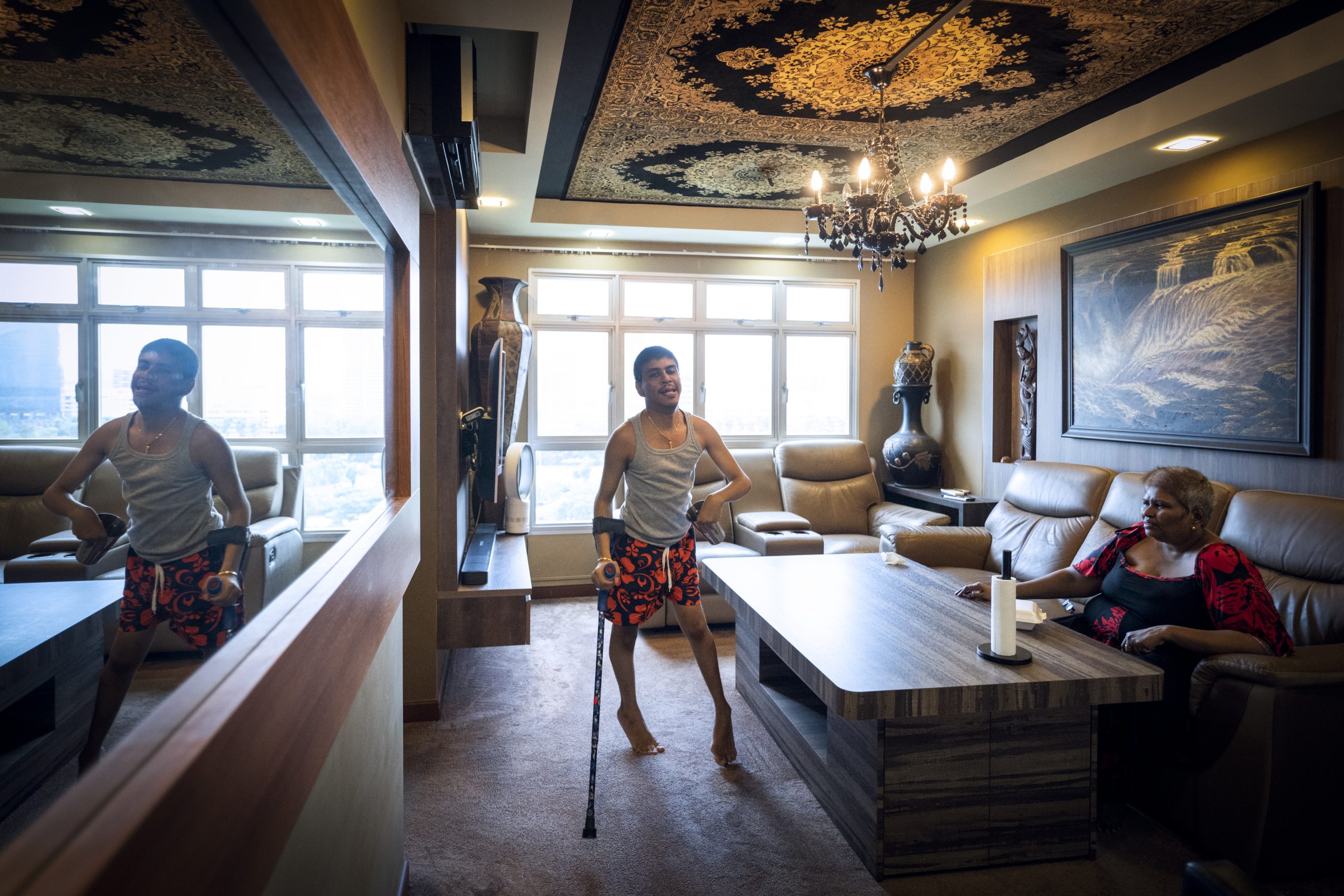 (Above) To minimise injuries when Thimajit falls, Madam Manomani has had her entire home carpeted, except for the kitchen and bathroom. She hopes that Thimajit will eventually be able to care for himself when she and her husband are no longer around.

She opted not to have another child, stopped her job in textile sales, and devoted herself to caring for Thimajit. She realised how tough progress would be for him as he had difficulties even turning over, sitting up, or walking — developmental milestones that most babies effortlessly achieved.

Learning support for Thimajit began when he was three at the Rainbow Centre. At age six, he went to the Cerebral Palsy Alliance Singapore School (CPASS), which is where he stayed till he was 27, acquiring life skills.

“He needs a lot of support, not only physical while he is walking but emotional support in terms of encouragement. If he falls down, I will tell him ‘well done’, because then he can try and get up.”

Today, Thimajit can walk only with the aid of a stick, because the left side of his body is much weaker than his right. His speech is unclear, so he has to show pictures of what he wants to order to hawkers, or have his mother speak on his behalf.

These are milestones that are for him, progress. But even so, he is mostly homebound, and dependent on his mother.

“He needs a lot of support, not only physical while he is walking but emotional support in terms of encouragement,” she says. “If he falls down, I will tell him ‘well done’, because then he can try and get up.”

Small, progressive steps go a long way
In 2019, Madam Manomani got an extra boost when she reached out to the Singapore Indian Development Association (SINDA).

Through its Counselling and Casework support programme, which is funded by the National Council of Social Service (NCSS), she was assigned a caseworker.

Kohilavani Dhakshanamorthy, 37, an assistant senior social worker, has been assisting the family since.

More than that, she has also become a confidante to Madam Manomani, who has few friends. In particular, Madam Manomani would talk to her when she experienced conflicts with her husband, a taxi driver, who was feeling stressed from the pandemic.

“She is a good listener, and it was very helpful for me to talk to someone about my problems,” she said.

Kohilavani didn’t just listen. She helped Madam Manomani apply for funds from financial assistance schemes that are part of a wider range of support produced by SINDA in 2020 to provide support to families and individuals impacted by the pandemic. 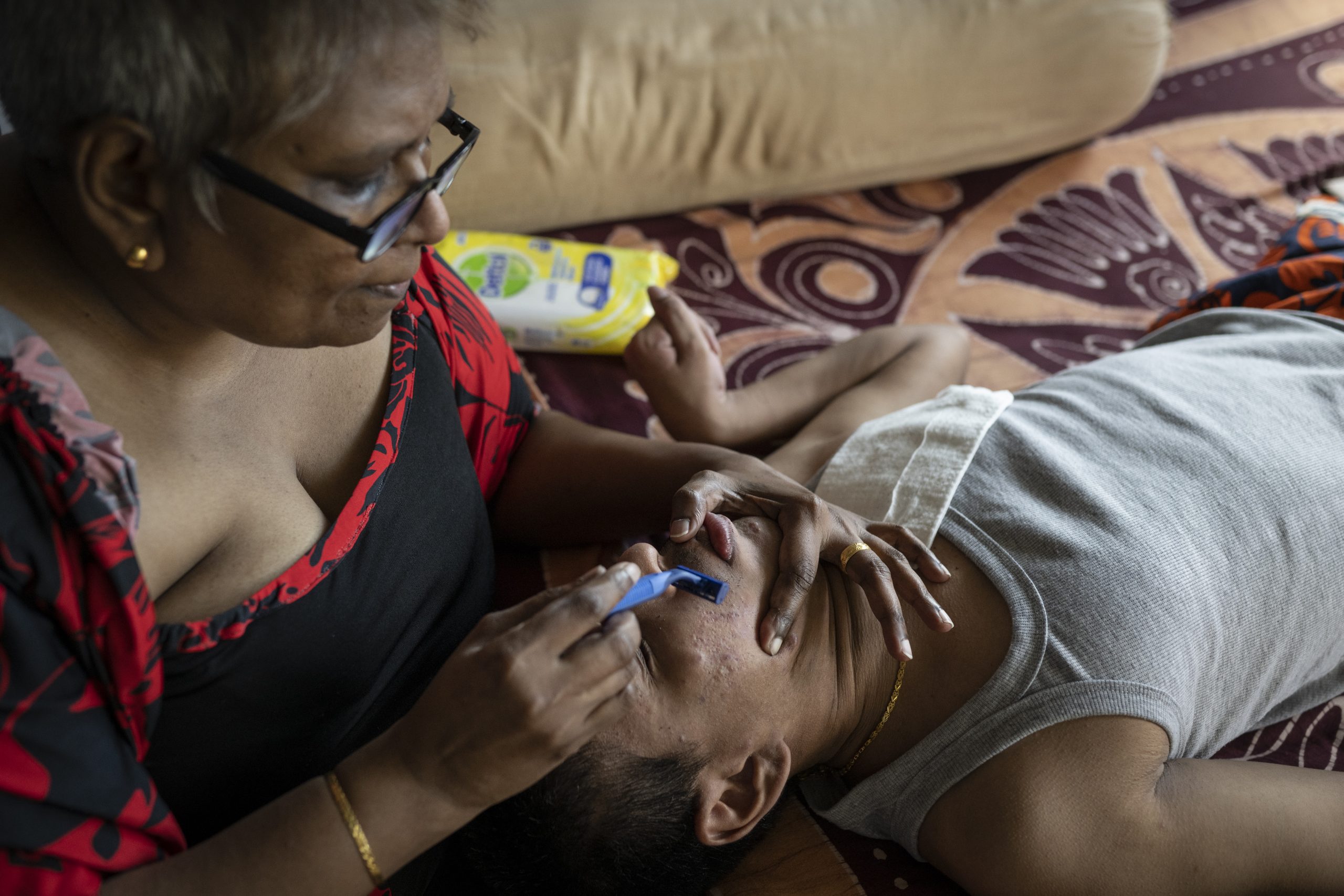 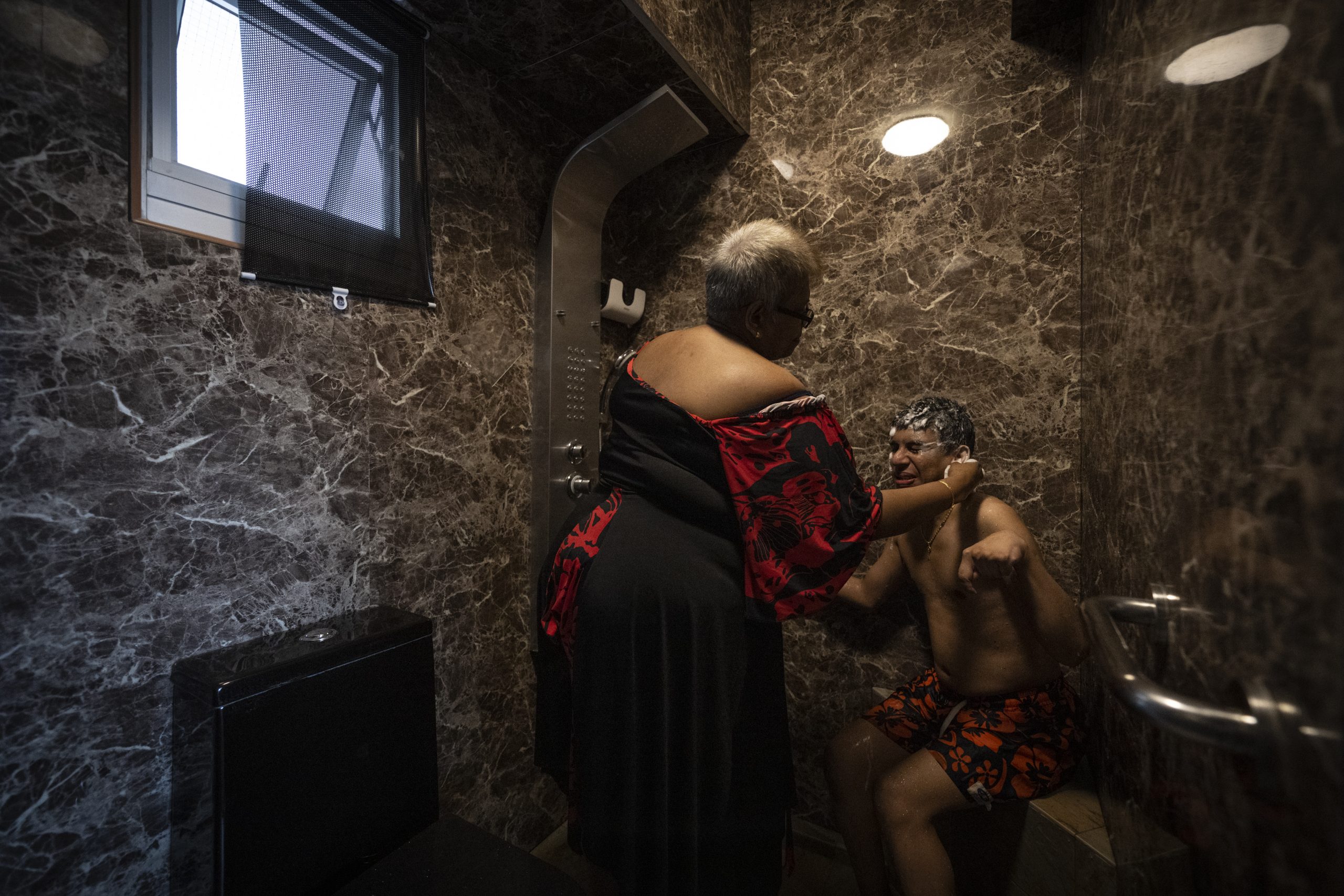 (Above) Thimajit’s physical abilities are limited so he needs assistance in his daily routine. Even tasks like showering and shaving can be a challenge.

Madam Manomani received $300 from the SINDA Resilience Package, and another $1350 from the SINDA Care Package. The funds were very useful because her taxi-driver husband’s income had been affected during the pandemic. Kohilavani further helped Madam Manomani, who has difficulty walking, to obtain transport vouchers so she can go for her medical appointments.

And, when Madam Manomani worried that Thimajit needed to improve his English just enough that he would be able to “read more and fill up forms on his own, such as applying for a passport, read signs when he is on the bus, order food over the phone”, it was Kohilavani who made arrangements for SINDA to send an English and Maths tutor to give him free tuition once a week for about six months.

The tutor, in turn, helped Thimajit gain confidence as his academic skills showed improvements. “She was very helpful. After she came, he took an interest in learning how to speak English, and went from being able to read one line, to two lines, then paragraphs,” said Madam Manomani.

The help has enabled Madam Manomani to plan for a future in which she may not always be around to care for her son. Eventually, she hopes he can work from home on design jobs using the digital art skills he learnt at CPASS over the last four years, in tandem with his improved language abilities.

And, ultimately, be more independent. “Take transport on his own, talk to the bus driver, read the signs on the bus, order food for himself. I just hope that he can learn to take care of himself even if we are no longer there with him.”

Click here to find more human-interest stories under NCSS’ Stories from the Heart series, which showcases the work of NCSS’ partners and individuals as we work towards a compassionate society and uplift those in need to live a dignified life.