What Are You Doing SG?
Home Stories Features The Arts Creates a Safe Space to Let Those Feelings Show
Share
Facebook
Email

When the pandemic froze his plans for drama-school auditions in the UK, Mr Zack Pang, 21, admits: “I was obviously a bit bummed.”

Then, the star of Pangdemonium’s pre-Circuit Breaker stage production, The Son, redirected his talent to another cause.

Forming a trio with experienced speech and drama trainers, Ms Serene Martin, 37, and Ms Marie Gabriel, 40, he joined them to lead a special four-week workshop at CampusImpact’s Theatre Thursdays.

CampusImpact provides education for the young from low-income and disadvantaged families, so they acquire skills and values. It also provides childcare, and a safe physical place for children and youths to experience emotional security. Its Theatre Thursdays are focused on developing speech, confidence and presentation skills.

During an activity of collecting items for a Covid-19 time capsule at its Yishun after-school care centre during the Circuit Breaker, children started to cry as they reflected on what those items had come to mean to them in those months. CampusImpact’s executive director Ms Elysa Chen, concerned about their emotional wellbeing, realised they needed help processing their feelings.

Some might be confused about upheavals in the household, where, all of a sudden, multiple siblings might be crowding into one room for home-based learning along with parents who were also working remotely. Others might experience dysregulation — when physiological changes, such as bed-soiling recur in kids who have outgrown the stage, because of stress. 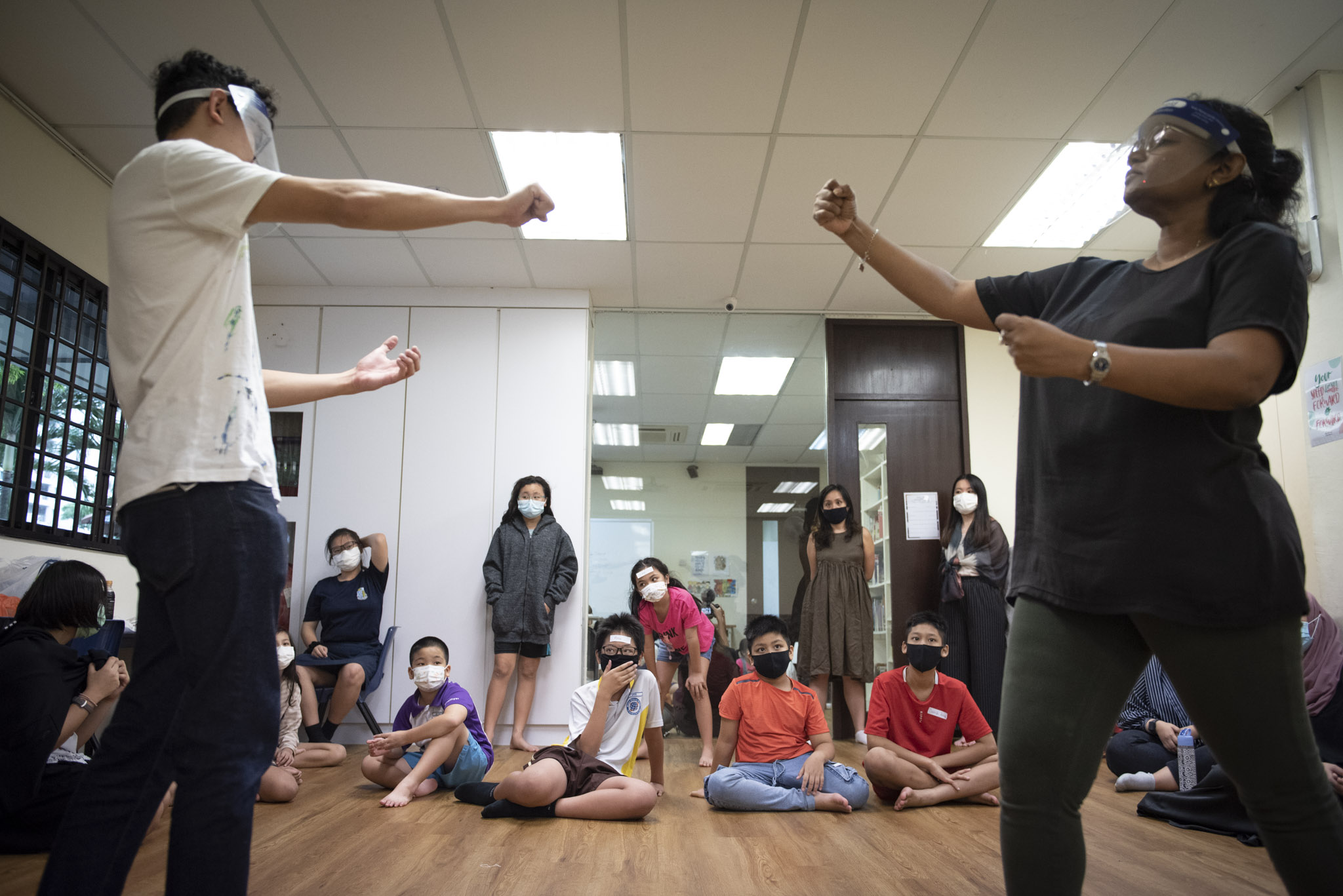 (Above) As part of Theatre Thursdays, CampusImpact engaged Pangdemonium to lead a four-week workshop to help children develop speech, confidence and presentation skills.

She reached out to Pangdemonium to collaborate, and their launch, a Covid-19 four-part workshop, received a $3,000 grant from the WeCare Arts Fund.

Bringing theatre practitioners in for four weeks was a treat for the children at the Yishun centre, including those who signed up only for the workshop.

“We knew that some of the kids were in very challenging home situations, which we wanted them to have a breather from. Coming to the centre should be a refuge for the children.”

Artistic Expression for Emotional Wellness
Rambunctious seven- to 14-year-olds are not, by nature, a sit-still-and-pay-attention audience.

So, typical of a 90-minute session, Pangdemonium’s team keeps them on their toes: jumping, freezing like museum statues, and expressing their feelings in exaggerated facial stretches.

Mr Pang, who grew up around theatre practitioners — his parents Adrian and Tracie Pang are Pangdemonium’s founders and artistic directors — pointed out the exercises encouraged free expression, creating a space “where you can say anything, even if it’s not directed at a specific issue”.

“Being able to actually say the words ‘I’m going to grow up in a time of unemployment and environmental collapse’, is not something a six-year-old will be able to do,” he said. “But just the very fact that you know you have the space to say what you wanted to say is important. And as you grow up, you’ll continue to seek out those spaces.”

(Above) Speech and drama trainers Ms Marie Gabriel and Mr Zack Pang from Pangdemonium freeze, jump, and run with the children to help them learn to express themselves.

Ms Chen said having experts teaching them to script and produce their stories was a treat. “The kids rarely get to have that much fun, so the big benefit is for them to be free, to play with one another and to have their creativity challenged and pushed.”

Young participants were not the only ones impacted.

Ms Martin said: “I love the energy! When I came in they were so excited!”

By its second edition, those who were reticent or struggling with learning difficulties had begun to open up, running in to greet her. “The child that was quiet was speaking, and spitballing; one of the children with sensory processing issues could verbalise what was actually bothering him! And I felt that was such a huge thing.”

She noticed in exchanges with lower primary level children a sense of the morbid, isolation, and a lingering on unpleasantness. One recurring theme brought tears to her eyes: “The fact that was really heartbreaking for me was that a lot of them haven’t been read to.”

Ms Gabriel, who worked with Mr Pang in a second group of older children, noted that Asians are generally less forthcoming with their emotions. 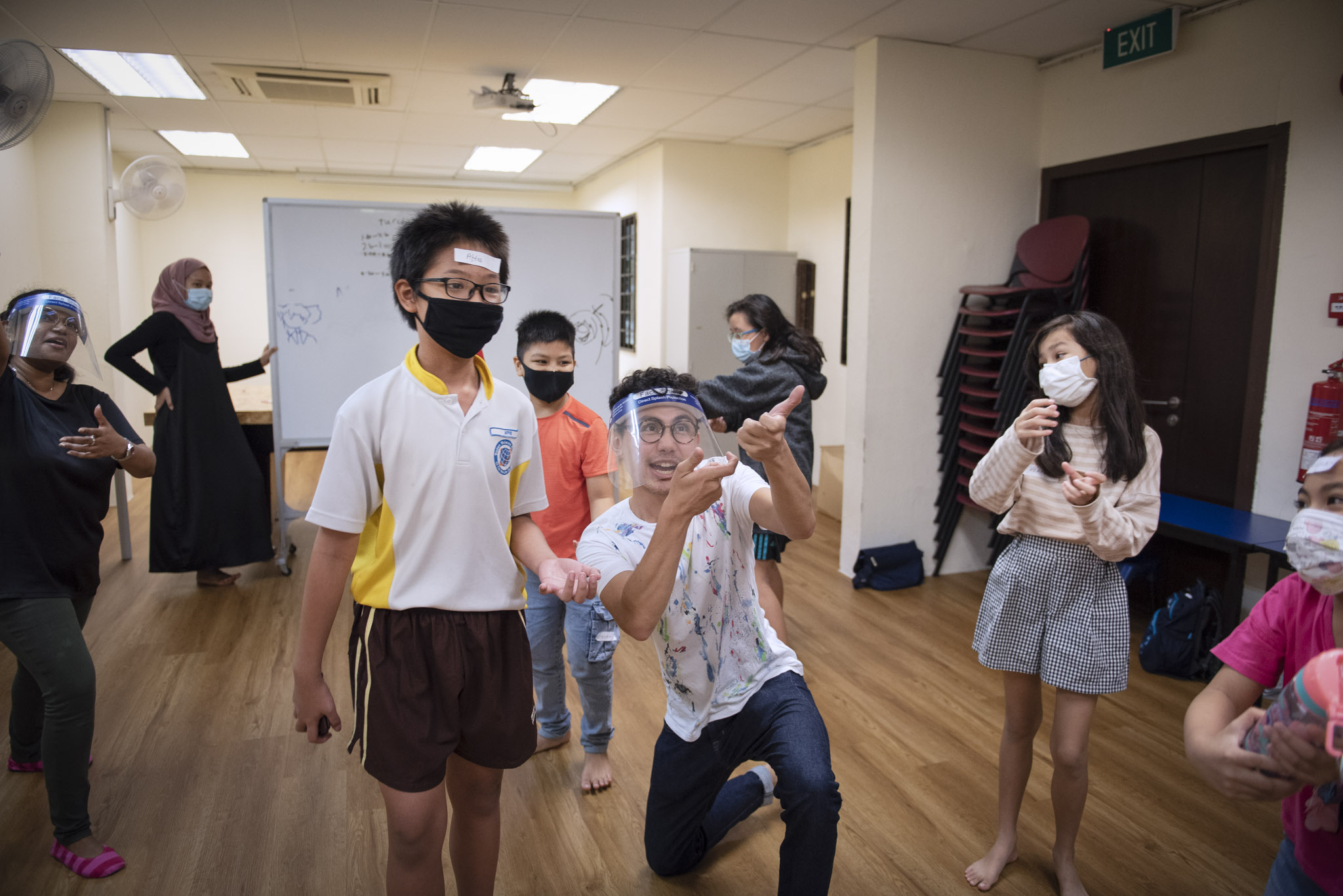 (Above) The drama techniques of theatre help children open up and encourage freedom of expression.

Discussing how they were learning to show respect to others who stepped up to say something, and learning to express them appropriately, in a safe space, is essential for growth.

“Drama is fluid and fun but you need boundaries and discipline, otherwise you get nowhere,” she said. “Children really need those boundaries, and they are built to push them… There were times I was joking with them, playing with them. But when they crossed a particular line, I would put my foot down and say, no, this is not acceptable. And they’re okay with that.”

On a personal note, she added: “Covid-19 took drama away from me for three months. Just like that, overnight, I couldn’t teach. And I realised almost immediately how much I missed it. It feels so good to do it again — it’s a super power!”