What Are You Doing SG?
Home Doers Ruzaini Syazwan: Juggling School and Delivering Food for the Homeless 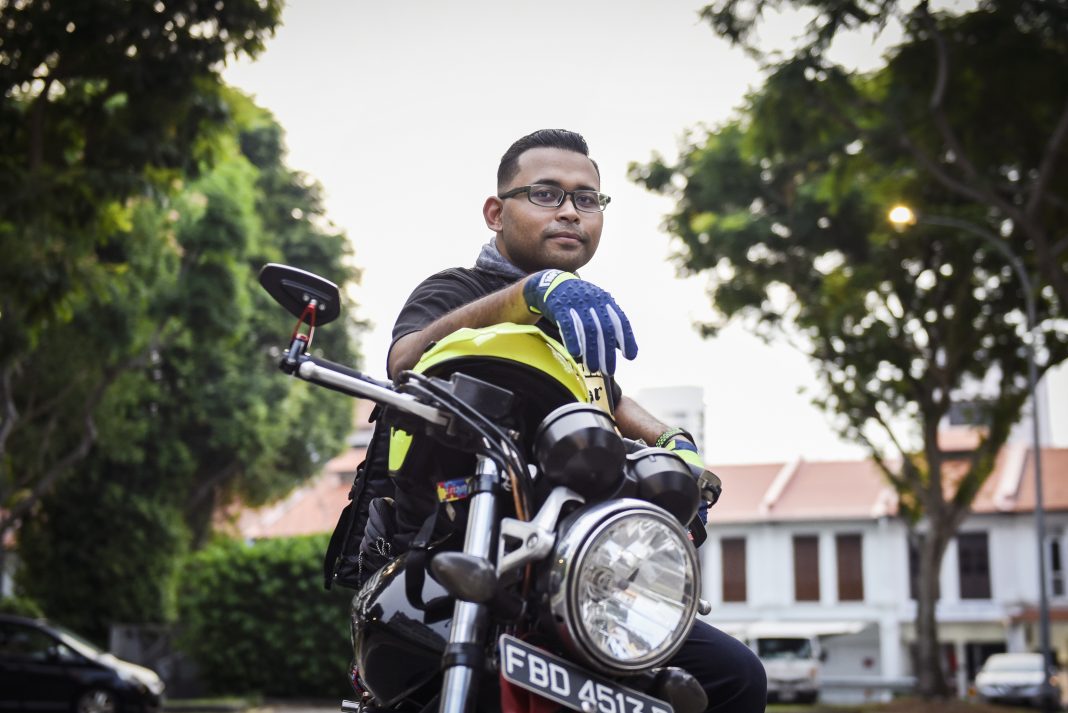 (Photo Above) It’s been almost two months since Ruzaini Syazwan, 29, started the Umbrella Initiative, a project that provides meals for the needy and homeless. The full-time nursing student started out delivering the food on his own, but the project has since expanded to a 9-person team.

At 4am, while most of Singapore is asleep, Ruzaini Syazwan, founder of the Umbrella Initiative, is zipping around on his motorbike delivering food to the homeless.

At a hawker centre in the central part of the island, some among Singapore’s displaced community are gathered, taking shelter from the elements. Some use benches as makeshift beds. Others prefer sitting on chairs while resting their heads on tables.

Packet by packet, Syazwan sets aside freshly prepared meals by Adam’s Corner, a local restaurant,  on the tables.

Just as he is about to leave, Syazwan sees an elderly man, awoken by the aroma of a hot meal, rising to acknowledge his kind deed. Almost immediately, the man starts tucking into the meal.

“When I saw that, it put things in perspective and showed how even a simple thing like having one square meal a day is a luxury to some, but taken for granted by many others,” said Syazwan.

But during Ramadan this year, he made the bold step to start his first project – the Umbrella Initiative (#UmbrellaInitiativeSG). The initiative uses donations from the community to buy and deliver packet food to the needy and the homeless.

The idea behind it was to fill the gap that resulted from the closure of mosques due to Covid-19 public safety measures. Under normal circumstances, mosques in Singapore, especially during Ramadan, would prepare meals for the needy.

“There are many safety nets in Singapore but still some fall through the gaps. Many of the people I meet do not have access to TV or radio. They do not know of the schemes and help programmes available to them. Some have no phones, and those with phones may have no Internet access.”

What started as a solo project delivering about 20 meals daily grew to a nine-man operation of friends. At its peak, the group distributed close to 300 meals a day.

Syazwan decided on the word “umbrella” as it aptly describes what his project hopes to do – provide much-needed support and refuge from the sudden storms that occur in life.

“Not everyone is poor or homeless because of their own doing,” he said.

Over the course of the last two months, he has grown close to some of the people he helps. He has found that often, it is family squabbles which lead to many being left without a home.

He said: “Some of them sold their homes to help with a family situation and then moved in with relatives or their children. But when there is a disagreement, they find themselves on the street.”

Added Syazwan: “There are many safety nets in Singapore, but still some fall through the gaps. Many of the people I meet do not have access to TV or radio. They do not know of the schemes and help programmes available to them. Some have no phones, and those with phones may have no Internet access.”

His interactions with the homeless have further strengthened his belief that more must be done for this group of Singaporeans. He hopes to engage the Ministry of Social and Family Development (MSF) to help this small but vulnerable group and move them into shelters or homes.

“I’ve been helping out only in the Central and Geylang area,” said Syazwan. “But I am sure there are more people who need help elsewhere.”

He is in discussion with TOUCH Community Services, a  non-profit organisation, on a project involving him and his team in providing meals for more than 400 beneficiaries for two months.

Juggling a full day of school and both evening and pre-dawn delivery runs, Syazwan said that the past two months have been nothing short of overwhelming.

Very often, during the month of Ramadan, he had to break fast on the road and saw very little of his parents.

But he hopes people hearing of the work he has done with the community will see beyond the sacrifices of just one man to the bigger picture beyond – of how, despite the best of plans and intentions, there are still those who fall through the cracks and end up living on the streets.

“It is not just a problem for one race. I’ve seen people across all the races,” said Syazwan.

“Many of them are seniors and at their age, they should be living their golden years decently. They shouldn’t be worrying about food, or waiting on handouts for their only meal of the day.”