What Are You Doing SG?
Home Stories Features Raydy, Set, Give! 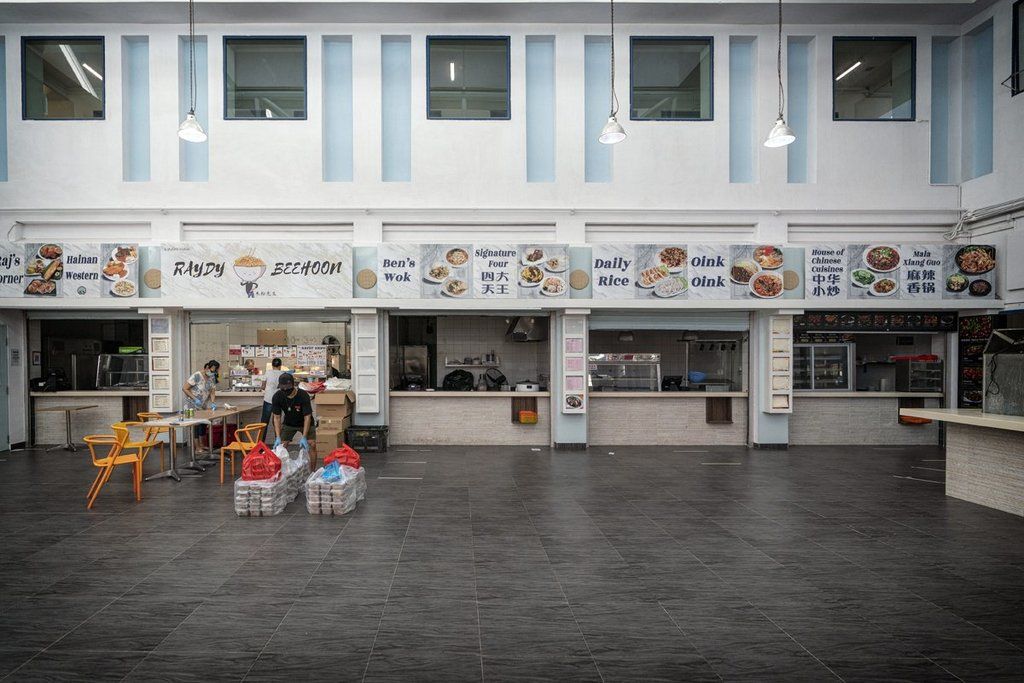 (Photo above) Lone operator. The rest of the canteen is closed, and all NTU’s students sent home. Raydy’s is the sole stall still operational.

It now works with three partner kitchens islandwide including Tang Tea House, to produce $2.50 meals of fried rice vermicelli topped with one meat and two vegetables (each pack comes with face masks strapped to the top).

Launched in late February at Nanyang Technological University’s Canteen 13 after nearly six months of planning, Raydy Beehoon feeds peckish night owls across the entire campus — the majority of its clientele are from halls of residence.

It has a logo some might call inauspicious: Two chopsticks stuck upright in a bowl. But the student enterprise has flourished since April 13, and now donates up to 2,000 sets a day. In its first week it donated 1,200 meals. Its fifth week concluded with 31,800 meals delivered.

Its owner and founder Mr Lee said he’d always wanted to help those less fortunate. “I’ve always seen a lot of people in need through the news, and I’ve always felt very helpless because I did not have the resources or ability to help them as a young student.

“Now that the tables have turned, I possess the ability to directly provide them with help and that makes me 100% more motivated as I know that I can make a difference.”

Here’s how he and his team are working it. 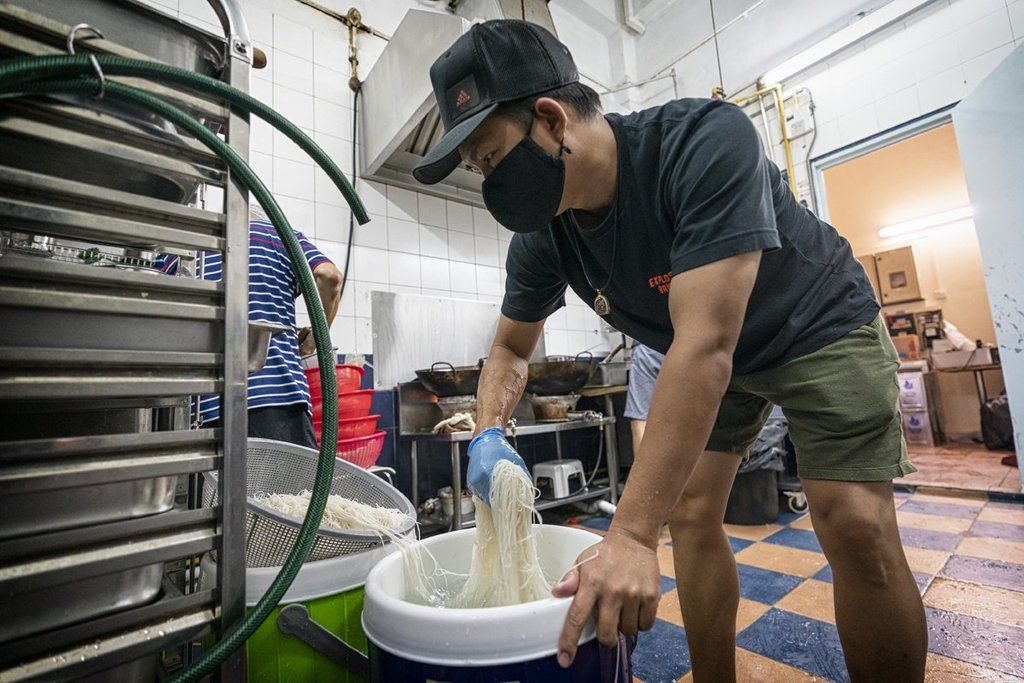 (Above) Strands up: Raydy Beehoon rouses past 7am to start preparation for lunch service, with its cooks kicking into gear so boxes are ready for collection by volunteer drivers around 10am. Its assistant manager, Mr Jordan Lee, 40, actually started out as a donor, offering 750kg of the rice vermicelli, before joining Raydy Gives. 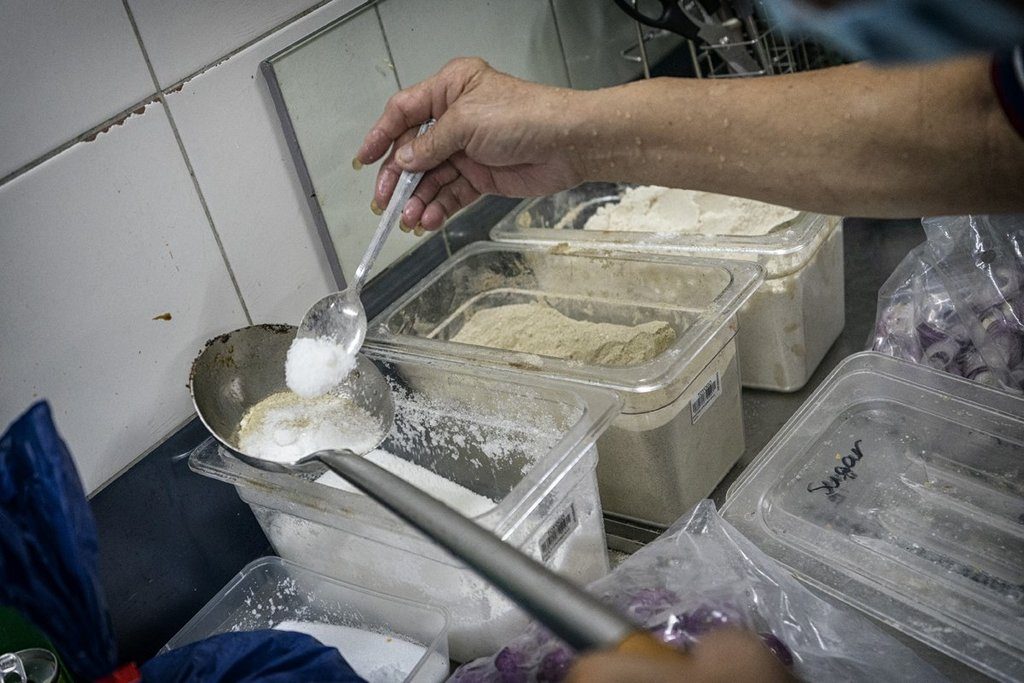 (Above) Seasonings of love. Spurred by Mr Lee, Ms Lim, Mr Hoe and Ms Ye spent up to three months in research and development — road-testing their pantry experiments on dancers in Hall 12, where they stayed and met. 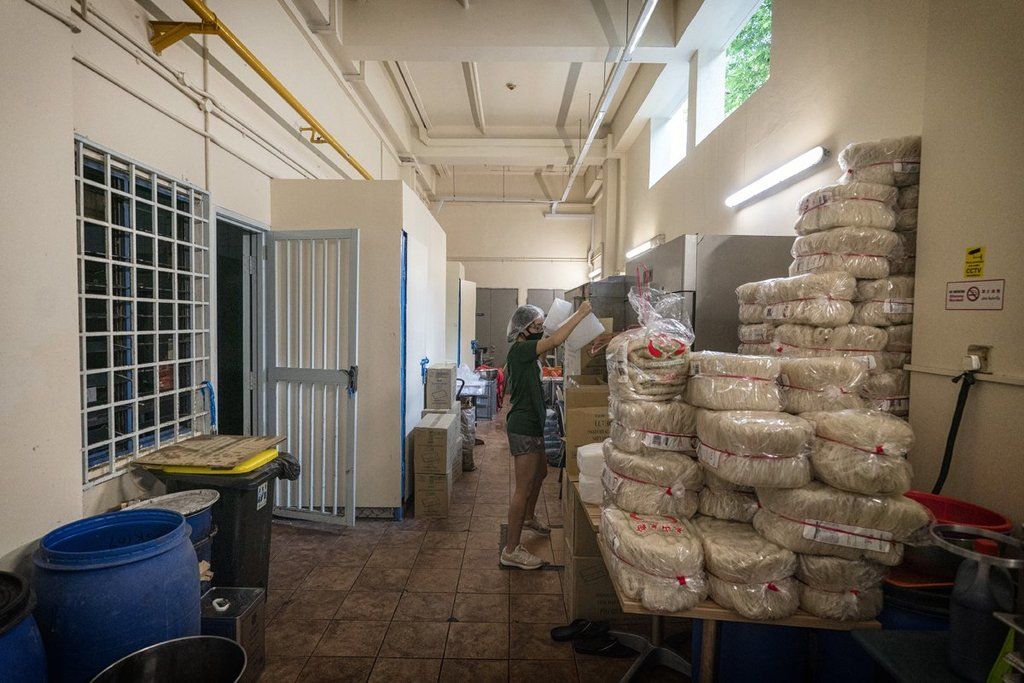 (Photo Above) Rice above it. Stocks of Tai Sun Bee Hoon, in 3kg bundles, wait out back. Each bundle can serve up to 40 to 50 diners. Meals for Raydy Gives have put a dent in what was a far larger pile, with the kitchen at NTU’s Canteen 13 alone generating about 300 packets a day. 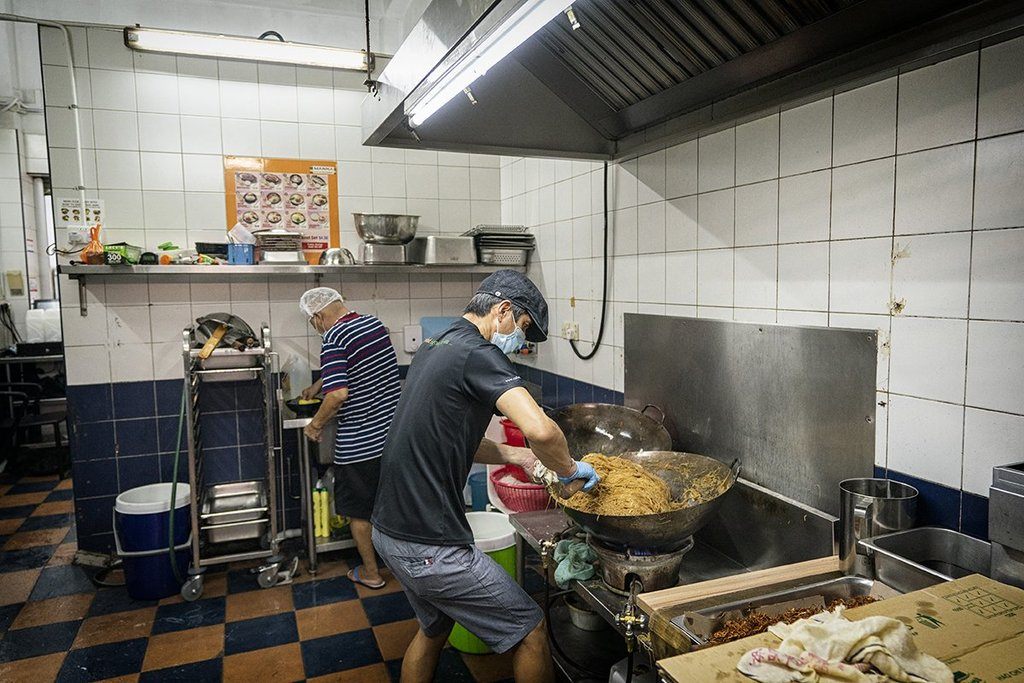 (Above) Neighbour of mine. Ben’s years of kitchen experience have been a boon to Raydy Gives, managing the day’s output with clockwork precision. 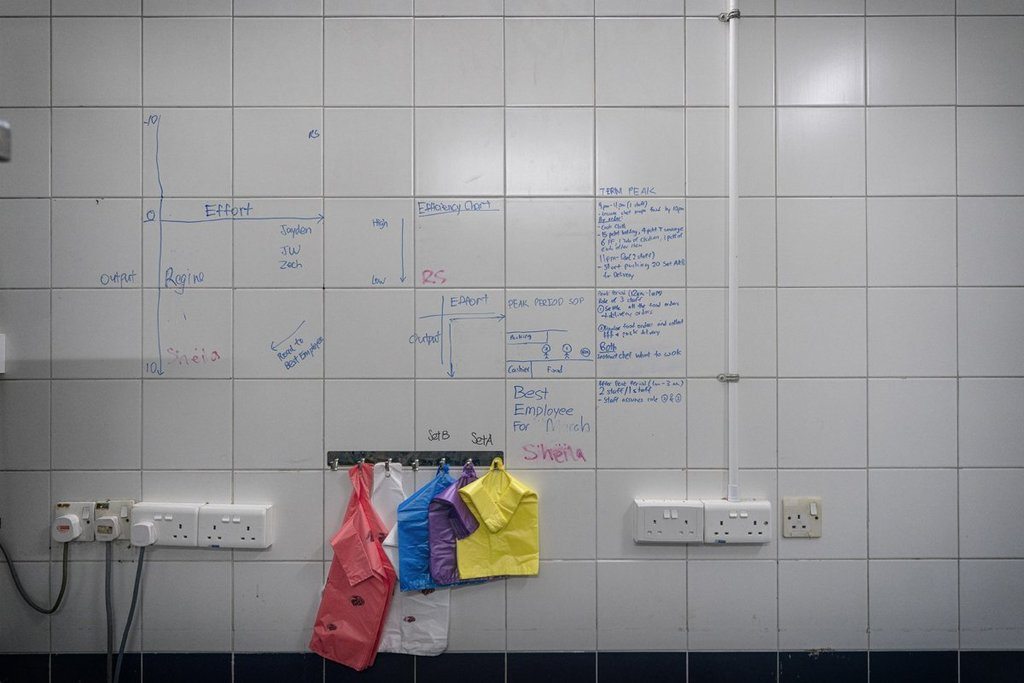 (Above) Wall to wall. Teammates Mr Lee Ray Sheng, 20; Ms Sheila Lim, 19; Mr Zechary Hoe, 22; Ms Ye Anran, 21, have taken to making notes to each other on their kitchen wall to spur each other on. Ms Lim said she and her friends used to spend up to $20 a week on suppers at a shop in Pioneer called Ah Lian Bee Hoon, which served economic noodles near Pioneer MRT station, near the campus. Deciding that they could cater to their peer groups for less, they made plans to open an on-campus bee hoon shop that served students from 10pm to 3am. 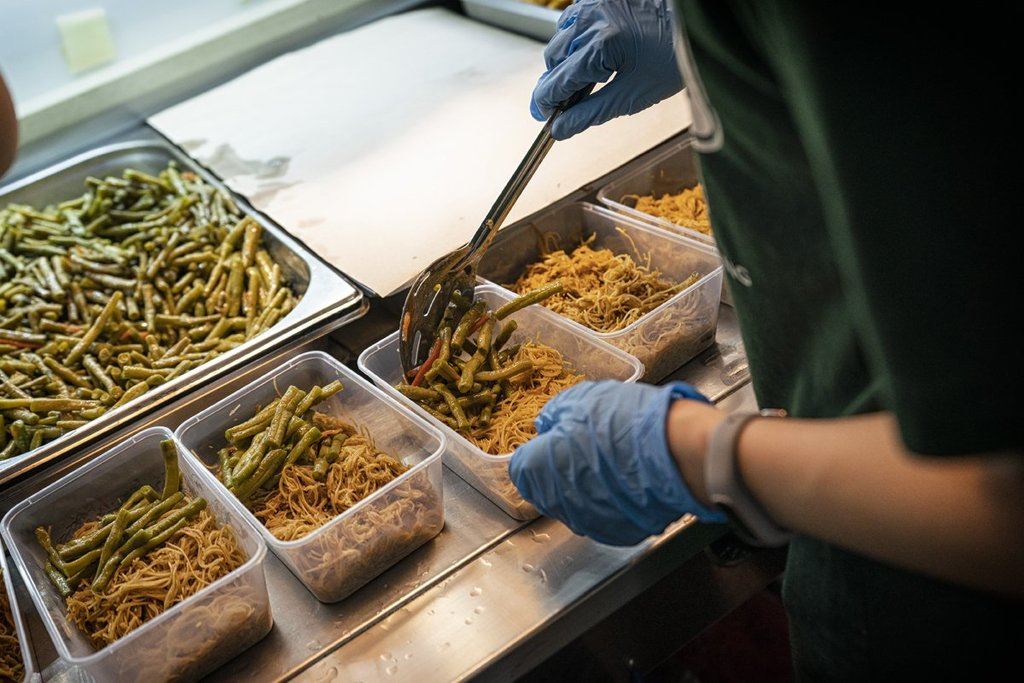 (Above) All topped up. Volunteers pack one meat and two vegetables into the bee hoon, before fresh face masks are strapped on to each lid. 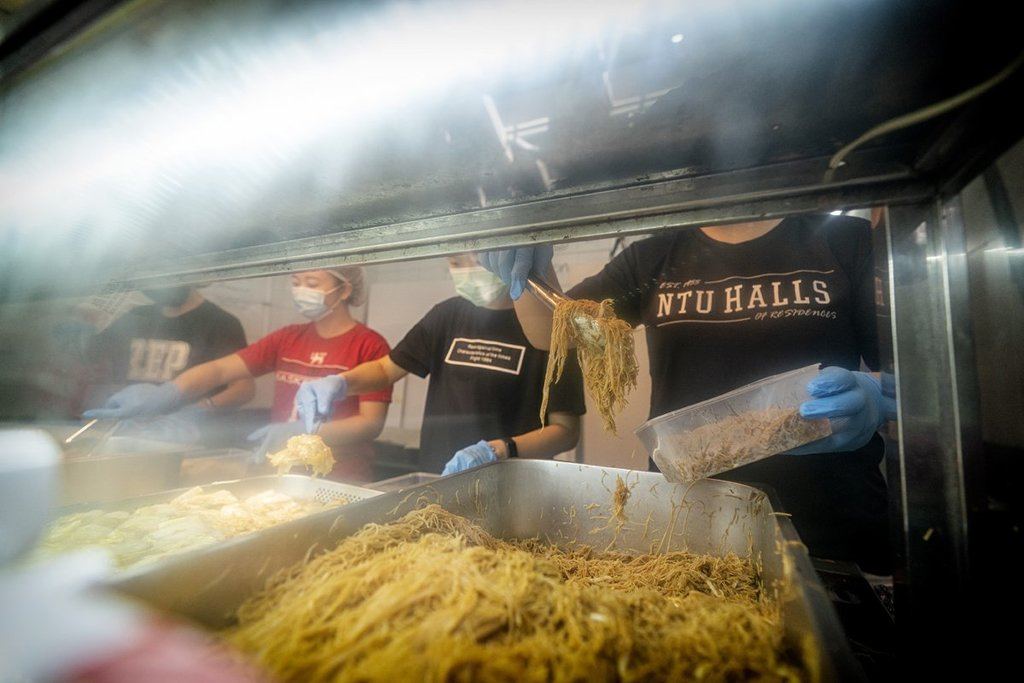 (Above) The chain gang. There’s a rhythm to the work that contrasts to the first day this stall opened. Ms Lim recalls that they couldn’t meet the demand on the first day of their opening, and had to regroup. 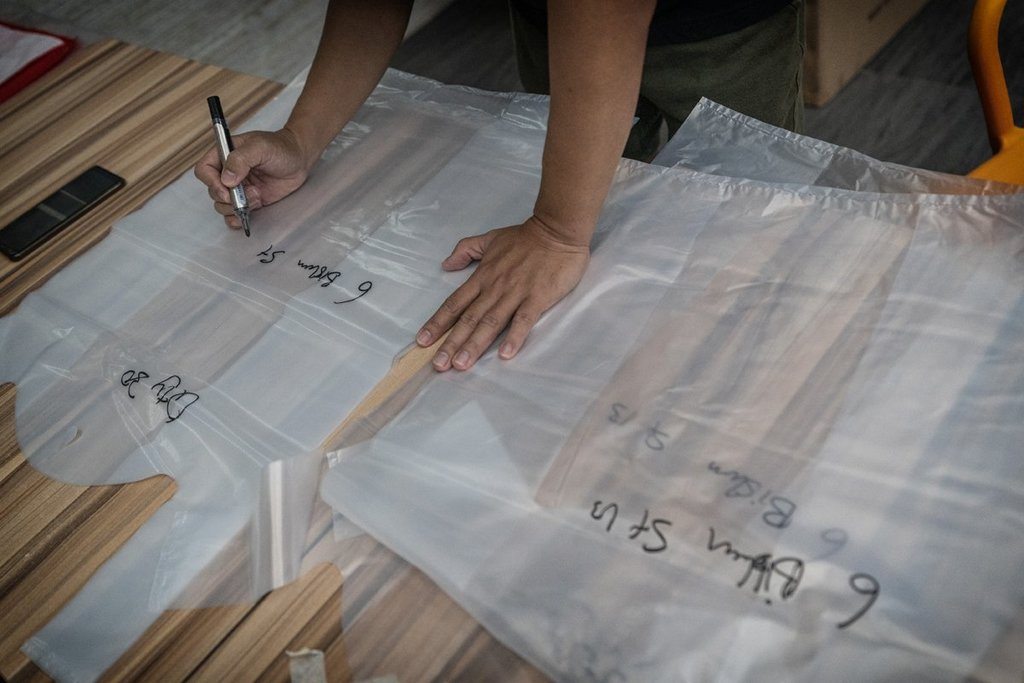 (Above) Bag and tag. Addresses and numbers go onto the carrier bags that will go on to beneficiaries of Food Bank, Loving Heart Multi-Service Centre, Willing Hearts Singapore, YMCA and the People’s Association. 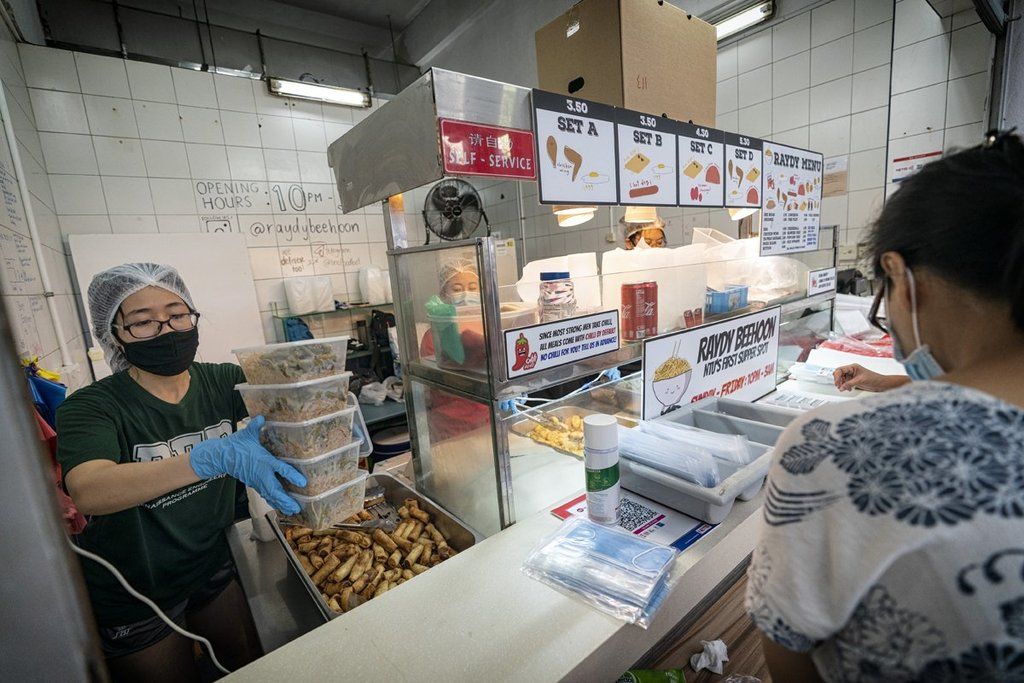 (Above) Raydy to go. Packed lunches go over the counter to volunteers helping to tape masks to them. 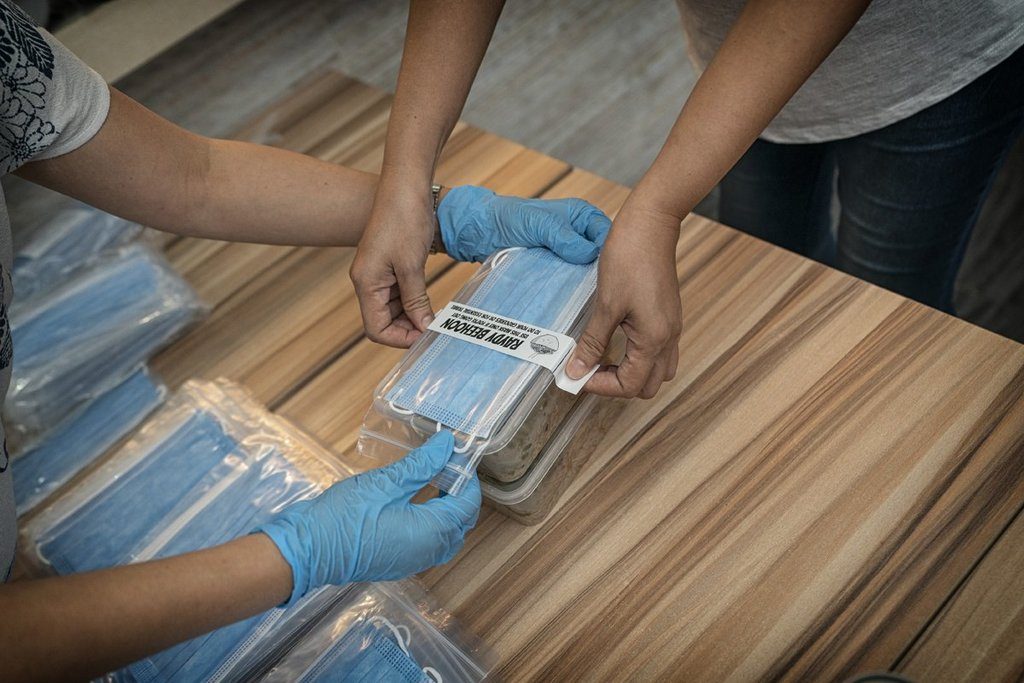 (Above) Mask and go. Just as the first volunteer drivers arrive at the canteen, packs are ready to go. Raydy Beehoon’s “Raydy Gives” fundraising campaign on Give.Asia went over its target of $150,000, closing at $163,273; $5,150 of that came from an offline donation. The money goes towards a $2.50 meal set, which includes a mask on each. 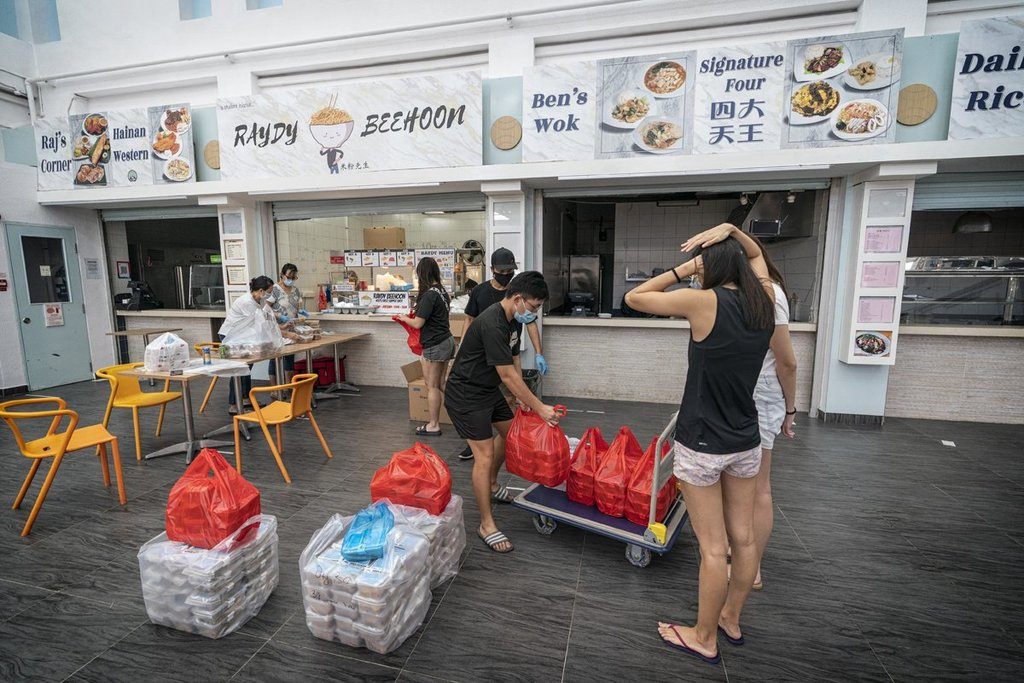 (Above) Can’t sit still. In an otherwise silent space, the foursome from Raydy’s Beehoon has been drawing committed supporters to its cause, who come out to help them pack and load bags of food. 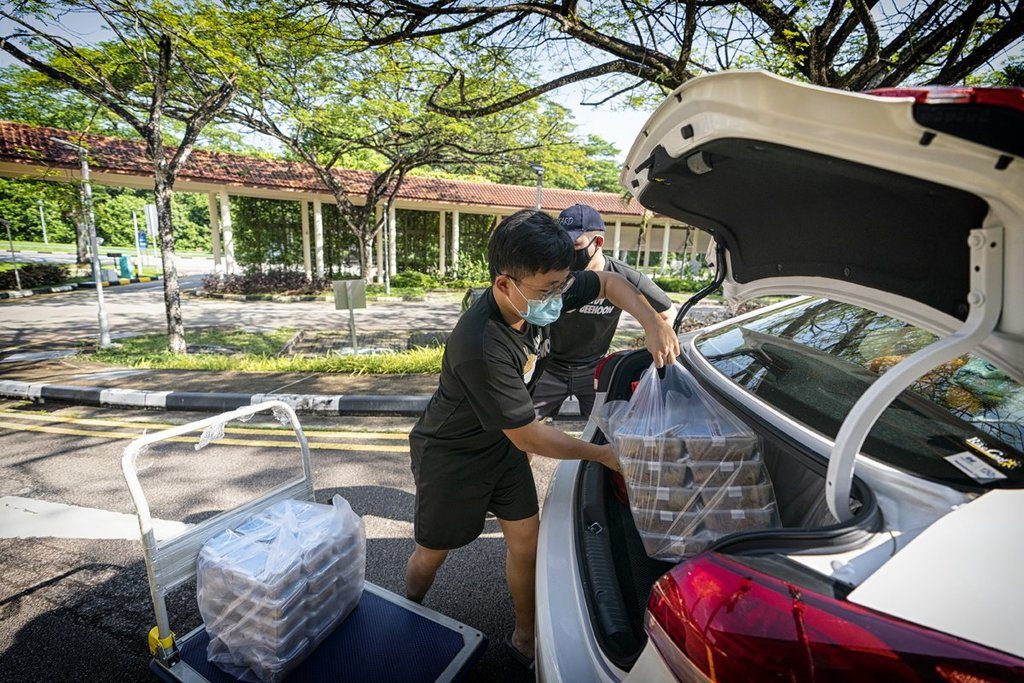 (Above) New routine. Mr Hoe loads up a car boot, in what is his new routine. He and his teammates split up the work of assisting at each of Raydy Beehoon’s partner kitchens. Before they sorted out a process, he and Mr Lee would deliver the set meals to pick up points themselves. 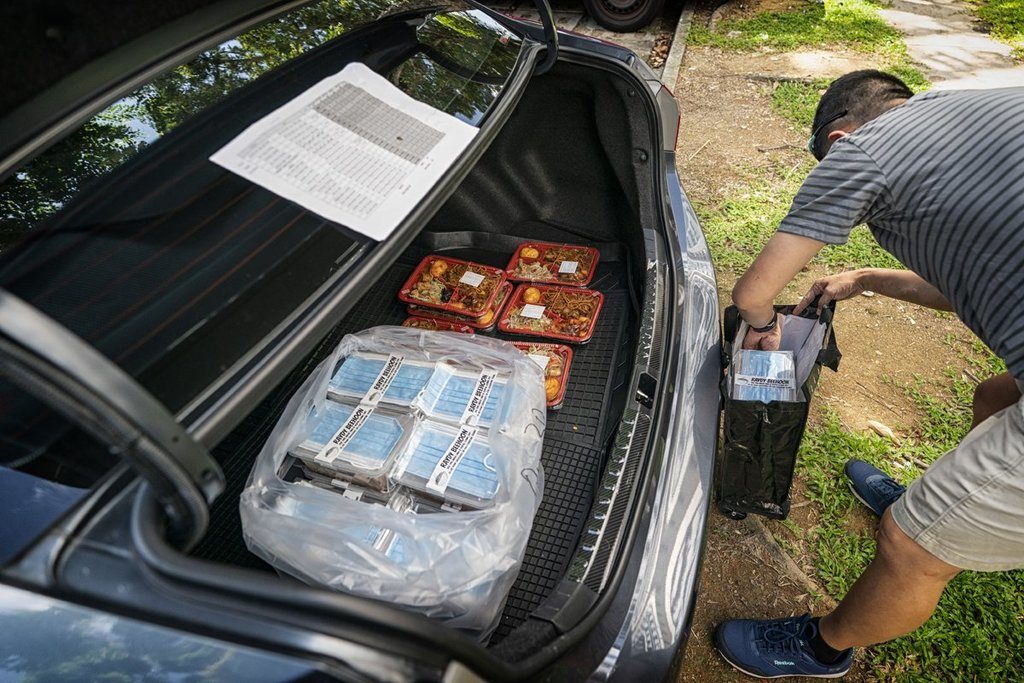 (Above) Relay express. At an Ang Mo Kio pick up location, volunteer drivers who responded to the charities collect bags of packed meals, then drive to specific addresses. Folks such as sales engineer Mr Pierre Tan, 46, who signed up with the Food Bank Singapore as a volunteer, have become used to delivering these boxes to units in Sin Ming. 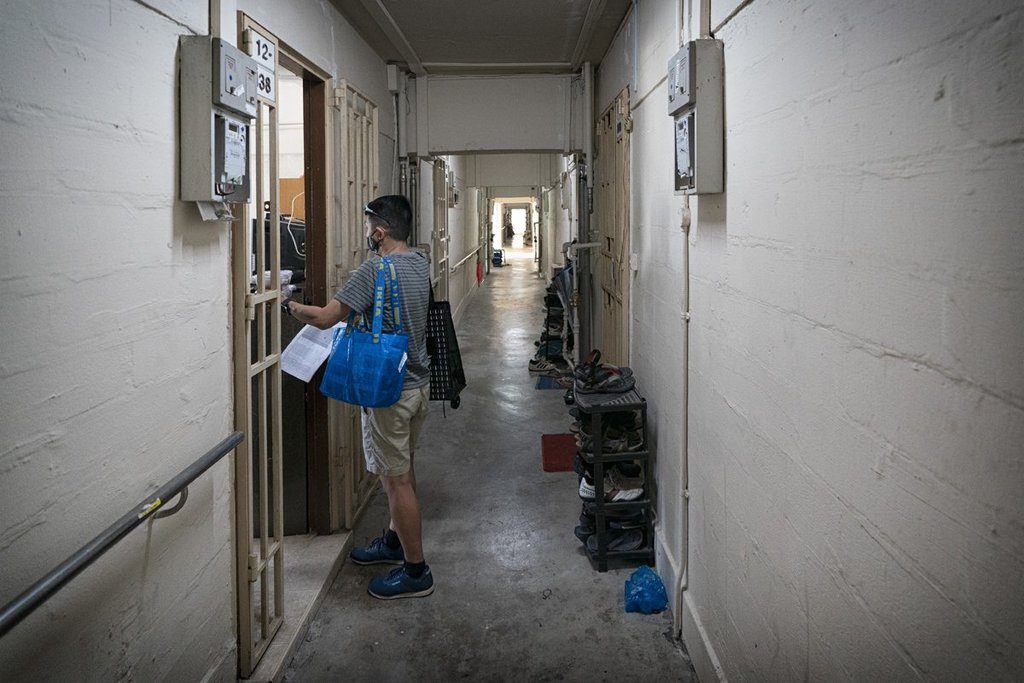 (Above) Bee hoon calling. “Chi fan!” calls out Mr Tan, to indicate he’s dropped off orders to eight units in a Sin Ming block of flats. “Lai jiak png!” Running up and down steps between floors, Mr Tan says, gets his blood pumping. Currently working from home, he said: “For me, volunteering is nothing much. I know the delivery guys are busy, and the charities need help. Otherwise I just sit at home.” 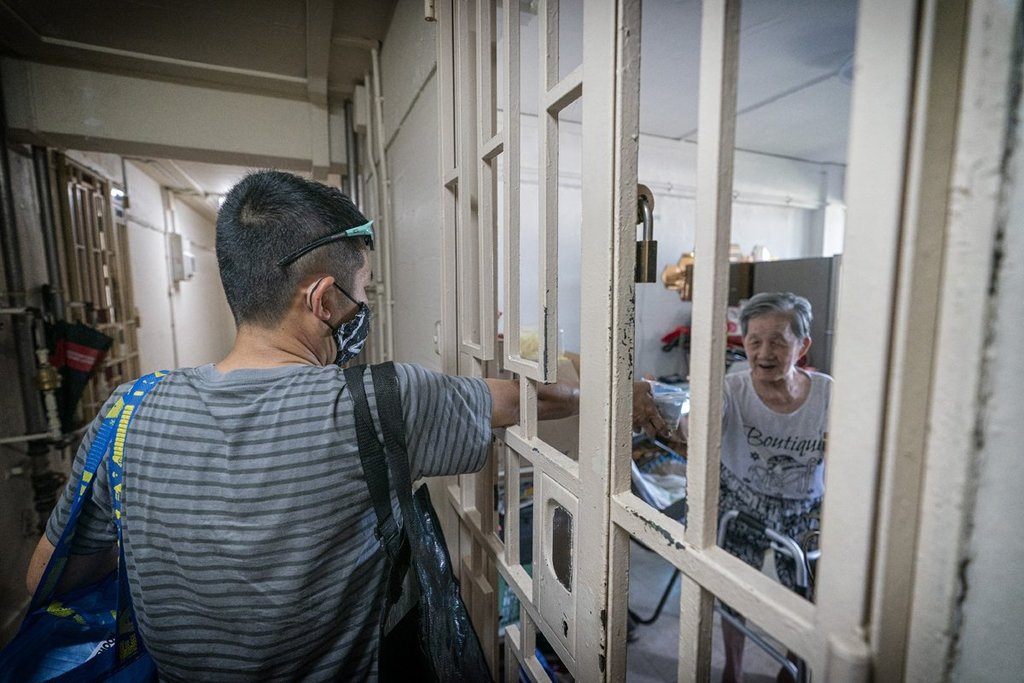 (Above) Service and a smile. Often recipients asked that their meals be left outside their gate. But this elderly woman supports herself to the door using a Zimmer frame to receive lunch, and thanks him. 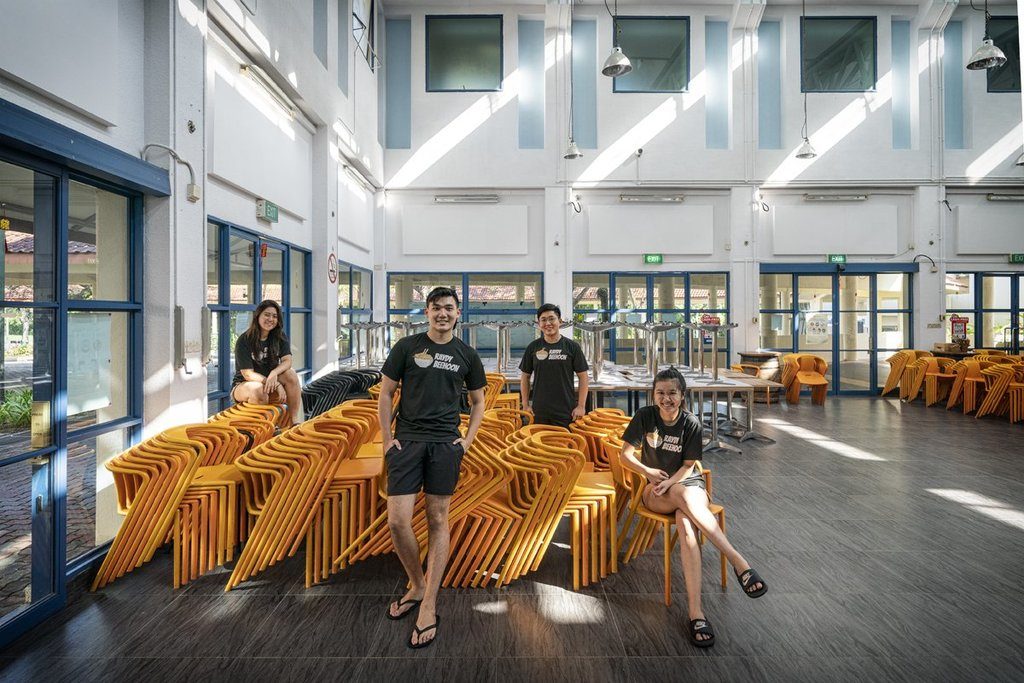 (Above) Senior management. The team behind Raydy Beehoon is united by a diversity of talent. Computer science major Mr Lee relates to the rest as their chief executive — he first sold his vision of Raydy Beehoon to his peers. Mechanical engineering major Mr Hoe functions as its operations chief, being more inclined towards operational efficiencies. Communications major Ms Lim is a natural fit for the role of chief marketing officer, while data science and artificial intelligence major Ms Ye oversees its balance sheet.