(Photo above) Mr Ganesh Kumar waters the plants at Woodlands Botanical Garden. He hopes the flowers, biodiversity, and garden community will continue to grow and thrive.

Sometimes beauty can sprout from the depths of tragedy. Few are more familiar with this than Mr Ganesh Kumar.

The sole breadwinner of his family, Mr Ganesh encountered several issues when his mother died, and all her assets were frozen.

To compound matters, his diabetic father’s condition abruptly took a turn for the worse. Doctors told him his father’s foot may need to be amputated, among other complications.

The thought of losing another family member was unbearable. Desperate for him to improve, Mr Ganesh checked his father into a private hospital, even though he knew that his insurance policy could not cover the medical bills.

“I might be old-fashioned, but my parents are the most important thing to me,” he says quietly. “After my mum’s incident, I couldn’t lose my dad either.” 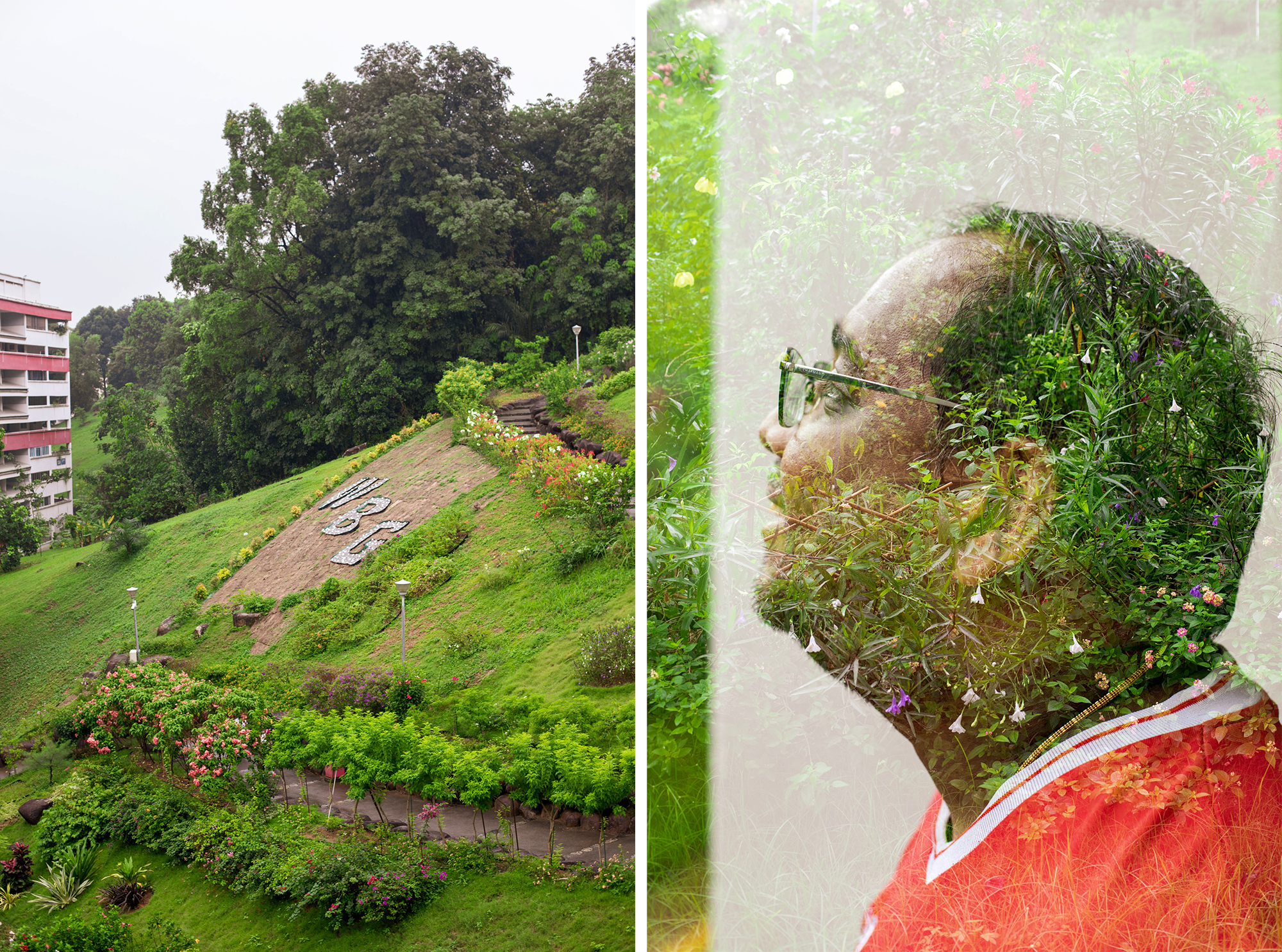 His father’s next four months in and out of hospital put an immense strain on both Mr Ganesh’s finances and mental health, forcing him to take a break from his PhD programme in Material Science at Nanyang Technological University (NTU) to recover.

With nowhere else to turn to, he immersed himself in the only refuge he had: gardening. 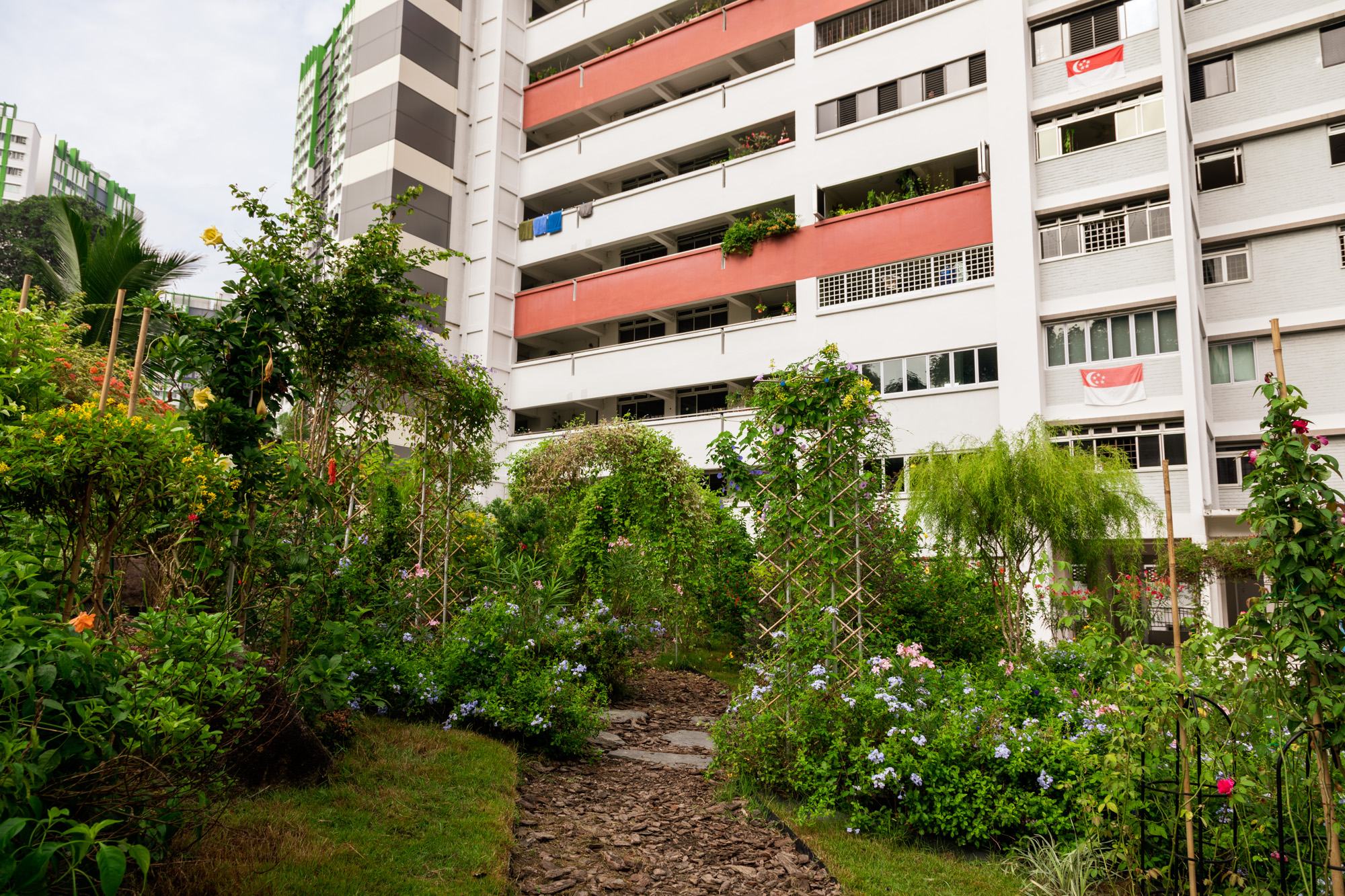 (Above) Woodlands Botanical Garden, located in Marsiling, is a hidden gem amid HDB blocks and has become a place for the community to come together, invoking a sense of the “kampong spirit”. 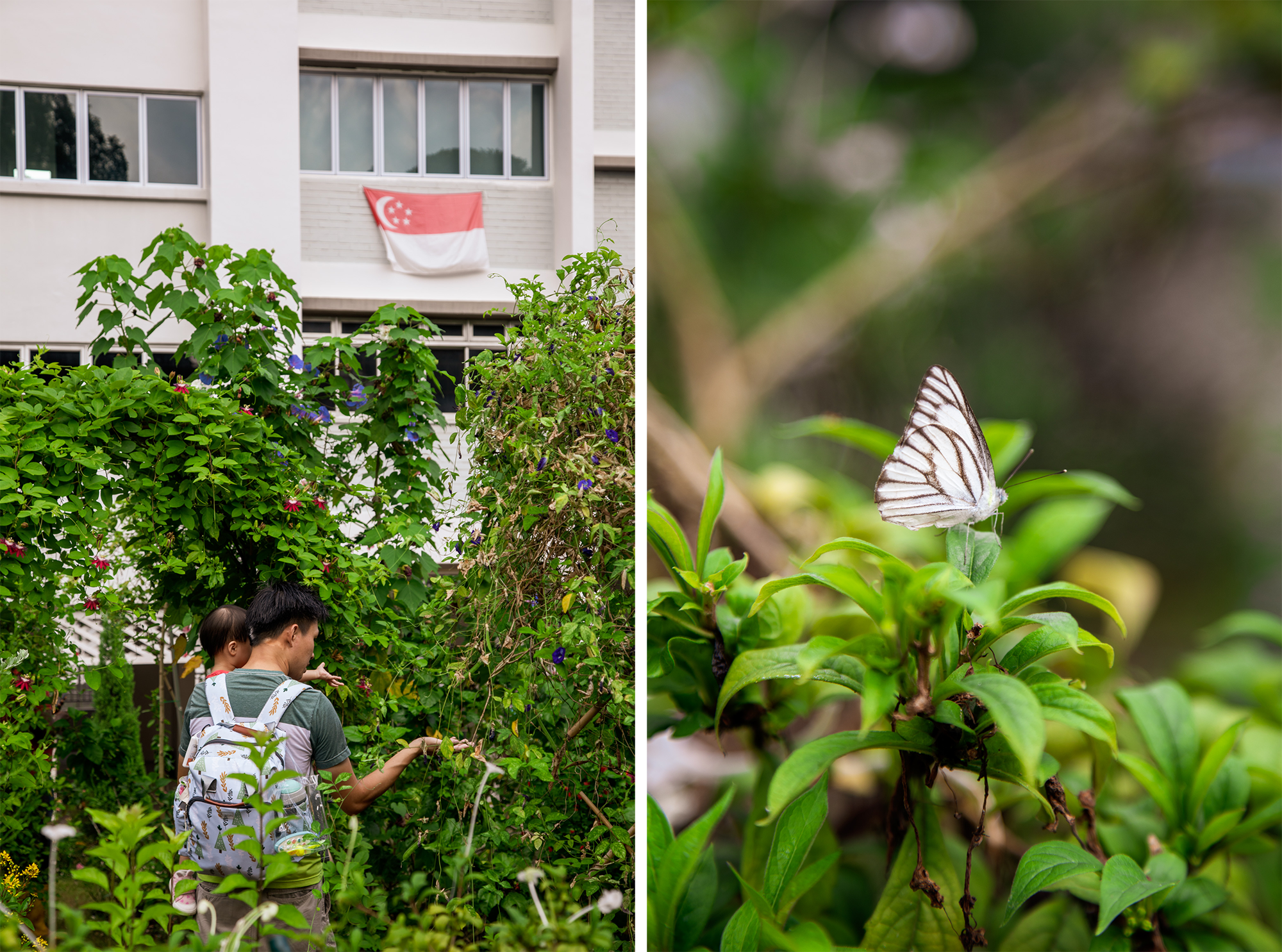 (Above left) Many families with young children come through the garden. This lets the little ones get close to nature and learn about the different blooms and insects. This experience echoes Mr Ganesh’s own memories of spending time with his grandparents while growing up. (Above right) Several species of butterflies, including this black and white Striped Albatross, are attracted to the plants in the garden.

Gardening to Soothe the Soul
In his childhood, Mr Ganesh had spent many weekends with his hands in the dirt of his grandparents’ garden, the air filled with the chatter of neighbours and family members, some pruning, some planting, some just there to chat — but all gathered in the spirit of fellowship.

Even just the sight of a flower, he says, brings back beautiful memories of those times.

Mr Ganesh started small, planting a few knee-level plants on the hill behind his house. He had seen other miniature horticultural projects scattered on the opposite side, so he reasoned it would be fine for him to do the same.

As he continued to plant, the garden began to attract bees, birds, and butterflies — people as well. 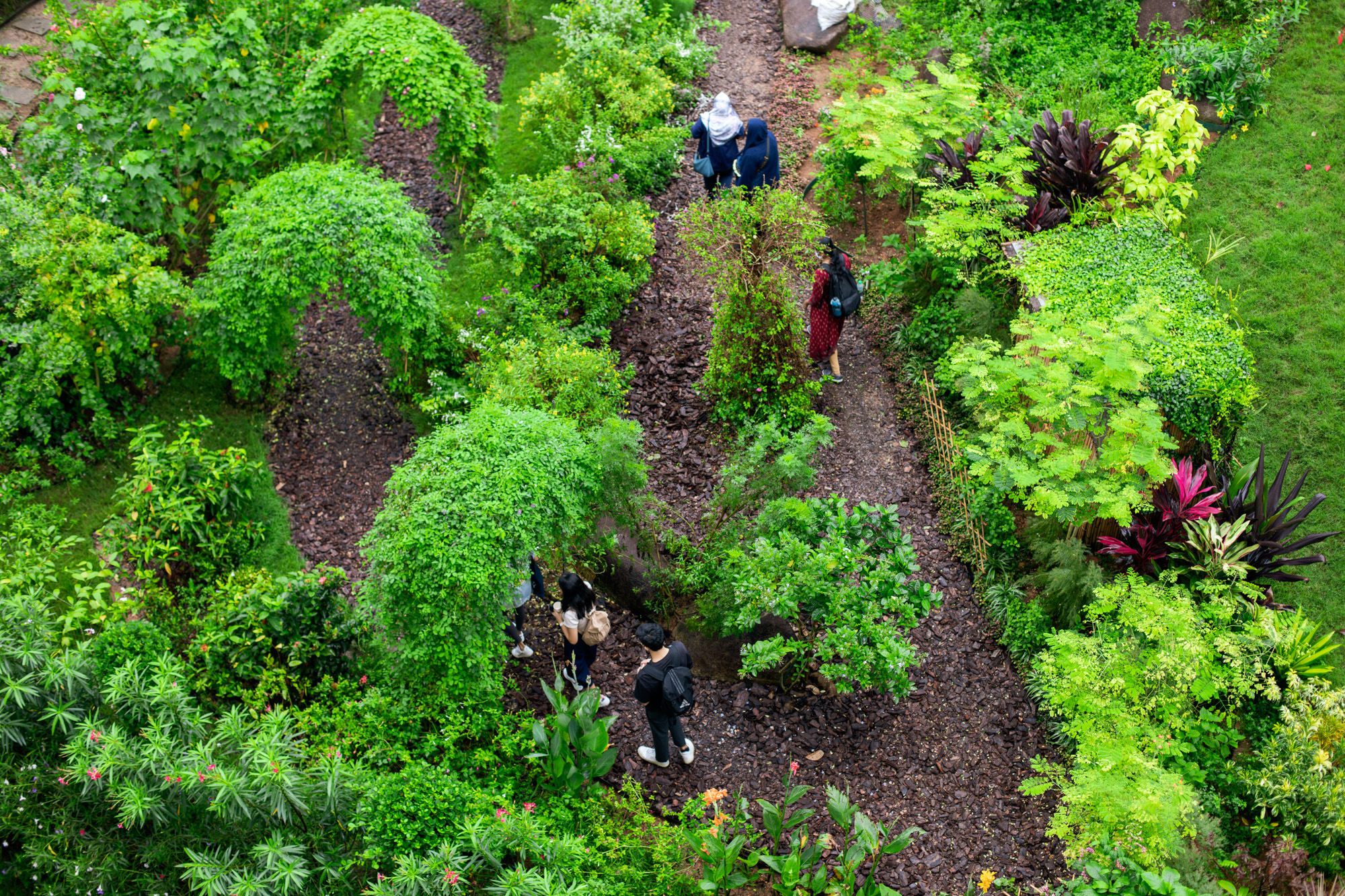 (Above) Visitors wander along the wood chip-paved path of the community garden, maintained by Mr Ganesh and his volunteers. 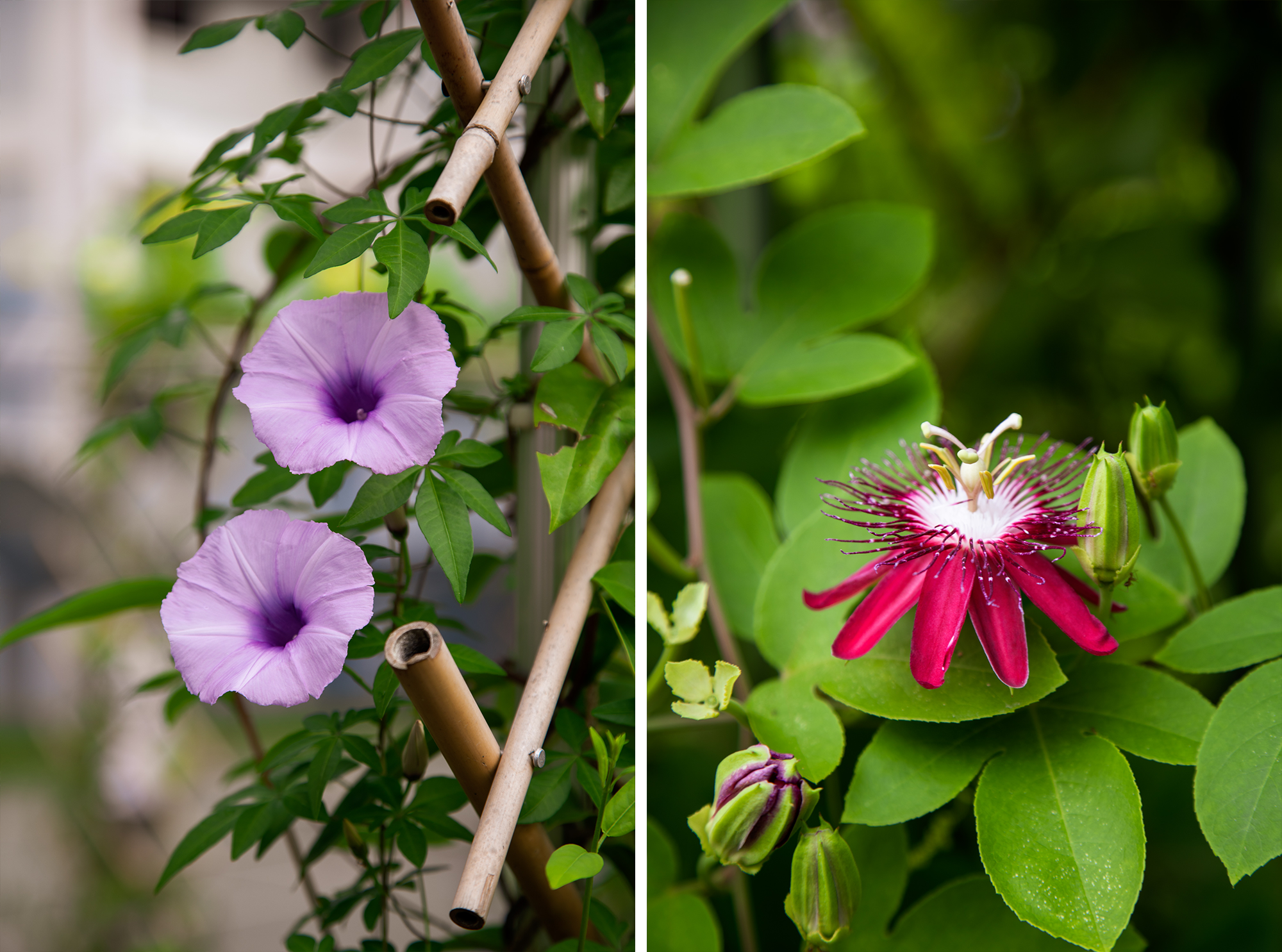 (Above left) Morning glories are perfect for growing in Singapore’s weather conditions as this climber can tolerate waterlogged soils and drought conditions. (Above right) Passionflower. Some studies suggest that certain species of passion flowers have medical benefits and may be able to help treat anxiety and insomnia.

Word spread fast. When the garden was starting to take root, there were less than 10 people a day climbing the hill. But not long after, individuals turned into scattered groups of visitors — many in their 70s and 80s. They came not just to look at the flowers and the garden’s progress but, as Mr Ganesh sensed, to talk to him.

Marsiling, by Mr Ganesh’s own description, is an old estate. “There are a lot of older residents here,” he says. “They share with me their family problems, health problems.”

It confirmed what he had already suspected from the beginning: that many of them were, in fact, lonely. Even today, many are overcome by tears when they talk to him.

“The truth is, some of these older citizens just have nobody to talk to,” he says. “Their kids sometimes don’t look after them. That’s the reality of the situation.”

These incidents drove home the importance of the garden as a refuge, not just for him but for the community at large. 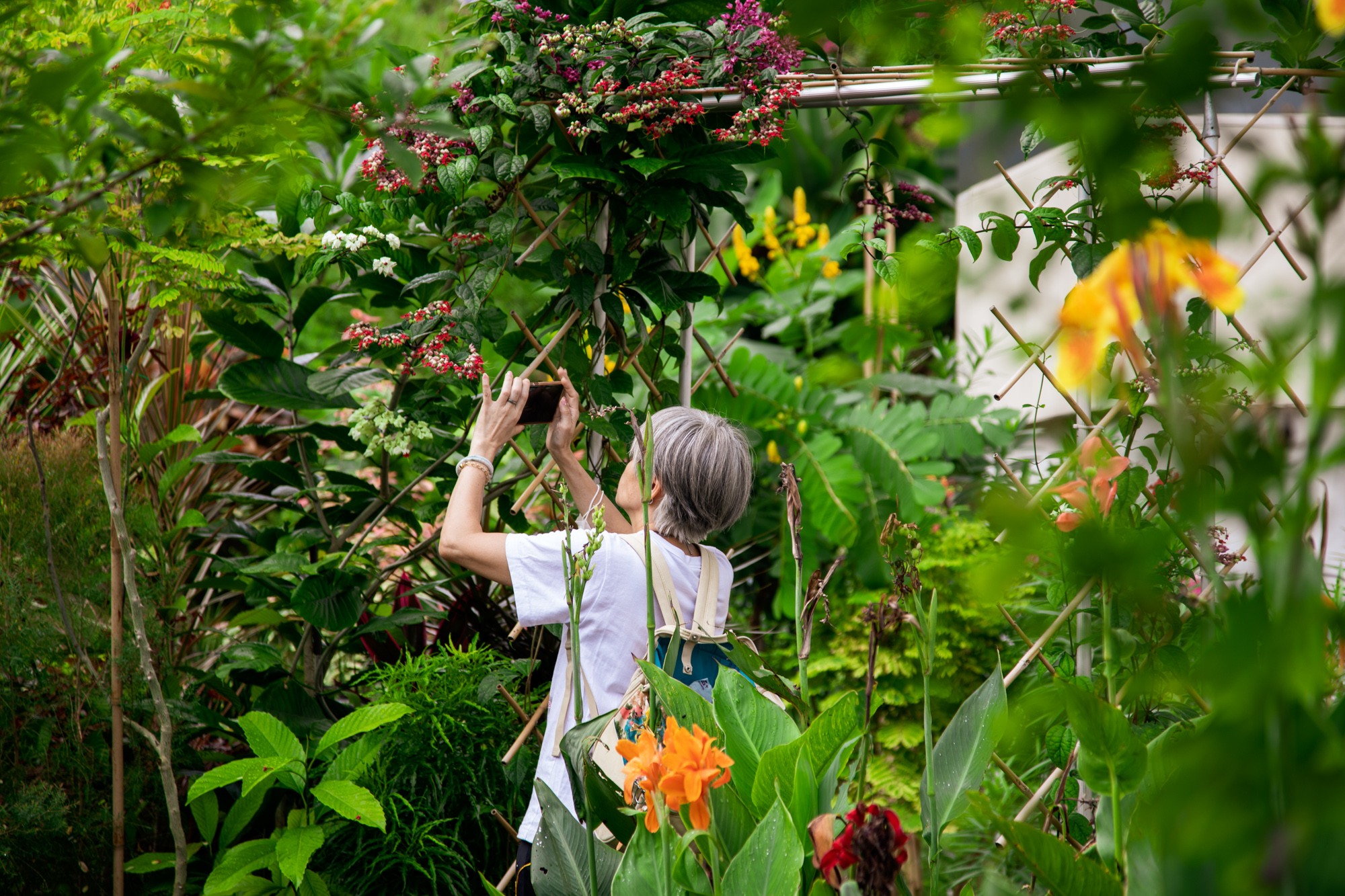 (Above) With bright and colourful flora and fauna in the garden, many visitors whip out their mobile phones to capture photographs to share with friends and family. 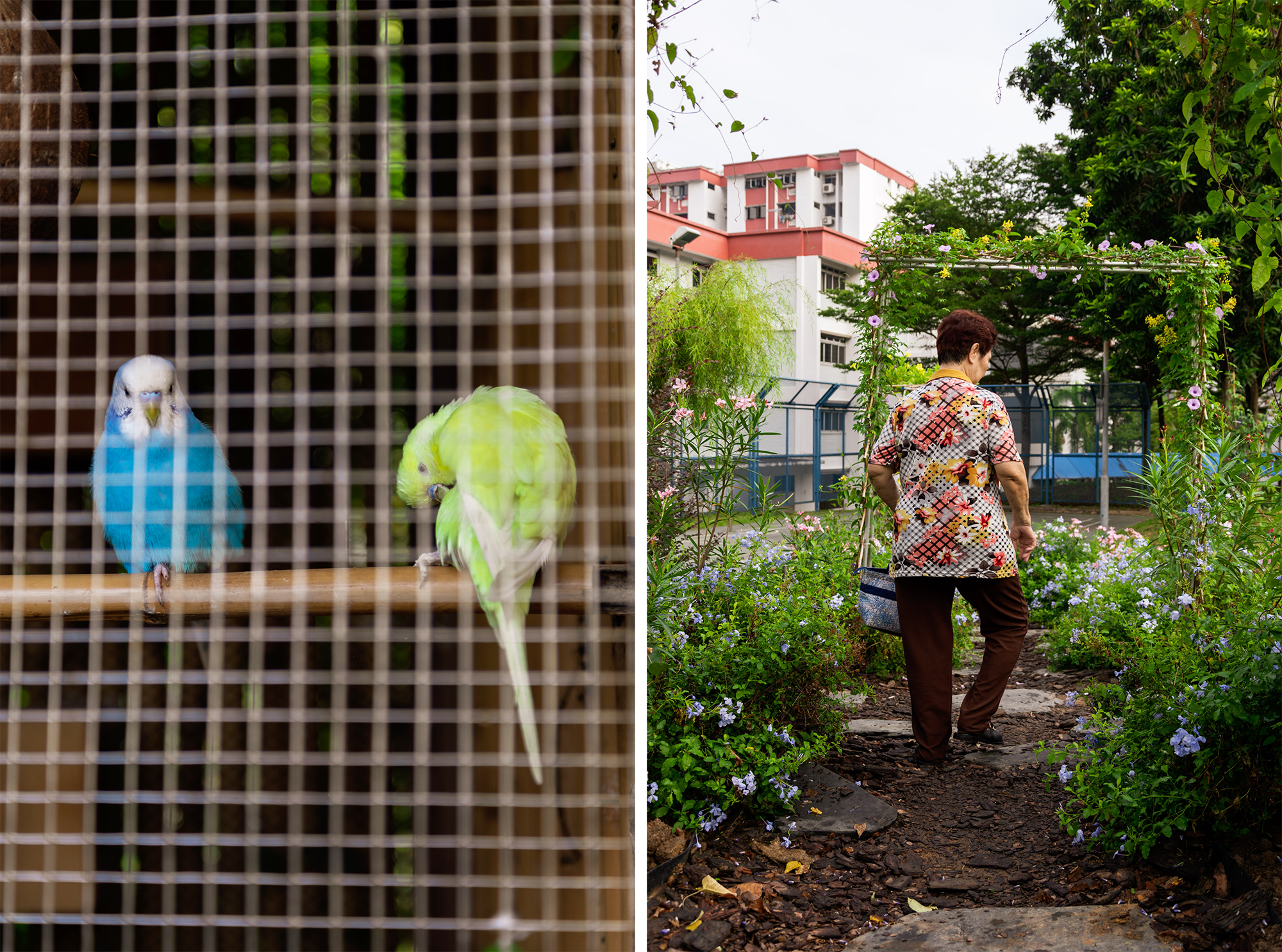 (Above left) When residents can no longer care for their budgerigars and want to release them into the wild, Mr Ganesh implores them not to, as the birds would likely not survive. Instead, they set up an aviary to house the birds. (Above right) An elderly woman traverses the garden along a stone pathway that adds a rustic charm to the landscaping; her brightly printed top echoes the colourful blooms.

Bringing Communities Together
Mr Ganesh says everybody has a story to tell, and the garden has become a place where people are willing to share these stories openly.

“Even beyond that, people started to get to know each other better,” he says. “Someone would be talking to me, and someone else would come by, and I would introduce them.

“And the next time I would be on the hill, I would see them talking to each other.”

He smiles. “Even talking about it now, I feel so happy — very blessed that this could happen.” 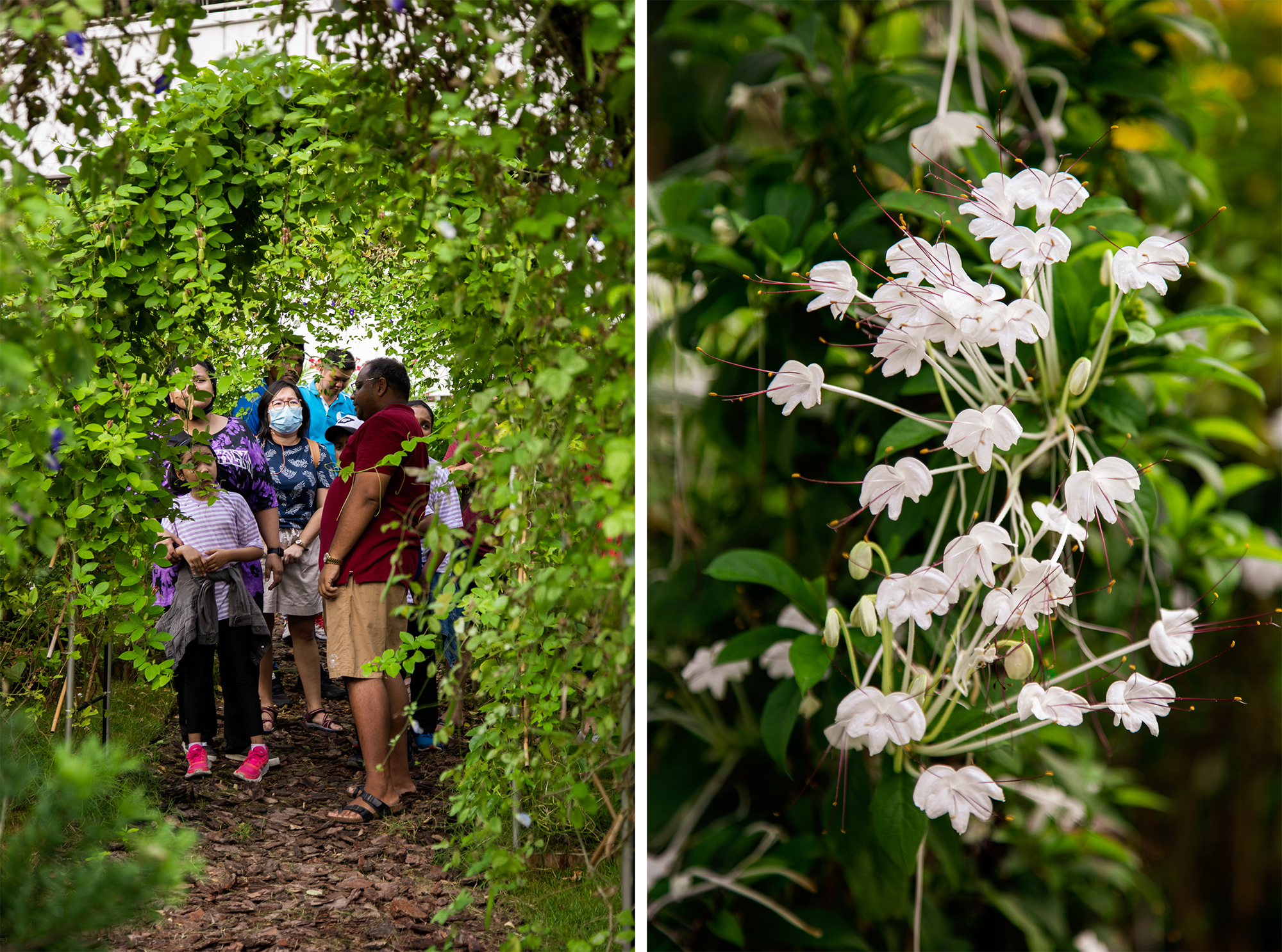 (Above left) Mr Ganesh gives a group of visitors a tour, sharing his experience growing the garden, such as how he shaped the blue pea arches. (Above right) A cluster of white do-re-mi flowers, also called Clerodendrum Incisum. 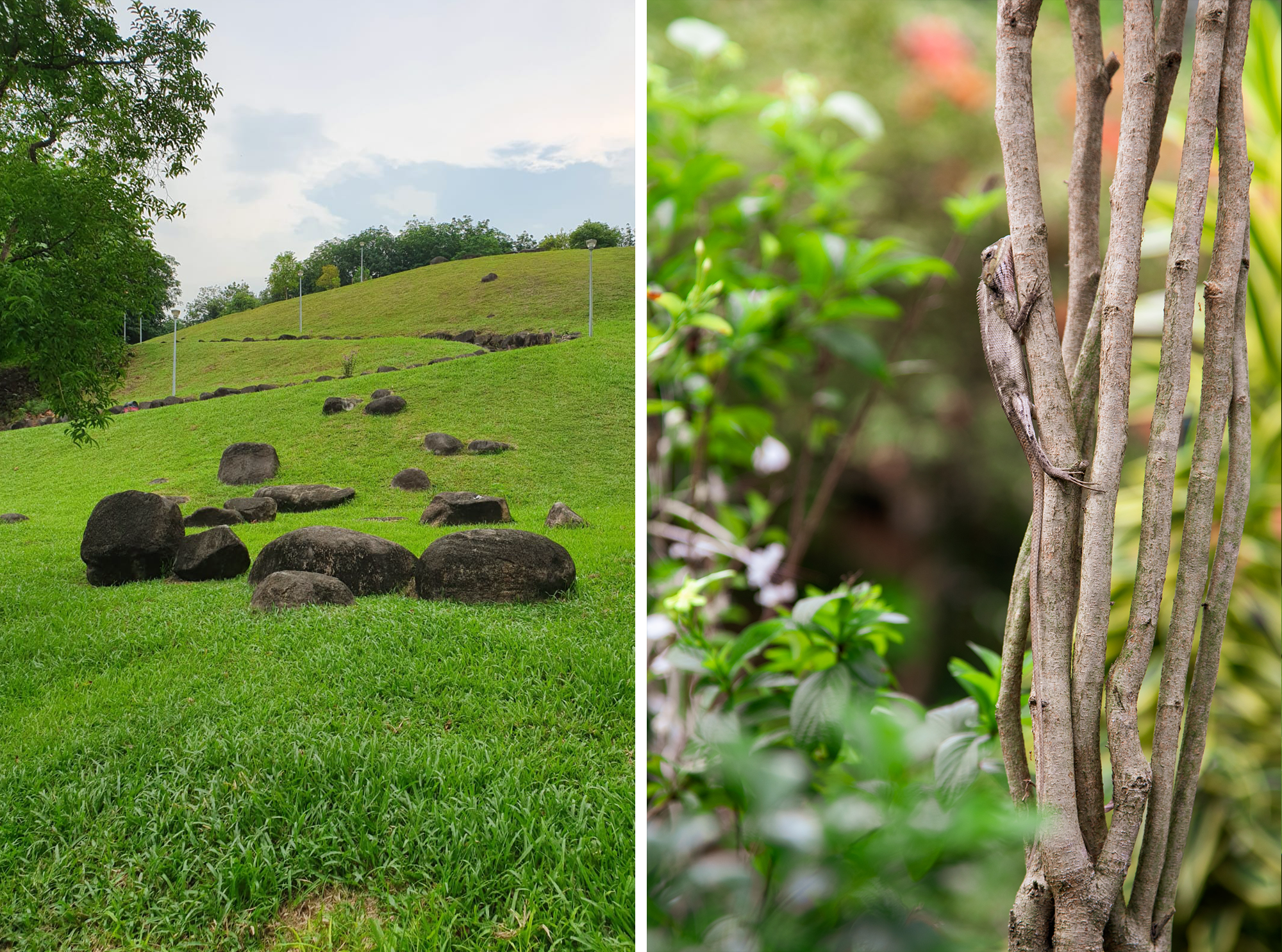 (Above left) Before planting started in 2020, the hill lacked botanical variety and nature ways to facilitate the movement of biodiversity. (Image shared by Ganesh.) (Above right) Calotes Versicolour. The oriental or common garden lizard is found widely across Asia and can grow up to 37cm in length.

Today, the garden sprawls from the foot of the hill to its crest, a nine-storey expanse of hibiscus, portulacas, bougainvillaea, mirabilis, and dozens of other brilliantly-coloured flowers.

The climb to the summit is nothing short of intimidating to the uninitiated. Many elderly visitors, including Mr Ganesh’s father, start out complaining about the Herculean task.

Finding the Small Victories in the Everyday
But Mr Ganesh strategically places the most beautiful blooms at key parts of the ascent. “You want to see the flowers? You have to climb,” he says.

And before they know it, he says, they are climbing both ways, every day, without fail. “They can suddenly do what they believed they couldn’t do before.

“Now they bring their friends with them, and they tell them, ‘eh, I also thought I cannot do; now I can do, that means you also can do it’,” he adds. 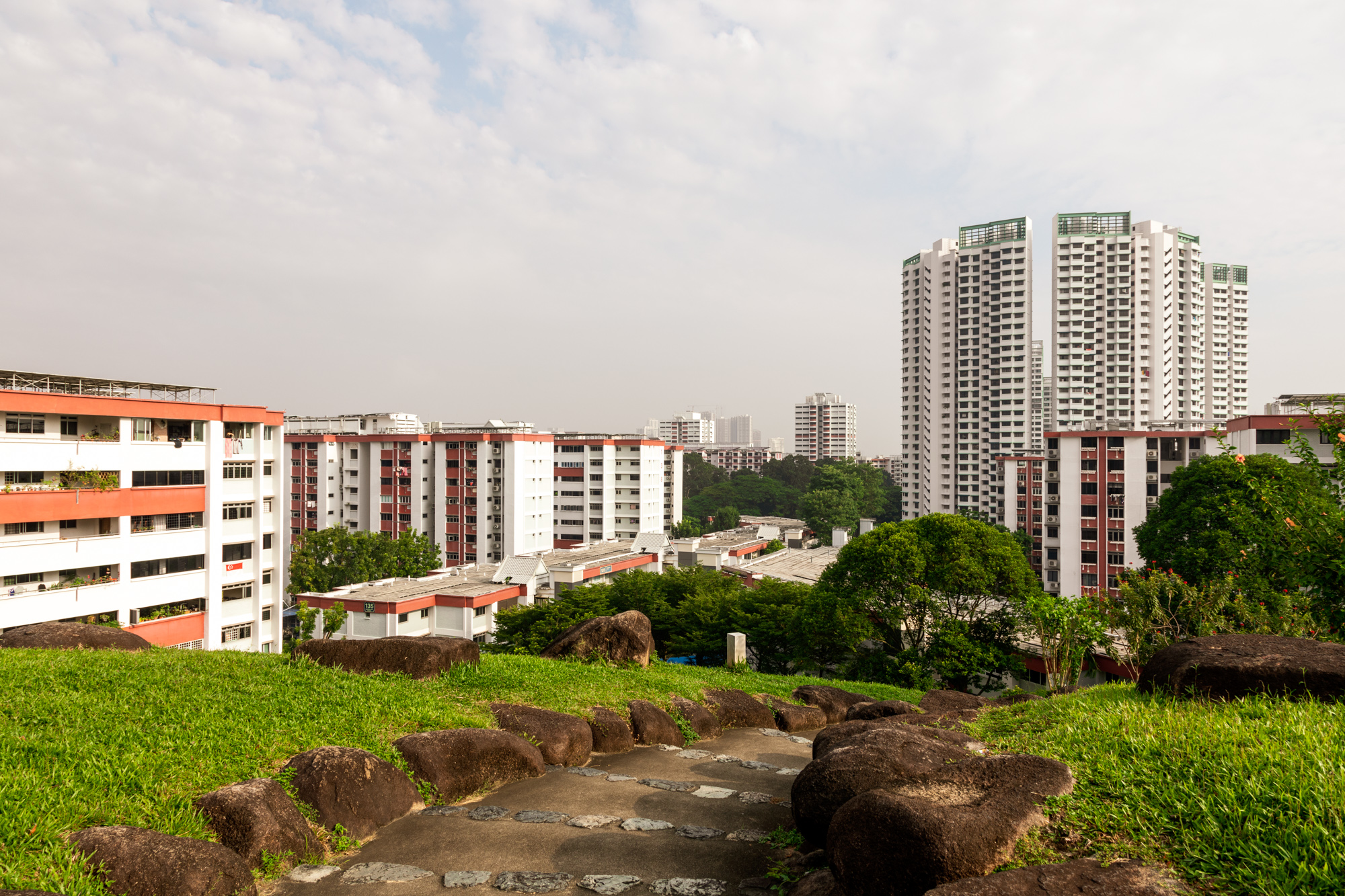 (Above) The panoramic view of Marsiling after climbing to the top of the hill behind the Woodlands Botanical Garden. 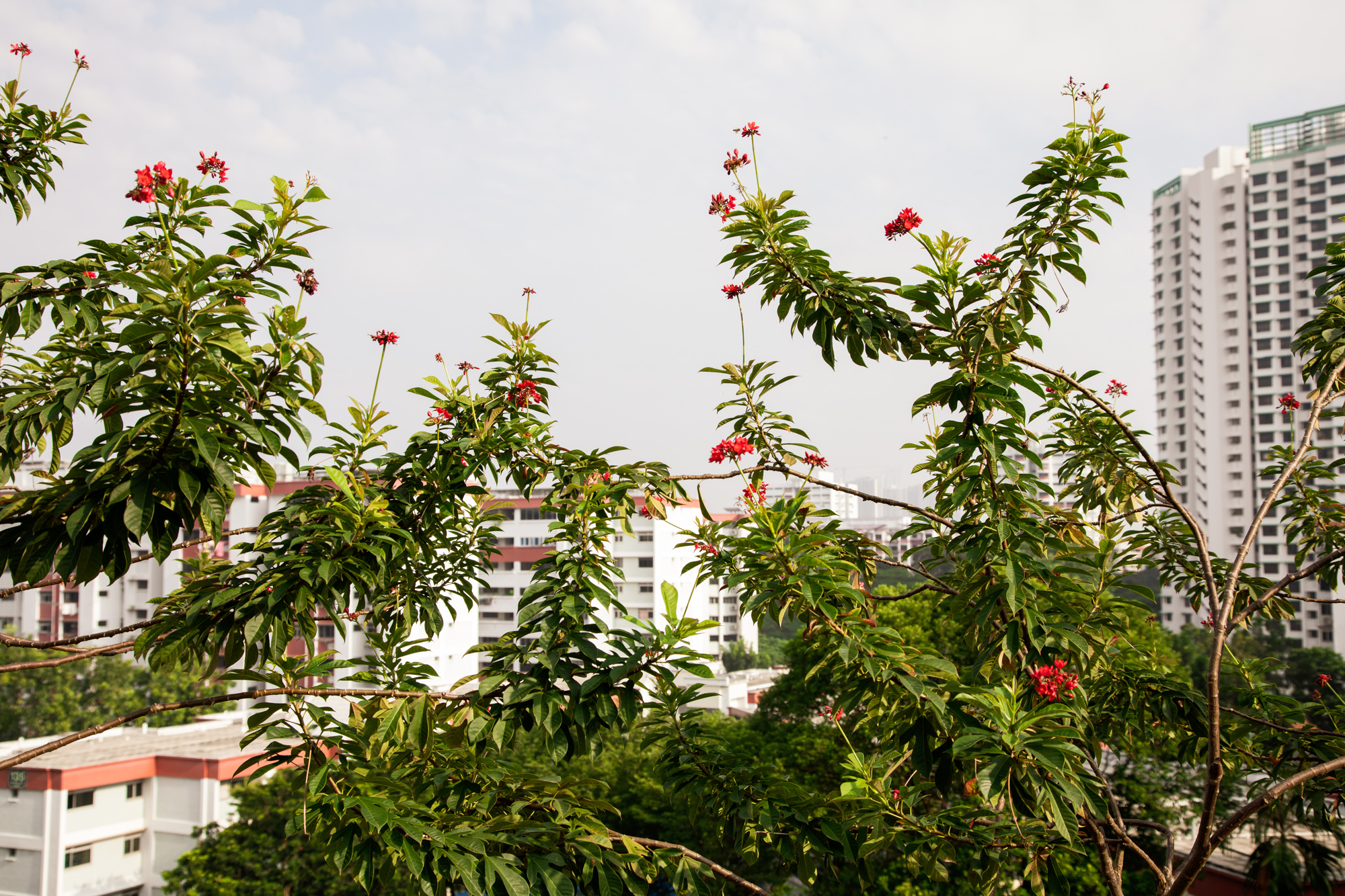 (Above) The climb to the top of the hill can be strenuous. However, the different flowers and sights that can be seen along the way take one’s mind off of the difficulties of the climb.

These “small, small victories” remind Mr Ganesh that the garden makes a big difference to people. Sometimes visitors tell him about plants they used to see in their younger years, plants their parents used to talk about, and how they no longer see them around.

Every time he hears one of these stories, he makes it a point to have them planted for the next time the visitor comes.

“The joy you see on their faces, you can’t explain it.” He pauses, remembering: “When they see something of their mum’s or their grandma’s, it’s a really touching moment.” 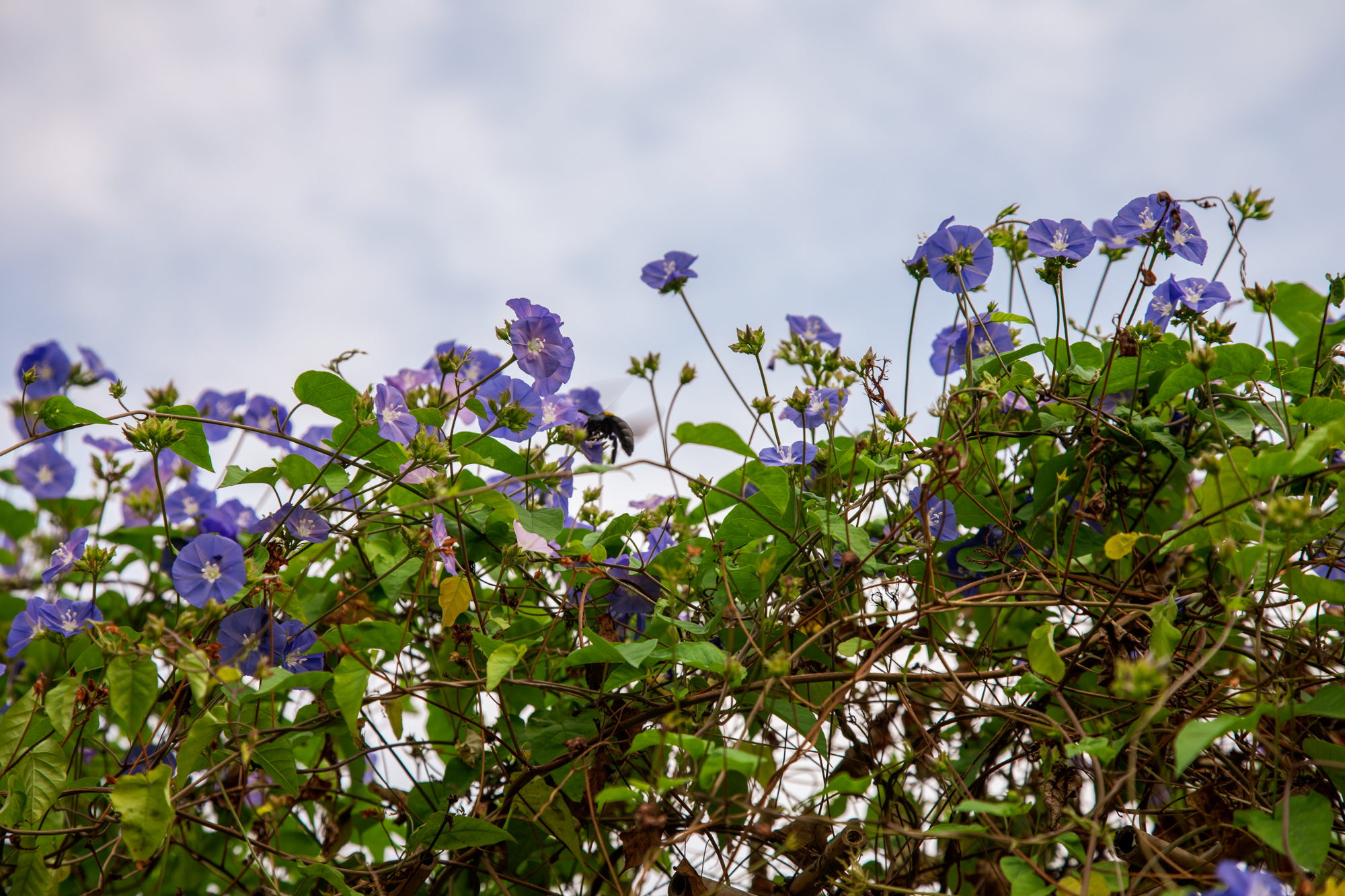 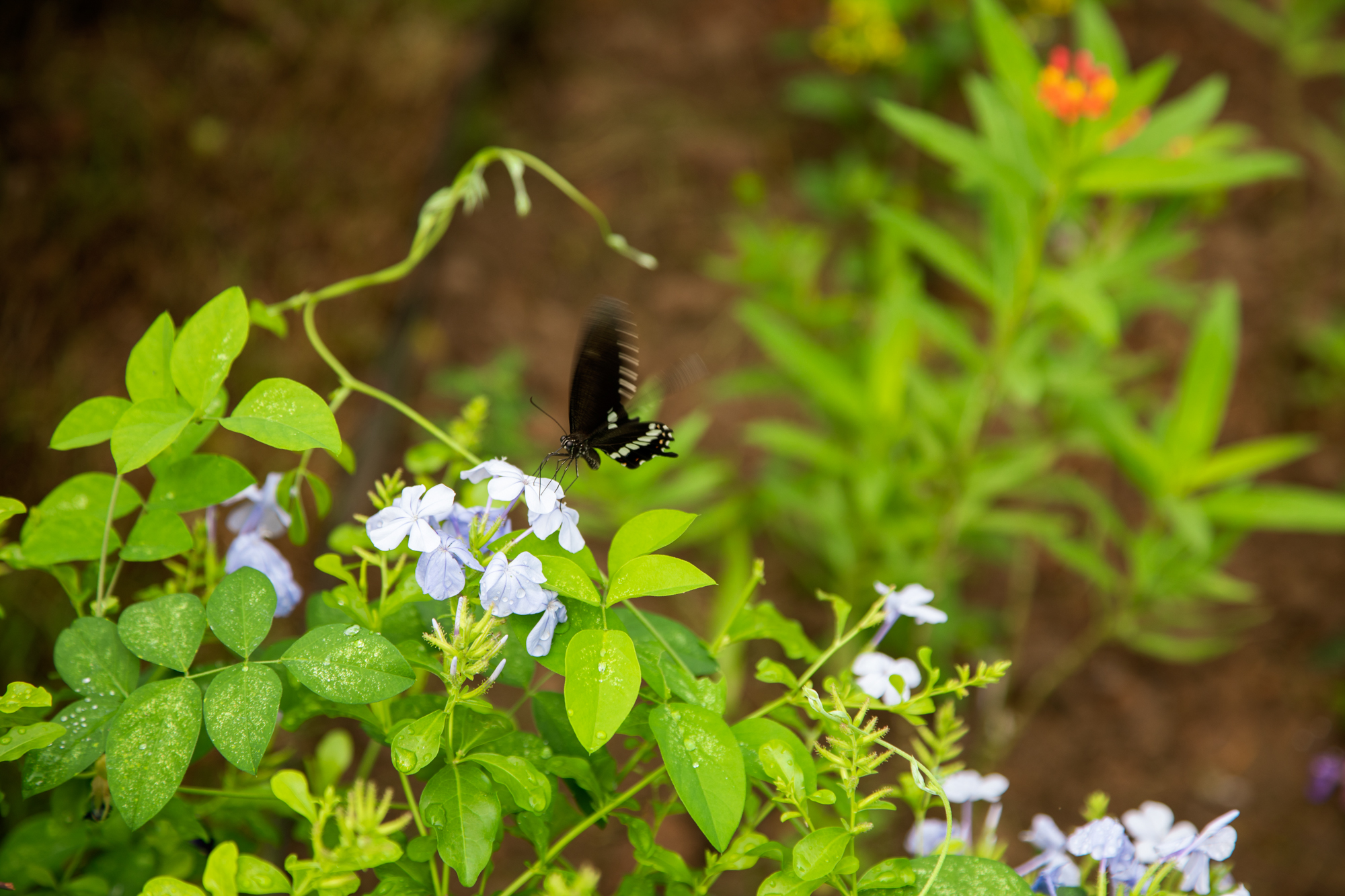 (Above) A thriving ecosystem: So far, more than 20 butterfly species and at least three bee species have been spotted in the garden.

What the garden did for him, Mr Ganesh says, can now be done for others too.

“When you’re in the garden, it’s all you can think about.” He gestures to the plants. “Suddenly, you’re not thinking about your problems; you just remember all these good times.”

And that, he believes, is what being happy is all about. “Most people tend to do the opposite, right? We hang on to the bad times.

“So we hope this garden will create many opportunities for many more good times.”