What Are You Doing SG?
Home Doers On a Mission to Rescue “Ugly” Foods
Share
Facebook
Email

(Photo above) Mr Charlie Chia, known affectionately as “Uncle Charlie” to other volunteers of the Fridge Restock Community, is the eldest of the organisation’s food rescuers.

Mr Charlie Chia is a familiar sight at the Pasir Panjang Wholesale Centre (PPWC), where he volunteers every Tuesday on food rescue missions with Fridge Restock Community (FRC).

He’d started at the end of 2020 when his daughter suggested they do something meaningful together and stay active despite the social management restrictions of Covid-19. The pandemic habit stuck.

Today, he’s known as the group’s beloved “Uncle Charlie” — traffic control, who swiftly directs rescuers at the sorting point where to drop their collections so they can zip off again.

At 73, the retired fruit and vegetable supplier is the group’s oldest rescuer — likely its most experienced, and counts friends among PPWC’s importers. After all, he was there every day for nearly 30 years, starting at 3am and bidding by 9am at daily auctions, running his family business. 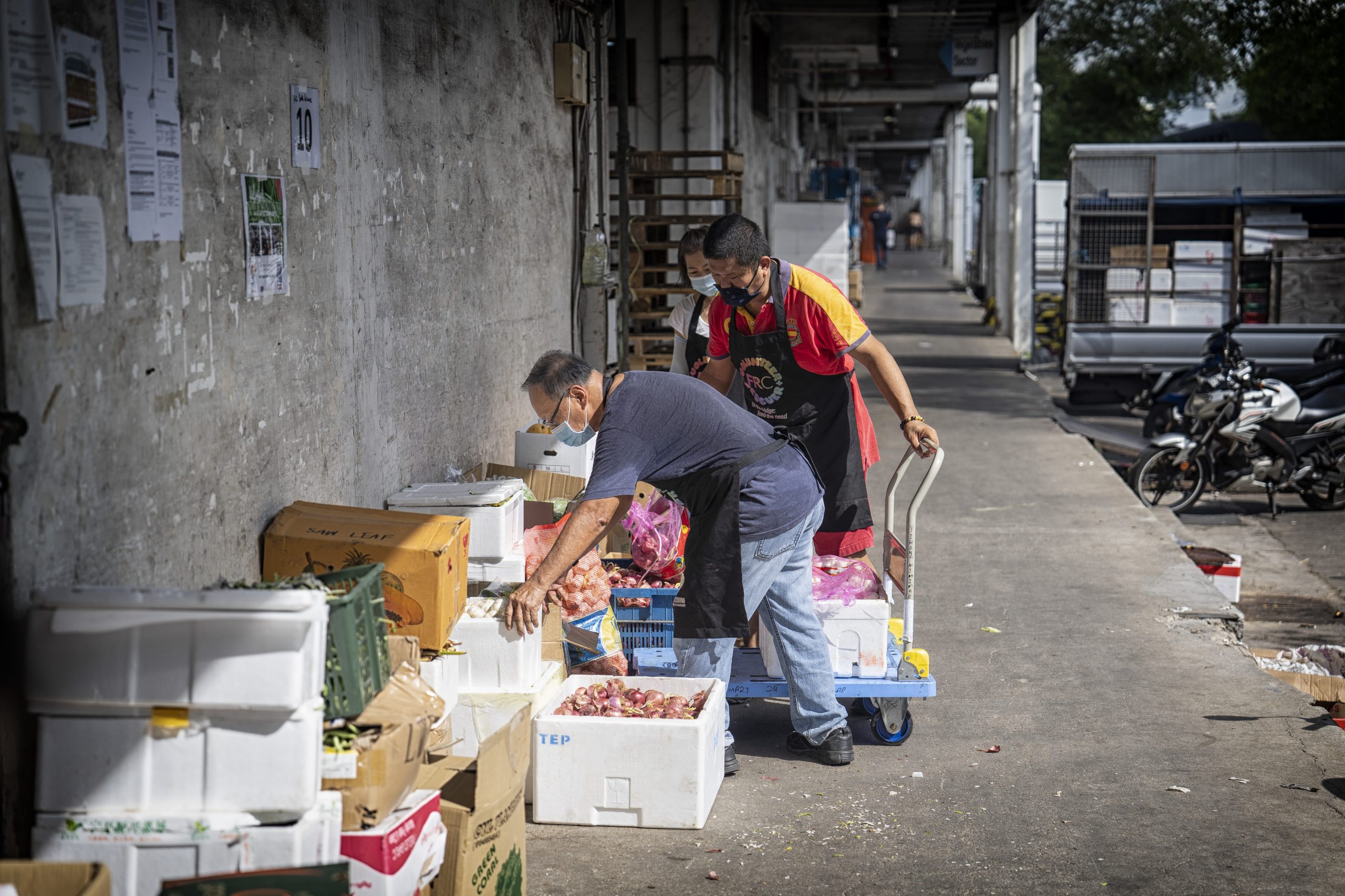 (Above) Uncle Charlie goes through some of the day’s rescued food together with FRC founder Daniel Yap.

Over those decades, he had a front-row seat watching food waste explode as Singaporeans become more affluent.

He’d begun helping his father since he was about 10 years old, when vegetables used to be traded along Carpenter Street.

When he took over the family business in the 1980s, he began to cater to growing numbers of restaurants. He had a clientele of about two dozen restaurants and food outlets that consumed carton-loads of produce daily.

Buffets were big culprits of food waste, he observed, dumping untouched perishables after each service. “They had a lot of pastries — nice pastries! But they didn’t give it to their staff to take home. They didn’t give it to anybody. They said if you gave the staff, it would cause problems like stealing, and they’d have to monitor it,” he remembers.

“So they just dumped it all. All the wastage! I see already heart pain! Nice pastry, they just threw it all away.”

He would watch importers bin pallets of surplus produce from overseas and Malaysia, or if it was partially damaged during transportation. 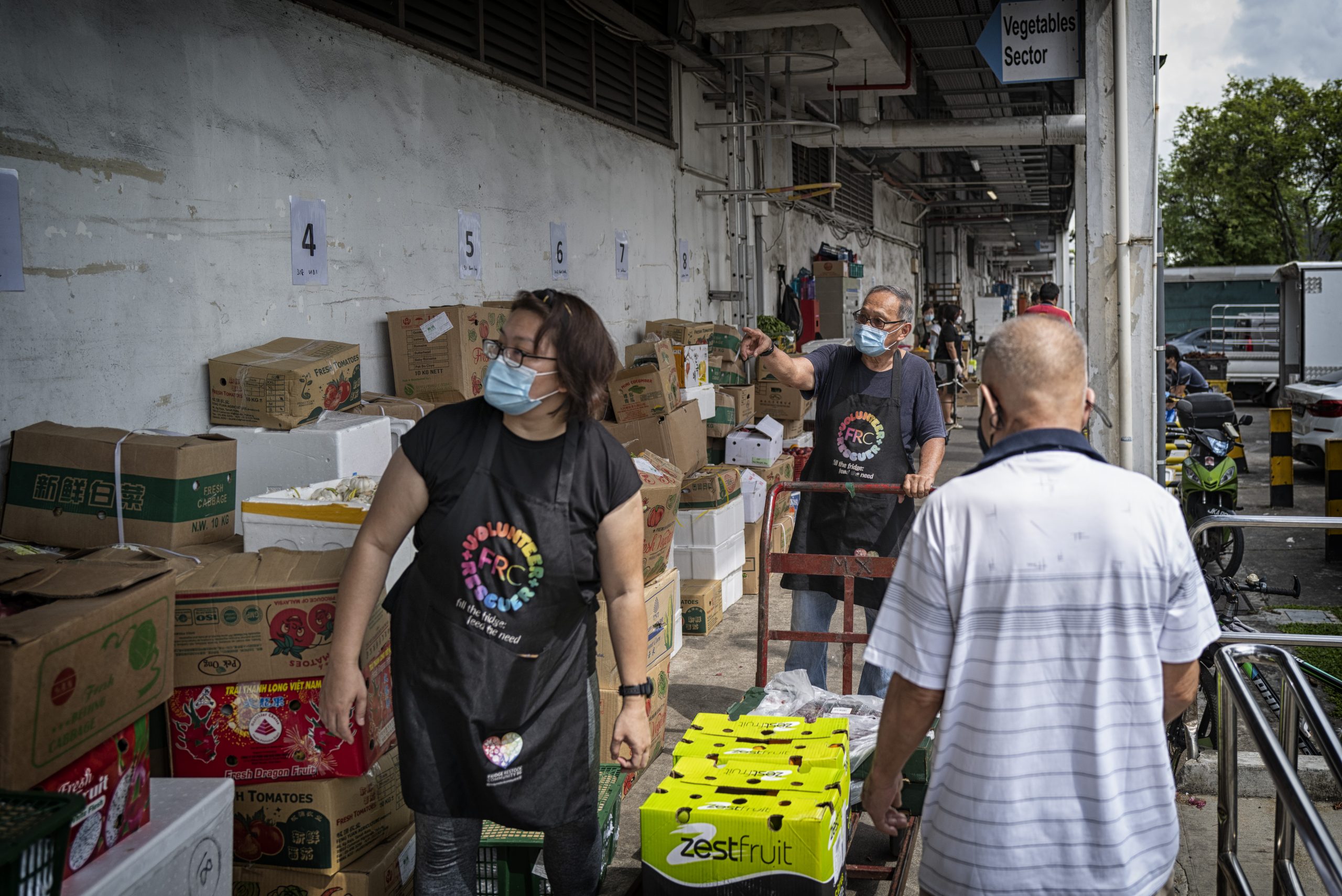 “Saving food means saving money!”
What he did do is drum into his five daughters never to waste food, to be frugal, and take only what they could finish.

“Sometimes, papaya from Malaysia would get pricked by the basket or get a bit crushed during transportation, and you cannot sell it. Either you throw it away or you bring it home to eat,” he said. In fact, his daughters grew up eating “ugly” fruit.

Through the 1980s and 1990s, as the nation became wealthier, so did its appetite for diverse foods. The strawberries stocked everywhere nowadays were once available only at Christmastime, at exclusive outlets, he said, and iceberg lettuce only came from Australia.

With globalisation, imports now arrive from more countries, and spoilage during shipment has lessened because of better refrigeration.

But food waste has spiked, he said, and it’s a shame. 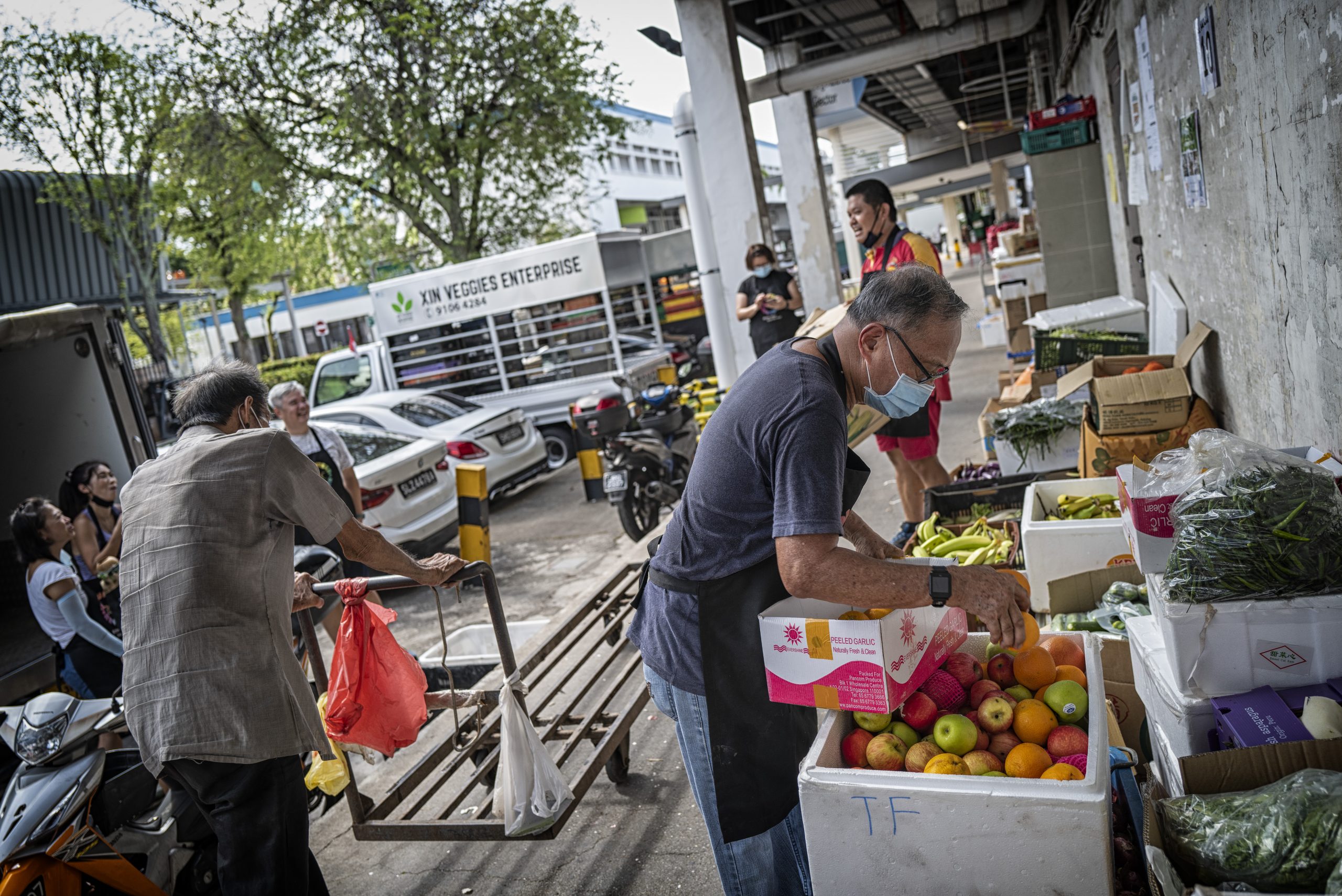 (Above) After years of working as a fruit and vegetable seller, Uncle Charlie is well equipped to sort through produce for distribution.

“You think about what goes into food. They plant, then they harvest, then transport all the way here, then it goes into the bin. All the resources and energy wasted. Somebody has to do something about all these things.”

Being part of food rescue missions is personal, and he thinks nothing of pushing fully loaded trolleys. He has, after all, done it since he was a boy and every day as a supplier.

He reckons the emergence of rescue groups is generating awareness among PPWC’s sellers who “are quite willing to give up food” when asked. In the past, without organised redistribution, it was easier for them to chuck it all out.

Having rescue groups enables wholesalers to give what they can. Other than one or two who turn rescuers away, most have become used to them. “Sometimes, we don’t even have to ask them. We just put on our aprons. They know that we are rescuing fruits and veggies for the community. They know we come on Tuesdays and Wednesdays, and set it aside instead of throwing it away.”

As food prices escalate, he feels it’s time to turn up the volume on public education and highlight how saving food means saving money too. 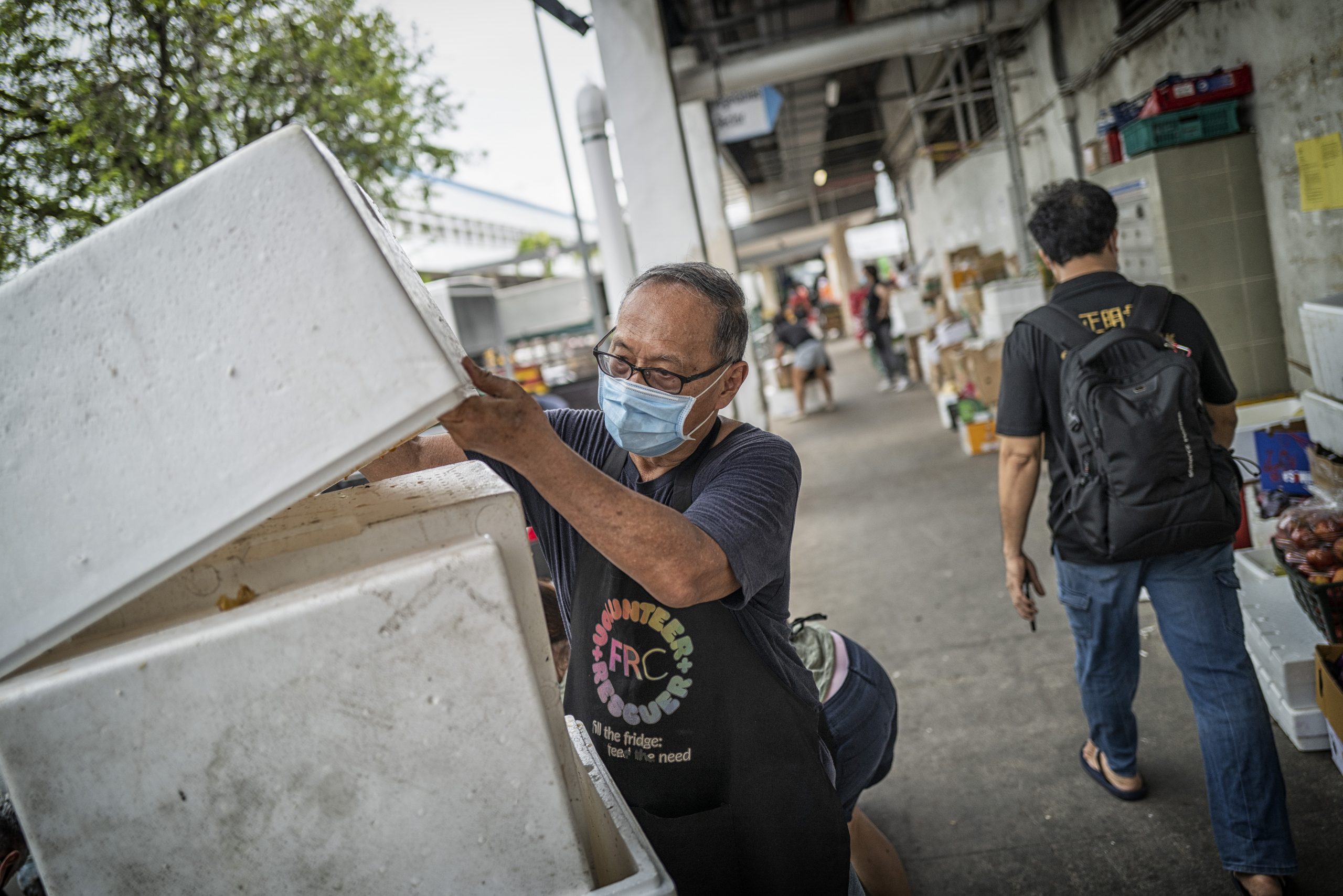 (Above) Uncle Charlie stacks styrofoam boxes for reuse during the restocking exercise.

That, and revisiting forgotten practices from simpler times, such as buying only what you can finish, auditing your fridge, or just being a considerate neighbour. Mr Chia, for instance, shares rescued food with an older friend to help him save money.

“He’s so happy; he keeps saying he wants to buy me kopi,” Mr Chia chuckles. “It doesn’t mean you have to give to low-income or poor people. As long as it’s not wasted, it’s good!”

Consuming excess before buying more is a healthy boomer attitude, he says, adding that his generation is generally cost conscious. Bringing back some of that thinking can help battle climate change.

“You shouldn’t have this mindset that ‘I shouldn’t take because I can afford to buy.’ I think if there’s excess, take it. If there’s somebody else who needs it more, give it to them. I don’t think there’s any shame in it.”

Read more about the food rescue scene in Singapore here and be inspired to live a zero waste lifestyle.