What Are You Doing SG?
Home Stories Musicians Take Their Show on the Road in Esplanade’s First Music Truck
Share
Facebook
Email

(Photo above) It’s a socially distant year-end concert as Two Of Us perform to seniors at the St John’s Home for Elderly Persons from the Esplanade’s music truck – part of outreach programme, Esplanade on the Go.

Call it a moving performance. For duo Two Of Us — musicians Mr Earnest Chua Kin Hee and Ms Pang Choy Ting — a truck-stage became a first-ever experience as they performed to seniors at St John’s Home for Elderly Persons.

While the pandemic kept crowds from the full theatre experience, it also opened the arts to new and unexpected audiences. The husband-wife team of Mr Chua, 42, and Ms Pang, 32, played two 30-minute sets, or about 16 songs, including classics such as “You are My Sunshine” and “Edelweiss”.

Playing from the venue’s parking lot to seniors watching while seated in the shade, was an experience Mr Chua called “unique”.

“We can’t really perform outdoors all the time like we used to. But with this music truck by Esplanade, we’re able to reach out to people and bring joy to everyone.” 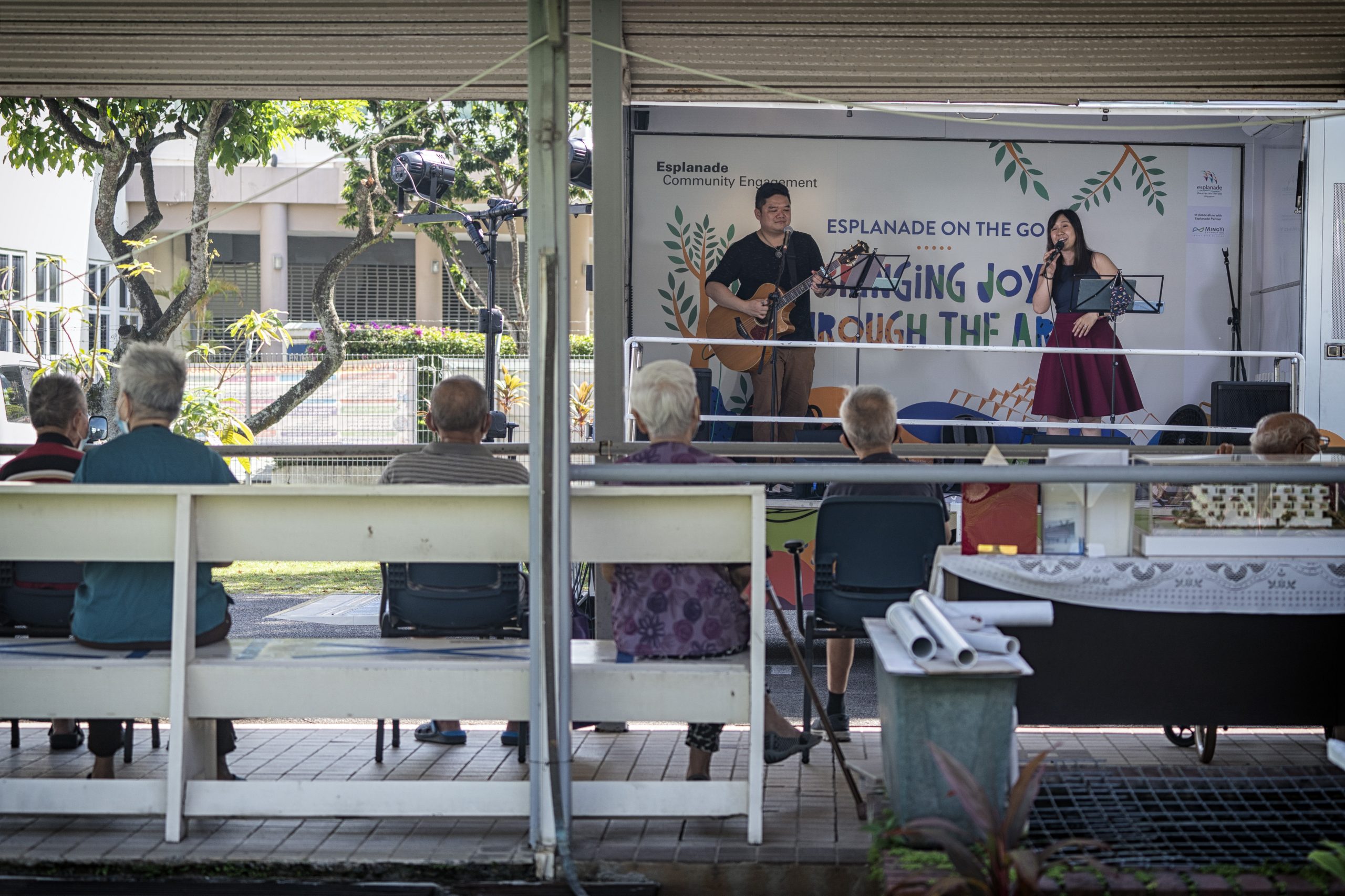 (Above) This ain’t no food truck. Instead, Ms Pang Choy Ting and Mr Earnest Chua, who usually play at outdoor venues, deliver two 30-minute sets as volunteer musicians, getting the crowd going with tunes such as “Edelweiss” and “You Are My Sunshine”.

Esplanade – Theatres On The Bay’s Esplanade on the Go music truck aims to reach as many seniors as possible. If well received, this pilot, which runs from November 30 to December 5, could become an annual tour.

“Since they can’t come out, we tried to explore if we could bring the performances out to them,” she said. “That’s how we came up with the idea of the Esplanade on the Go music truck.”

The idea of entertaining senior welfare home residents with music took shape in May, during the Circuit Breaker, and was launched on Monday, November 30. 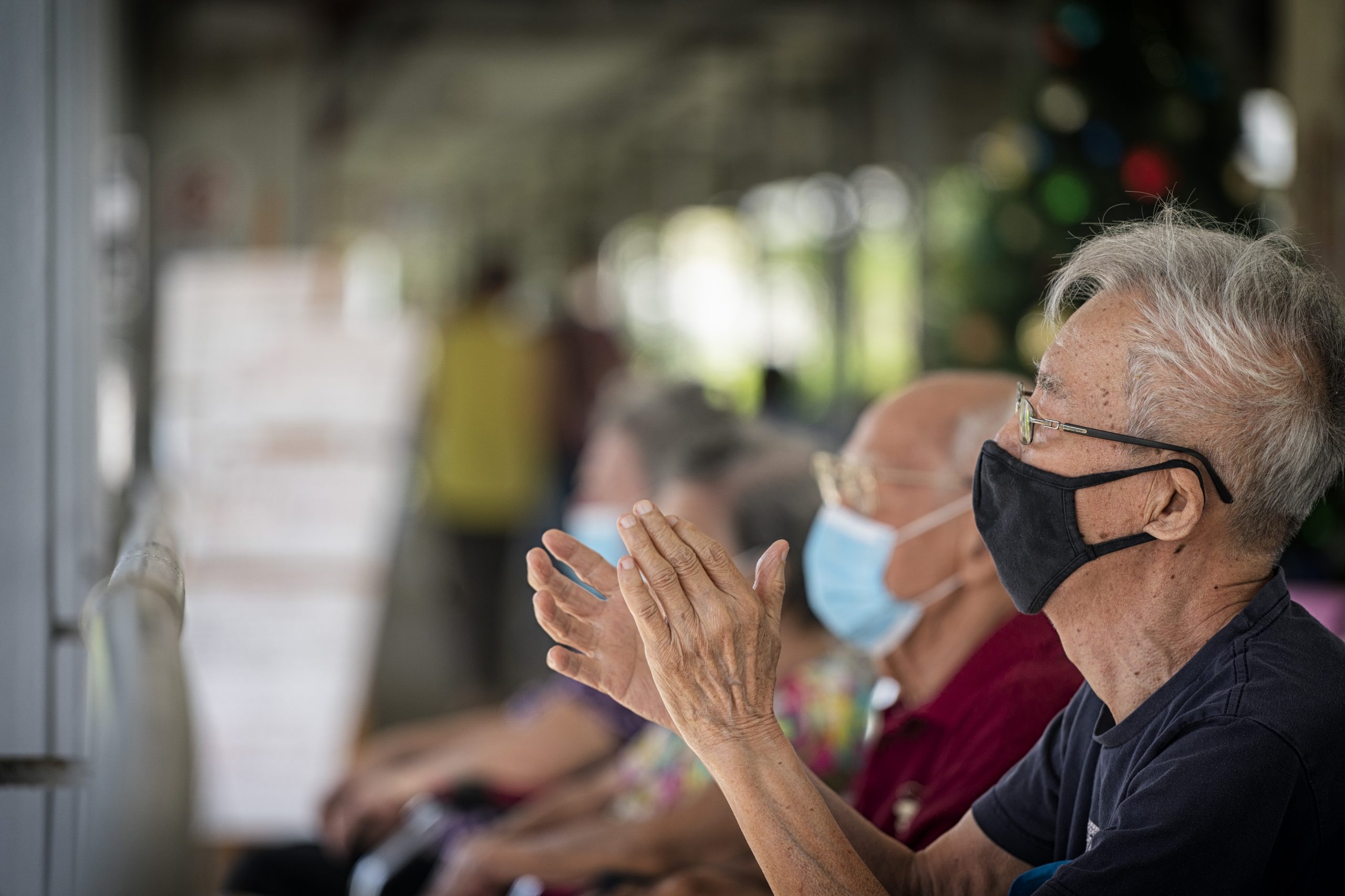 (Above) Residents thrill to the tunes as they relax in the shade.

Other tour stops this week include Bishan Home for the Intellectually Disabled, Blue Cross Thong Kheng Home, and the Institute of Mental Health.

To reach all residents, some musicians will play multiple sets at each location. All performers are artists who have also performed at the Esplanade before.

When the tour wraps, the Esplanade will evaluate feedback from staff, residents and performers, though Ms Low said audiences thus far seemed “thrilled”.

Two Of Us found the audience’s reactions rewarding. Mr Chua said: “Nearly 85 to 90 percent of those who were able to move were dancing, standing up and cheering for us. That’s a very unique side for us, to see elderly jumping and singing along.” 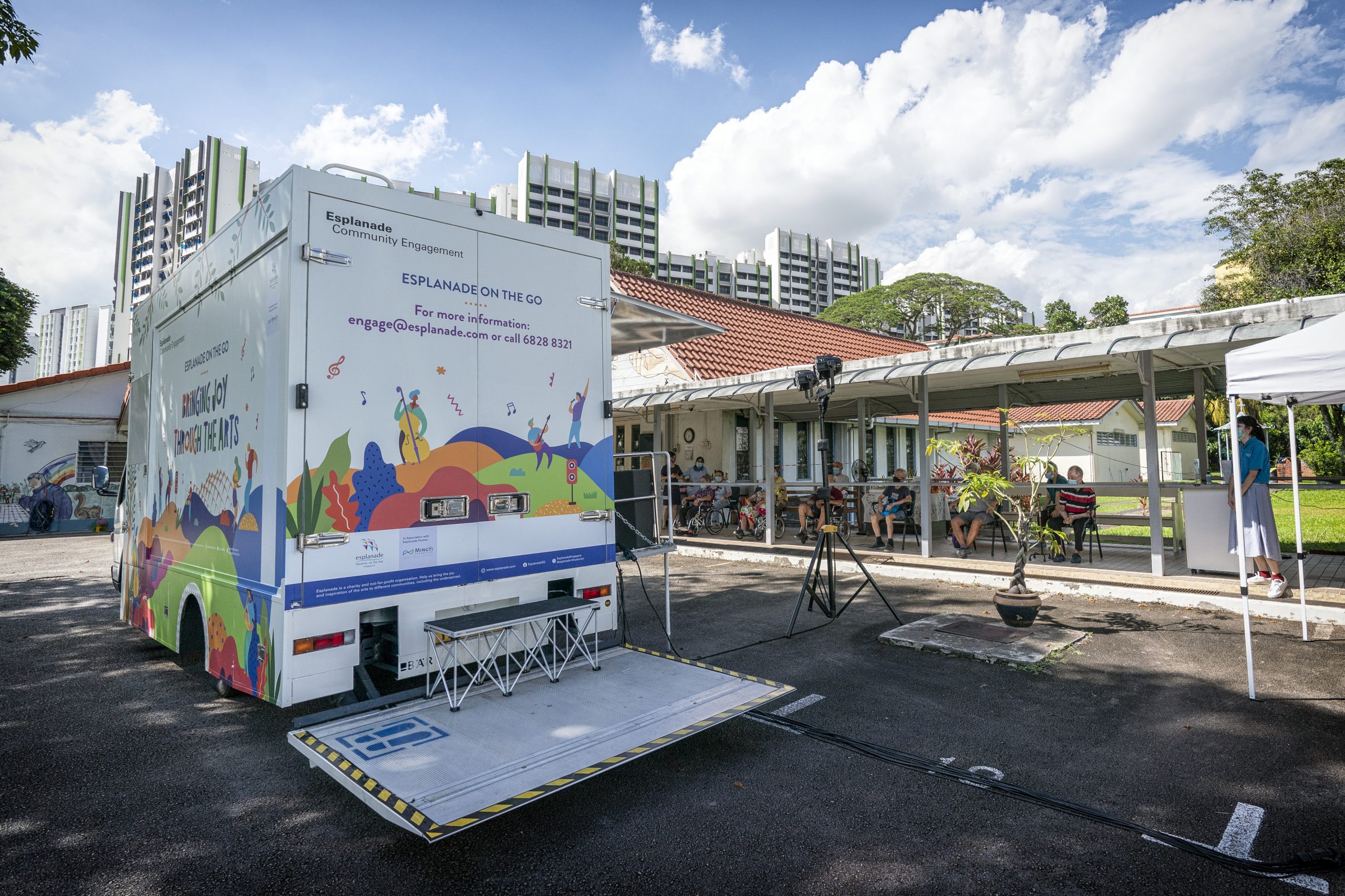 (Above) If they can’t go to the music, the music will come to them. It’s a parking lot party as Esplanade on the Go musicians put a smile on the faces of the elderly who wouldn’t otherwise be able to go to a concert.

As a charity with a social mission, Esplanade makes the arts available to those who can’t afford it, through free performances.

With SG Cares Giving Week taking place this week, donations made would be used to provide free performances and programmes like Esplanade on the Go. Find out more at Esplanade’s Arts for Change, or support their efforts here.

Esplanade on the Go is part of NVPC’s SG Cares Giving Week, taking place from December 1 to 7, 2020. Find out how you too can contribute to this week that celebrates the little acts of giving to make this “the best week ever”.

ESPLANADE ON THE GO CHEAT SHEET