Leading the 12-hour marathon countdown are its Weekend Warriors — guest DJs from among its user base — who co-host various top-10 categories that shaped music from the 1950s to the 1970s.

Along with the classics (Chuck Berry, Harry Belafonte, Perry Como, and many more), Richmond and company reminisce about the fashion icons, musicals and local acts of their era.

The app itself is designed to be a secure environment free of scams or phishing where seniors can explore digital tools — while being entertained.

The social enterprise is the brainchild of Richmond’s older son, Mark Richmond, 49, and Aloysius Tan, 53 — Generation X radio personalities. Currently, the former is Sport Singapore’s team lead of Team Singapore, while the latter runs Radioactive.sg, a company that specialises in streaming solutions for radio networks.

In addition to their day jobs, they run the app as an intergenerational crew of jocks, family and friends. Though largely volunteer-run at this stage, it seeks to grow its user base and eventually become self-sustaining.

Since its September launch, it has notched about 5,000 downloads, with users listening to its oldies while learning about digital trends through its content. 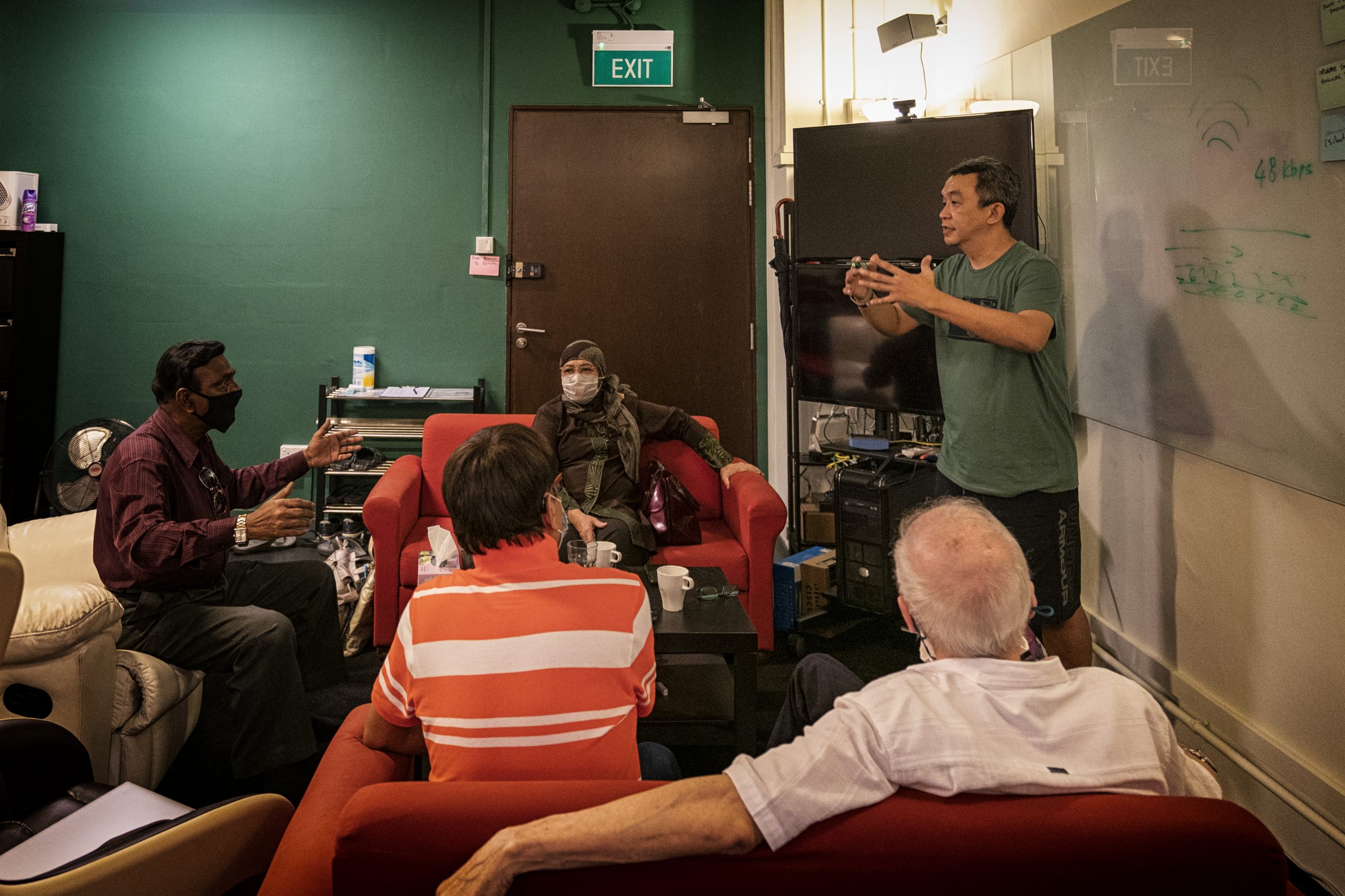 As the anchors of music programmes at VintageRadio.SG — Richmond, together with Guo Xianhua (Patrick), Rahimah Rahim and PN Bala — pre-record their shows in English, Chinese, Malay and Tamil.

Call them Singapore’s pioneer media influencers, whose voices recall halcyon days for many over 60, a generation who relied on radio in a way that under-20 audiences, who are sick with choice, never did.

How deep is their love
Brian Richmond once took a month’s break from Gold 905FM’s Sunday morning’s The Vintage Showcase to travel abroad with his wife.

When he returned, his boss asked if he could, please, not to do that again.

“Listeners had called in and complained, and were upset there were younger DJs on the air,” the 73-year-old explained, with a smile. “They’d tell them, ‘I don’t think you’re even old enough’; even though they were playing the exact same songs as I was.”

This year, seniors who lived alone or had been digitally disconnected were acutely affected by isolation. Music became the much-needed friend that helped sustain mental health.

“They bring back certain memories. That’s why people love these songs. People were doing the cha-cha during that time, and going for tea dances. We had a good time in those days.”
Brian Richmond, host, Vintage Radio SG

One superpower that the younger Richmond notes of his father is his ability to peg tunes to specific moments and places in Singapore’s history.

Indeed, the elder Richmond associates Brian Hyland’s “Itsy Bitsy Teenie Weenie Yellow Polka Dot Bikini” with the Katong area when he’s driving around, recalling specific details about an era, especially around 1955, ’56 and ’57, and into the 1960s.

“They bring back certain memories. That’s why people love these songs,” he said. “People were doing the cha-cha during that time, and going for tea dances. We had a good time in those days.” 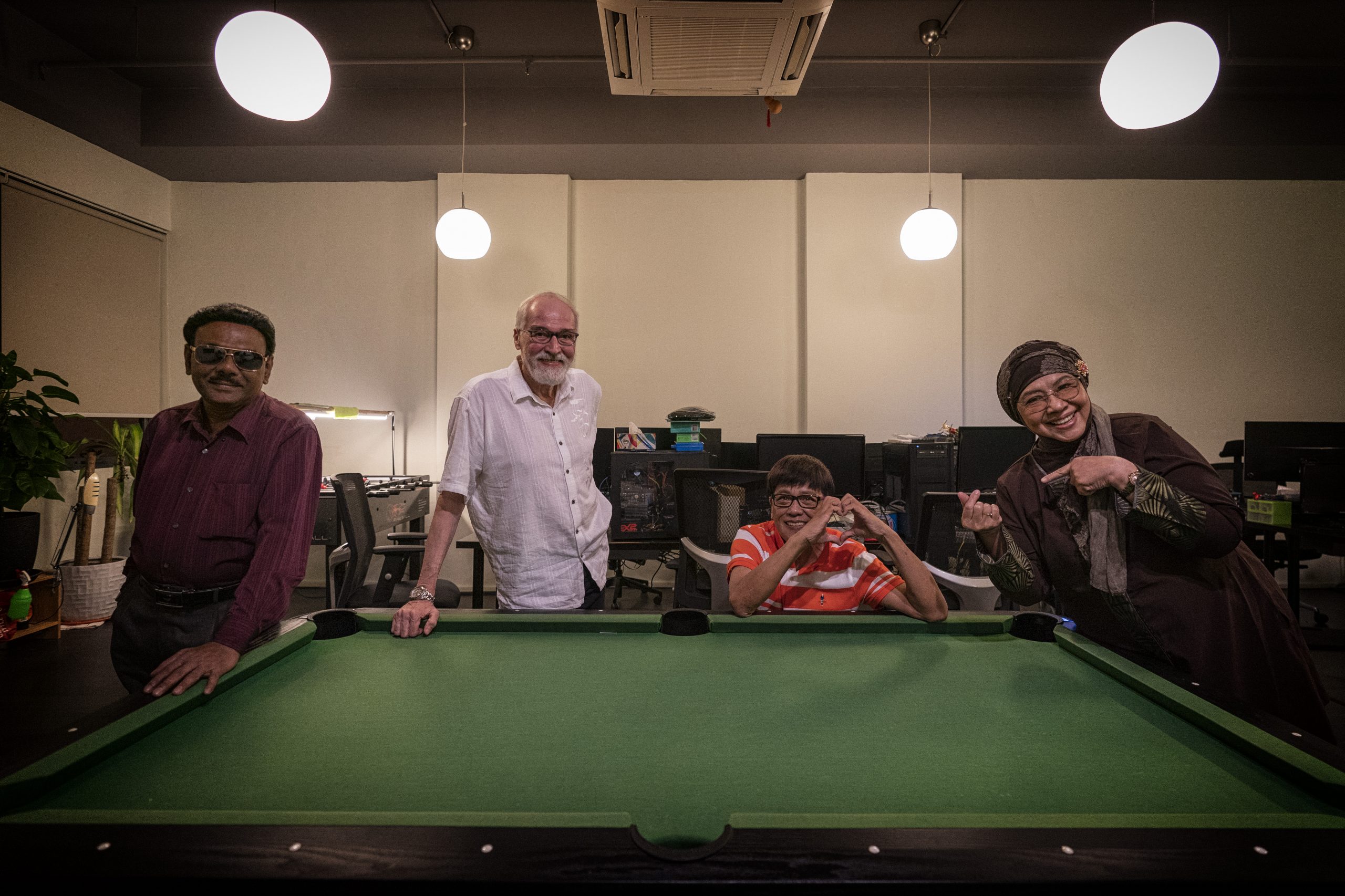 (Above) Pilots of the airwaves (from left to right): PN Bala, Brian Richmond, Guo Xinhua (Patrick) and Rahimah Rahim.

For retired singer Rahimah Rahim, the channel is a new way to do what she’s always done as an entertainer. “It used to be just singing my songs for the audience and entertaining them at my shows,” said the 64-year-old icon.

“But now, it is not only playing music for them but also having the chance to speak to them, to be their friend, keep them company and to bring some moments of joy and nostalgia into their lives. That is to me, rewarding enough. To be able to reach out and lift their spirits especially in these very stressful and trying times.”

Her style is personable. Though she speaks predominantly in Malay, she adds: “Sometimes I use a bit of English and mix it up a little because — come on lah — we are a multi-racial country and it’s not just Malay listeners listening to me!”

PN Bala gets enthusiastic fans. “Our listeners are really very excited as they are now able to listen to vintage songs, which were missed, forgotten and lost.”

The app’s on-going curation of these pieces of musical heritage makes it an ever- growing repository of oldies.

“More songs are being uploaded as and when we are able to source for the CDs, from vintage music lovers, like family, friends, relatives and well wishers,” he said. These songs then form playlists, which are regularly checked to avoid repetitions. “Inappropriate songs are deleted from the system’s library to make the listening pleasure of our listeners smooth and uninterrupted.” 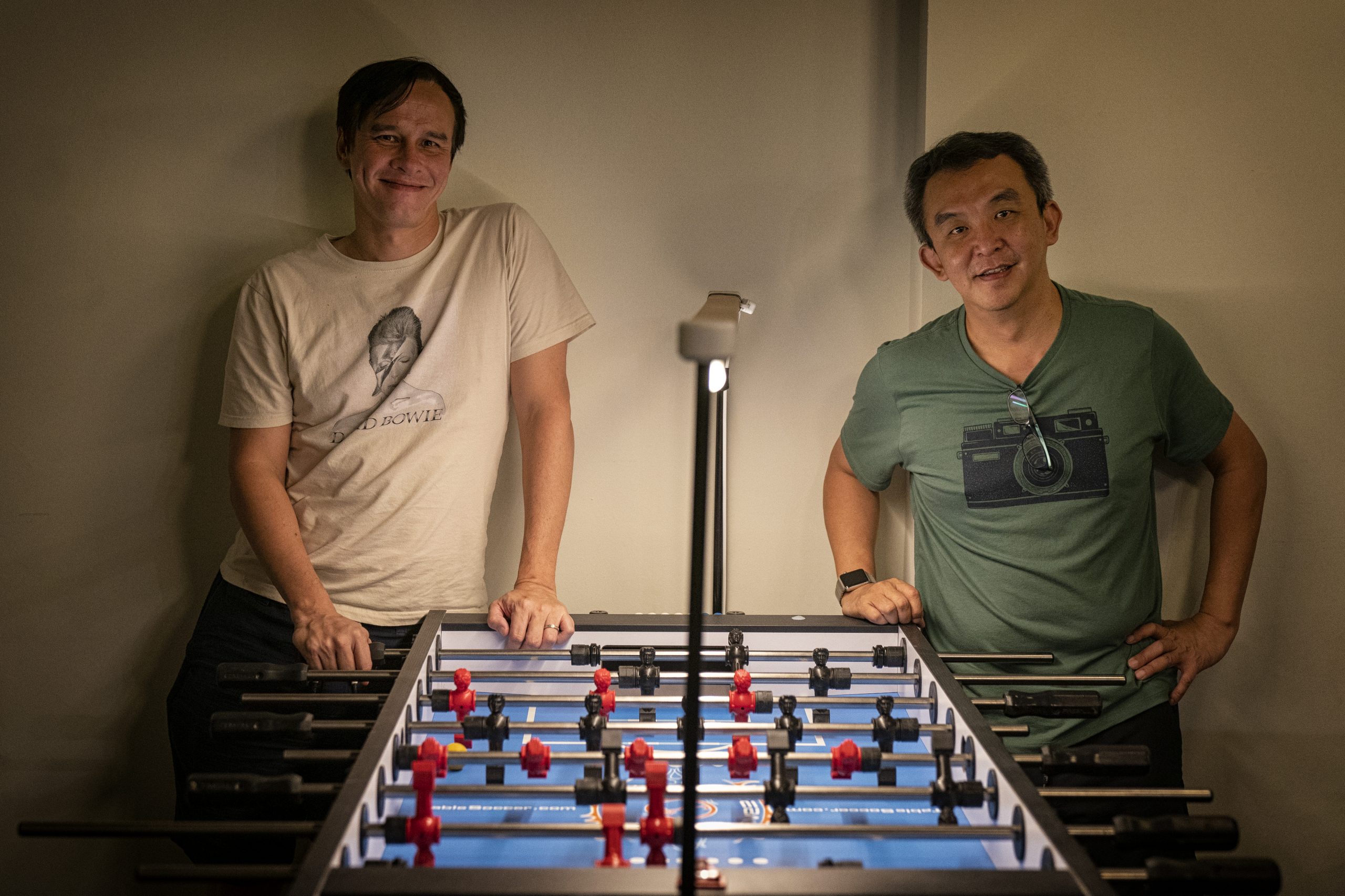 (Above) Gen X drivers of VintageRadio.sg, Mark Richmond and Aloysius Tan bumped into each other at the East Coast beach at the start of the Circuit Breaker, and took about a minute to decide on the idea, which they launched in September.


One thing Mandarin jock Guo Xinhua (Patrick) wishes he could do is to chat “live” on air with listeners, if only to reminisce. Listeners are very happy to hear dialect songs, especially from Cantonese artistes of the 50s and 60s, such as Zheng Junmian, Tan Bingwen, Xu Guanjie, Lu Hong and others.

“It’s my wish to be a DJ again,” he said. “I’m very happy that VintageRadioSG lets me be nostalgic, and with some elder listeners, recall the good times in the past.”

The architects of memory
It took a 30-second chance meeting between Mark and Aloysius to decide on the app. Much longer, and several rounds of adult training, to get the whole operation running smoothly.

At first, the silver four needed a lot of ad hoc remote guidance (“they are rapidly needing less of each day” said Tan), because they had to get used to the concept of remote access and voice tracking (pre-recording their talk-sets).

The app deviates from working in a studio with proper sound proofing, physical CDs or albums, and a big multi-channel control board and doing ‘live’ shows, so transition was needed.

Then there are face-to-face general classes, conducted at the Radioactive.sg office in Ubi. At one session, head coach Mr Tan starts on time. Everyone takes notes, says please and thank you; they are all ears — diligent.

Brian confesses: “I have to keep up with the technology. I keep missing steps. So I have to write it all down so I don’t miss any.”

Tan, however, described his learners as “brilliant! Enthusiastic!”, explaining: “With our operations, it’s very different. It’s about making sure that you have the right environment — not sounding like you are in the toilet — logging in via VPN and then pre-recording your show but still sounding ‘live’.

“So apart from the technology side of things, it is also visualisation, and their basic appreciation for their recording environment and techniques.”

But the end goal for everyone’s investment of time and effort, he said, was to broaden their reach. “We are now working hard on growing our listener base, and then bringing that to potential partners for commercial support.”


“We are now working hard on growing our listener base, and then bringing that to potential partners for commercial support.”
Aloysius Tan, co-founder, Vintage Radio SG

In fact, the app has a rapidly growing number of potential users as Singapore ages, and their mental health needs support.

The point was not lost on Mark Richmond, who, long before VintageRadio.sg, had randomly played Patsy Cline’s “Crazy” during a set at a home for the elderly during a volunteer session.

“Immediately a woman started talking about her daughter — no one knew she even had a daughter — and she’d sung that song to her daughter while she was pregnant.”

He observed “everyone’s got a soundtrack of their lives” — a playlist that fuels memories. “You play a certain song and you know this was when you had your heart broken. Or this was a song that was playing when you won a tournament,” he said.

Through VintageRadioSG’s music, he hopes to reconstruct memories for the elderly, whose stress can be compounded by constant changes in the environment.

“We are moving so fast as a country that we forget people will start feeling lonely because they don’t recognise anything around them anymore,” he said.

“We are not architects, we can’t build the same buildings. But we can bring them a song that resurrects their memories. We let them tell us the story of that building, although it is not there. That’s the least that we can do.”

Listen to Vintage Radio online or download the app from the App Store, Google Play or Huawei AppGallery. Music is streamed from 8am to midnight on weekdays. In addition to English: Mandarin/dialect, 4 to 8pm, Monday to Friday; Tamil, 8 to 10pm, Monday to Sunday; and Malay, 10pm to 12am, Monday to Sunday.