Tackling the topic of mental health awareness and ethical leadership were the partners of Beng Who Cooks, Mr Jason Chua and Mr Hung Zhen Long, and artistic director of Pangdemonium, Mrs Tracie Pang, who opened up about their response to 2020’s upheavals.

As panelists at the inaugural Momentum Tea webinar series, hosted by Temasek Foundation, the three guests opened up about channeling their resources towards a greater good — despite their own financial and personal challenges.

The inaugural episode, which took place on December 18 last year and moderated by WhatAreYouDoing.sg publisher Ms Serene Goh, was the first in a series that aims to bring to the fore voices of Singaporeans sharing solutions to larger problems confronting society.

2020 de-stigmatised mental health issues
Ms Jennifer Lewis, Head of Communications and Engagement at Temasek Foundation revealed that Momentum Tea was held in response to the immense public support for their many programmes this year.

Resources such as the Mental Health Toolkit for Employers by Tripartite Alliance Limited answered the need for a trusted resource, coaching employers on how to accommodate mental health as part of work cultures.

“Because we saw that the community was so ready, we knew that this was the right time for growth,” she said. “We need more voices, we need more advocates and people who care for the larger community.” 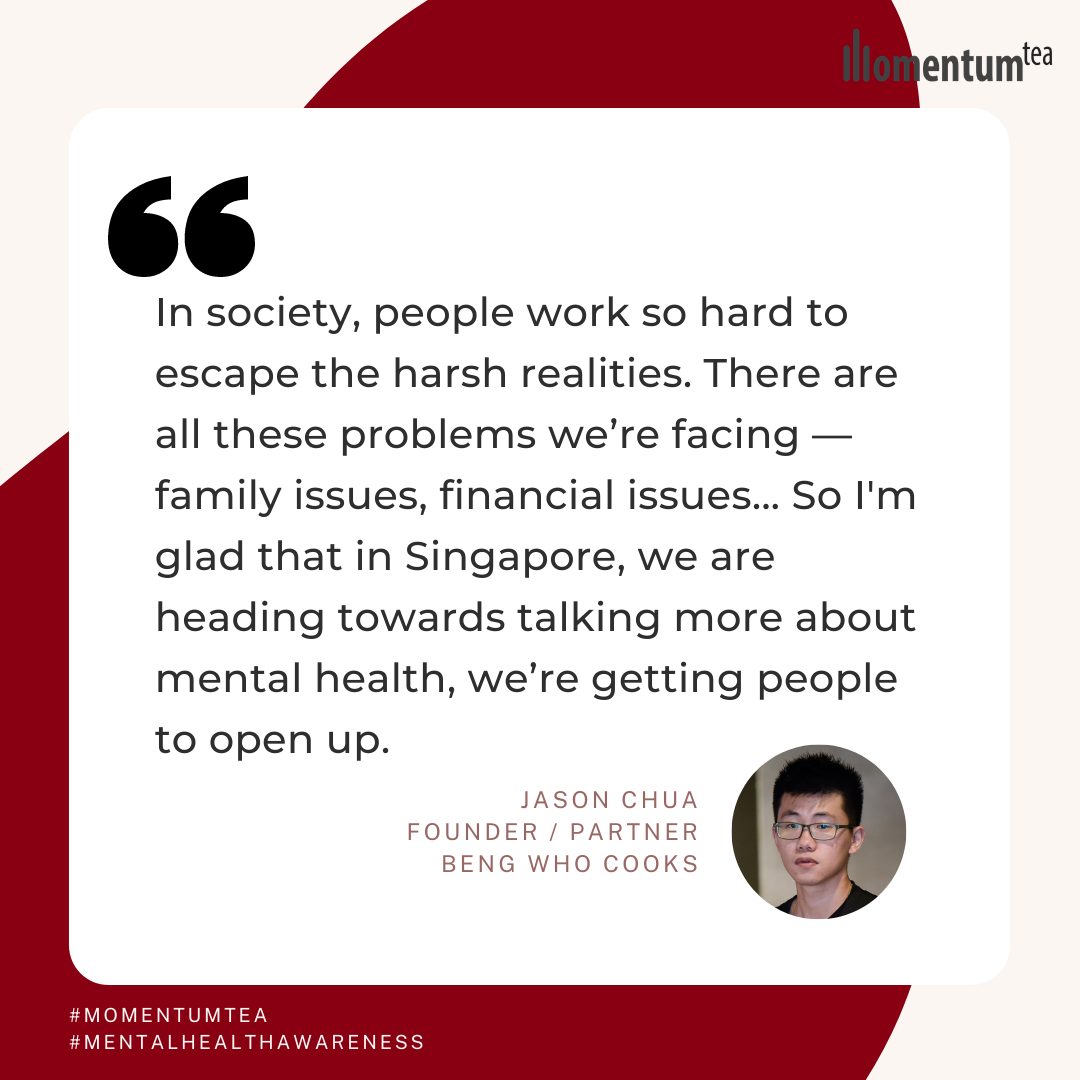 On the upside, 2020 also became a no-fault year, de-stigmatising issues such as depression and isolation, which became more openly discussed than ever.

Among Google’s top searches in 2020 was the question: “Why is mental health important?”

Lockdowns, social distancing, isolation and financial insecurity, as well as general uncertainties and lifestyle upheavals came with the Covid-19 pandemic, exacting its toll across the globe. The Ministry of Health reported a 60 per cent increase in calls to the IMH Mental Health Helpline from April to July 2020 — over Singapore’s Circuit Breaker and the first phase of reopening — compared to that same period in 2019.

Fielding questions about how they managed to maintain their personal welfare as well as that of their staff, panelists shared their practices, such as openly addressing mental health issues, as well as actively getting staff to talk about how they were really feeling.

Mr Chua and Mr Hung, whose Beng Who Cooks hawker stall delivered $15,000 of poke bowls free to needy families during the Circuit Breaker months, noted a shift in the perception of mental health in the past year.

“When we used to talk about mental wellness or mental illness, people would think that we’re being dramatic, or they can’t relate,” Mr Hung said. “During this pandemic these people actually felt it, and in this way people can relate more. It’s a change of culture, because in the past we’re more shy of telling people our problems.” 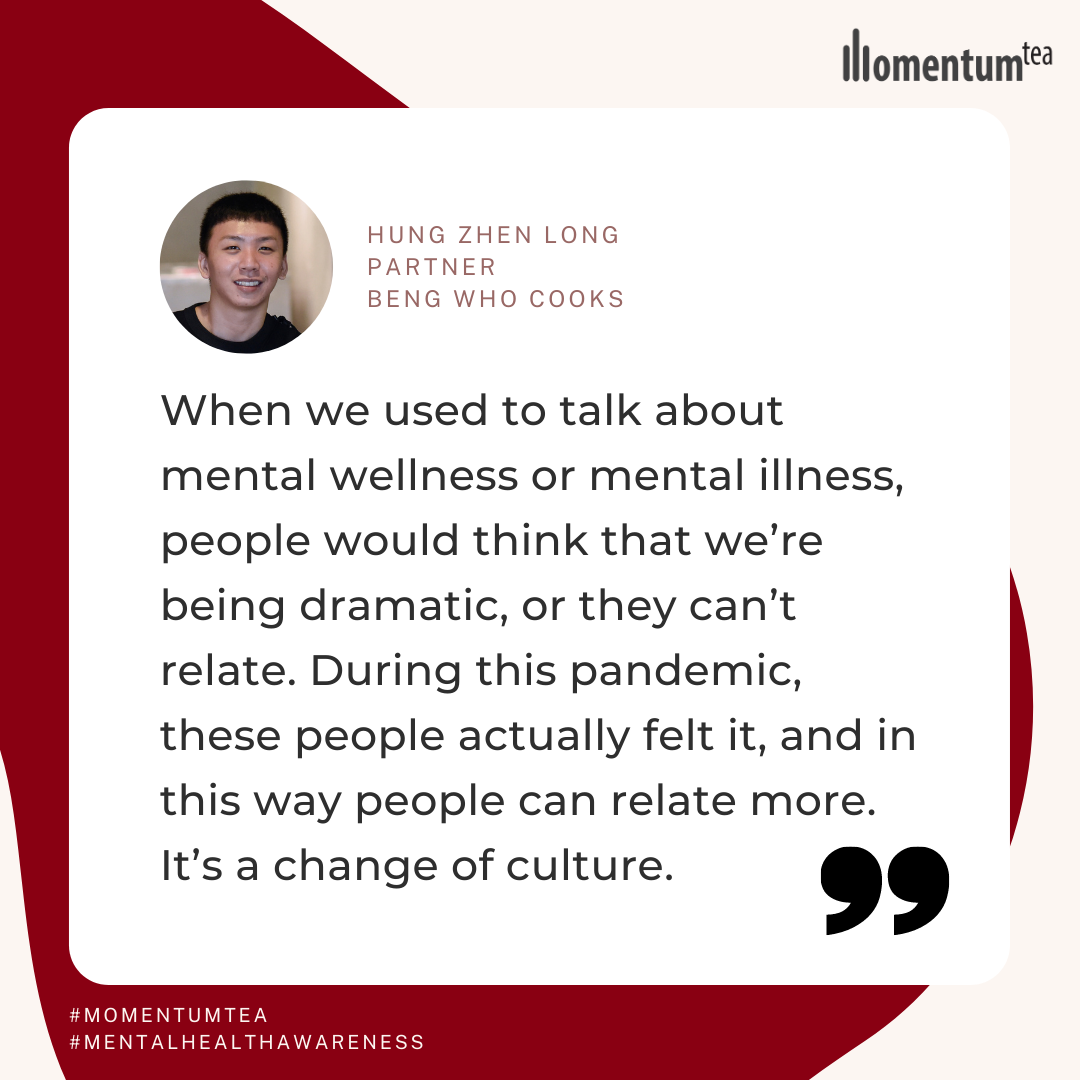 In the course of Pangdemonium’s 10-year history, Mrs Pang noted that mental health had always been an area of focus. Its production in February last year, The Son, delved into urgent mental health issues among youths.

“I think that in our industry (the arts), mental health has always been an issue that has dogged many people,” she observed. “Maybe that’s part and parcel of the type of person that comes into the industry as well. We carry our hearts on our sleeves so we’re very easily affected by our surroundings and the work that we do.”

At the height of the lockdown, the theatre company collaborated with CampusImpact to hold Theatre Thursdays, a programme that sought to help children open up about their feelings through speech and drama. (CampusImpact, a social service agency in Yishun that supports disadvantaged children and their families, seeks to provide a safe physical space for children to engage with nurturing adults.)

Commenting on the success of the programme, Mrs Pang said: “It gives the adults around them the ability to go ‘oh, that’s what’s happening’, because before that, if the children could not communicate what they were feeling, the adults would not know why they’re acting out.” 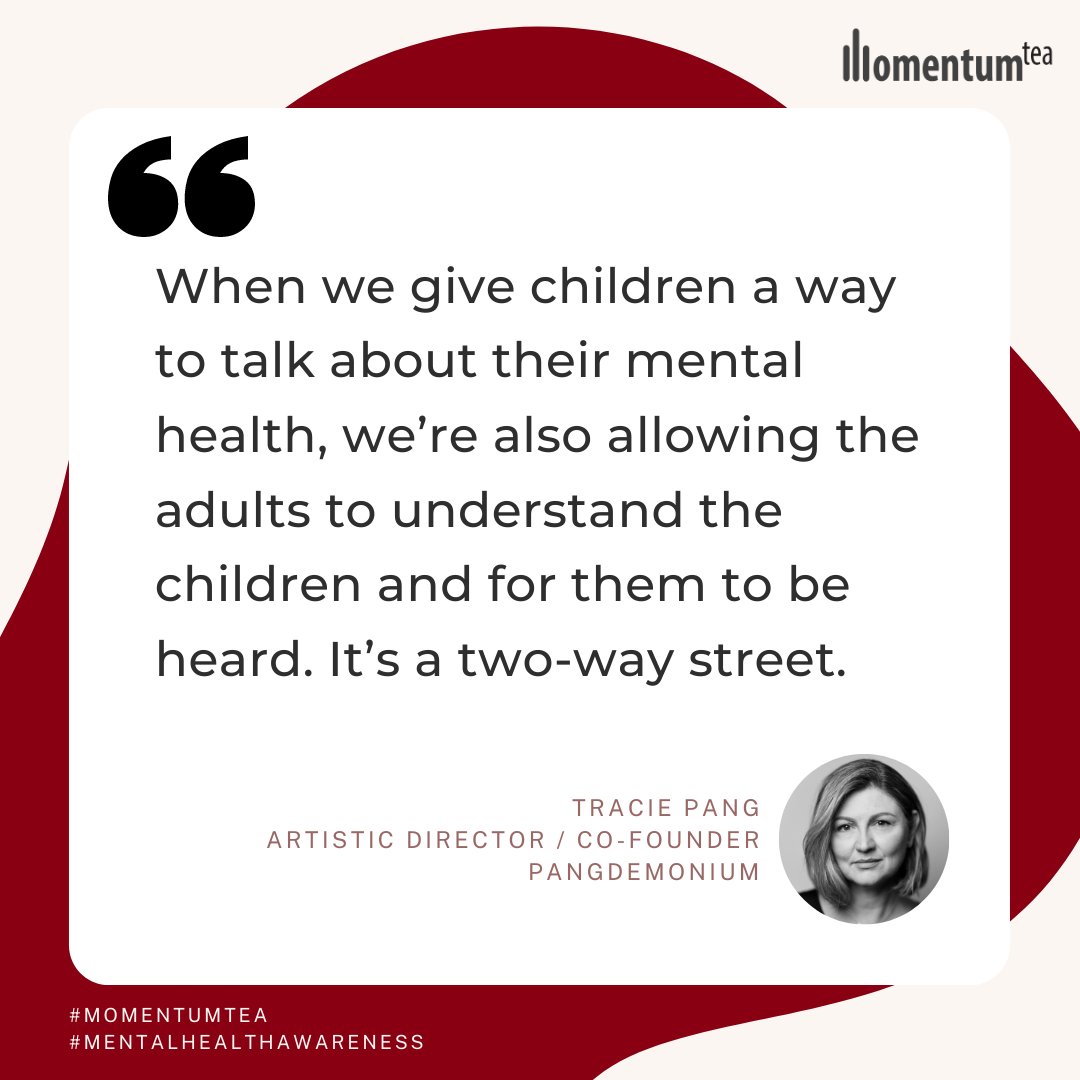 As the discussion continued, attendees raised points about managing staff welfare during the pandemic, and how the pandemic has taught them about resilience in the face of adversity.

While the Beng Who Cooks pair sheepishly admitted that they often choose to sweep their problems under the rug, Mr Chua noted the multiple resources that Singaporeans can tap into for a listening ear. “There are a lot of associations that are free, even 24 hours and you can just write to them, and they are just willing to hear you out,” he added.

Temasek Foundation supported the development of the My Mental Health portal, which offers free online support groups and training courses for employers and employees facing mental health difficulties during the course of the pandemic.

Ethical leaders walk their talk
As the conversation segued into issues surrounding ethical leadership, panelists addressed issues such as losing their direction and their responsibility to the communities that they serve, which can take root as a result of stressful situations or traumatic situations — such as the onset of a global pandemic.

In response to a question about panellists helping their own staff deal with their mental health, they stressed the need for open communication channels and adopting different means for the team to relieve stress together.

For Pangdemonium, the company paid to have a facilitator come in and run a dialogue with the whole staff. The session aimed to discuss how the team was feeling during the Covid-19 pandemic.

“It can’t just be about the money that you put into your back pocket — you have to care not only for the public but your staff as well,” she said.

Mr Chua and Mr Hung agreed, adding that employers should take the first step in providing a safe space for their employees to open up to them. The two cited that they often ‘play’ with their employees during the off peak hours to maintain staff welfare, talking to them and treating them to a good meal when possible.

“As a young company we can’t afford to bring them to the Zoo or for a staycation. Instead of trying to speak to them like a mother or a father would, we try to talk to them as friends, because friends are easier to talk to,” Mr Hung said.

Closing the session, Ms Lewis reminded the audience of the importance of taking the first step to deal with mental health struggles.

“There are times when you’re not ready to speak to someone yet, which is why the resources that we have online is a great starting point. If nothing else, it will help you find the courage, and what it takes to pull everything together to speak to someone else.”