Theirs was a marriage almost 40 years in the making.

Bus conductress Madam Chia Pee Kim, a widow, and bus driver Mr Tay Soo Hian met in 1983, and have been partners since.

In 2019, Mr Tay was diagnosed with cancer of the kidneys. It has since spread to the bone, and his health has been on a steady decline.

In all their years together, Mdm Chia, 84, has been his primary caregiver. When in November 2019, Mr Tay, 86, refused chemotherapy and initially rejected radiotherapy, his primary physician recommended palliative care from HCA Hospice Care (HCA).

After a few home visits from HCA, he agreed to attend Day Hospice three to four times a week, which he enjoyed.

“Uncle Tay has been a constant companion for my mother,” said Mr Ang Keng Heng, 59, Mdm Chia’s eldest son. “They lived like the people in that pioneer generation — frugally, and yet comfortable in their own ways.

“Last year, when he was unfortunately stricken with late-stage cancer, I followed him to all his medical appointments. I felt my mum wouldn’t be able to take him to medical appointments by themselves, because they don’t really understand medical terms, and I wanted to make sure that his medical conditions were properly expressed to doctors.” 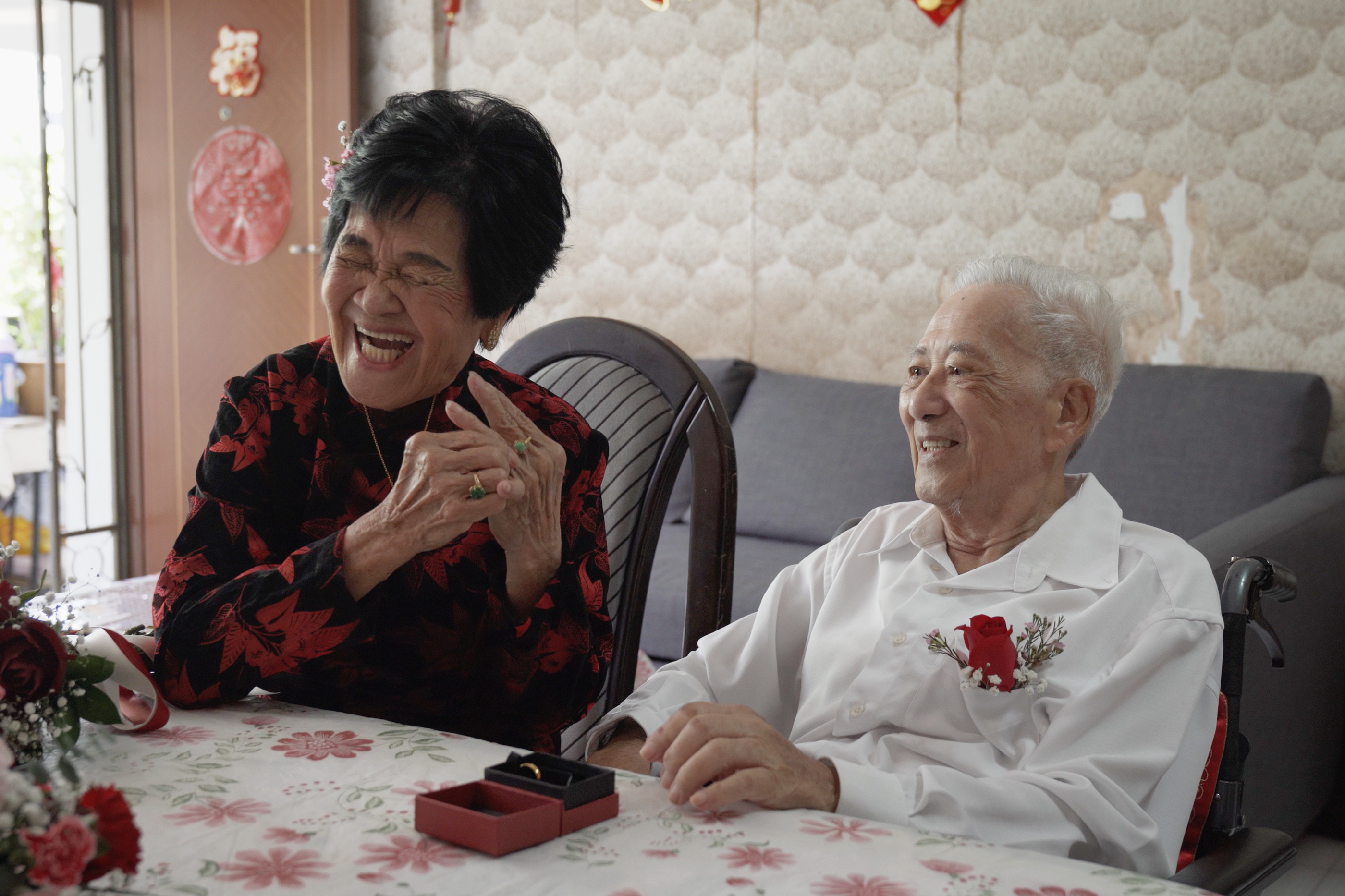 This year, things took a turn for the worse. Mr Tay was warded in hospital for six weeks because of a spell of uncontrollable vomiting. After his recovery, he chose to return home, to be cared for by Mdm Chia.

In July, he brought up the subject of marriage. “He asked my son about us getting registered for marriage,” said Mdm Chia in a mix of Mandarin and Hokkien.

With a dire prognosis of just a few months to live, it was a race to arrange the wedding.

Wedding Planning for the Elderly Couple Took Days and Nights of Coordination
Through a project called “A Good Day”, HCA plans an occasion or activity for their patients and offers “photo documentary that captures beautiful moments of patients of enjoying a good day — whatever their personal definition may be,” said Ms Amanda Chua, 29, volunteer management and engagement executive at HCA.

On top of their Home Hospice and Day Hospice services, the charity helps patients fulfill their last wishes, from simple wishes like making traditional red tortoise cake — ang ku kueh — to going on a date with their partner.

“[Volunteers] were all very excited, very happy and all surprised that they could be involved with the marriage of an old couple — during Covid and in such a special setting because my uncle is very, very sick.”
Mr Ang Keng Heng, eldest son of Mdm Chia Pee Kim

When Mr Ang broached the subject of registering at the Registry of Marriages (ROM) as part of Mr Tay’s bucket list, HCA stepped in without hesitation to offer support for their patient.

“The process was arduous,” Ms Chua added. “Adeline Tan (the social work associate attending to Mr Tay) and Keng Heng coordinated day and night for the occasion to happen.”

“When my son told me it would take two weeks to plan, I said, ‘no, that’s too difficult’,” said Mdm Chia. “If it’s too much trouble, I don’t want it.”

With Mr Tay wheelchair-bound and in constant pain because of the cancer, it would’ve been too difficult to have the wedding at the ROM. 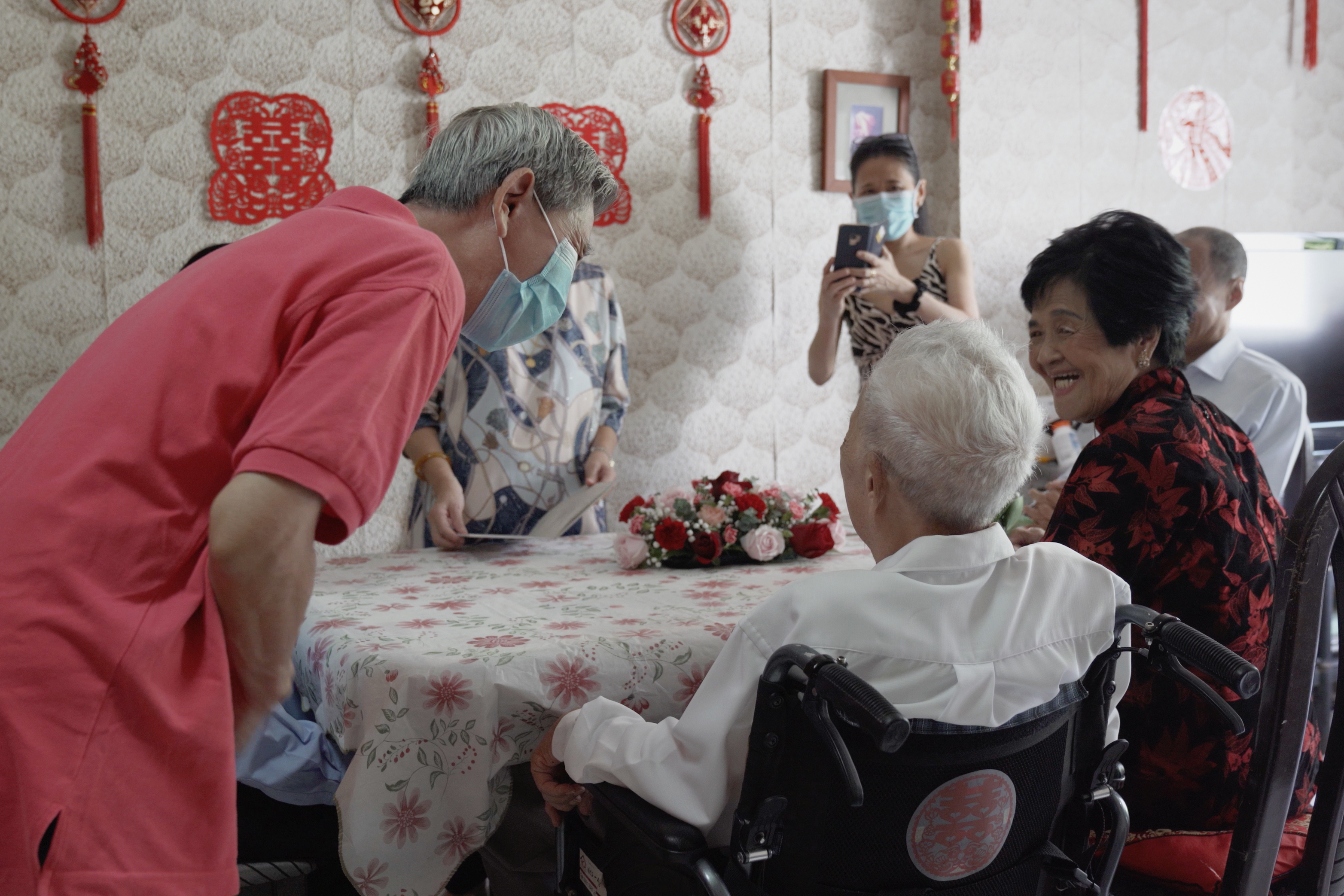 (Above) Due to Covid-19 restrictions, the wedding ceremony was an intimate affair held at the couple’s flat in Tampines.

However, Ms Tan, 35, together with her team, rushed to round up a group of volunteers who would be able to arrange and support a wedding ceremony — from the solemniser to the wedding planner.

“Everything came together in about three weeks — which was daunting!” said Ms Rachel Henderson Shaw, 32, the volunteer wedding planner that HCA engaged, who specialises in intimate weddings and elopements.

“All the suppliers we engaged (from food to decorations) were incredible, which made it run so smoothly. The main thing was the uncertainty of whether we could get the solemniser booked for the right day — and my constant fear that the date would change at the last minute due to Covid-19 restrictions!”

Banding Together to Fulfill His Last Wishes
“We had a good start with Adeline, and the additional support from volunteers who had relationships with HCA,” said Mr Ang. “They were all very excited, very happy and all surprised that they could be involved with the marriage of an old couple — during Covid and in such a special setting because my uncle is very, very sick.”

The ceremony was held at the couple’s flat in Tampines and kept short to prevent Mr Tay from sitting up in pain for too long.

His pain, however, did not deter him from enjoying the occasion. During the ceremony, which was kept small due to Covid-19 restrictions, both Mr and Mrs Tay were grinning from ear to ear as they said their “I dos”, and laughed while putting on their rings.

“I am really happy and proud [to have been involved]. It was so nice to see the huge smile on the bride’s face all day. You could just feel her excitement. I felt lucky to have been able to give her a nice day and some lovely memories with her husband.”
Ms Rachel Henderson Shaw, wedding planner

“The ceremony was a success because of the help given by HCA, the volunteers involved, as well as everyone else who’s helped behind the scenes,” said Mr Ang. “I would encourage anyone with time or money to contribute to charitable organisations like HCA.” 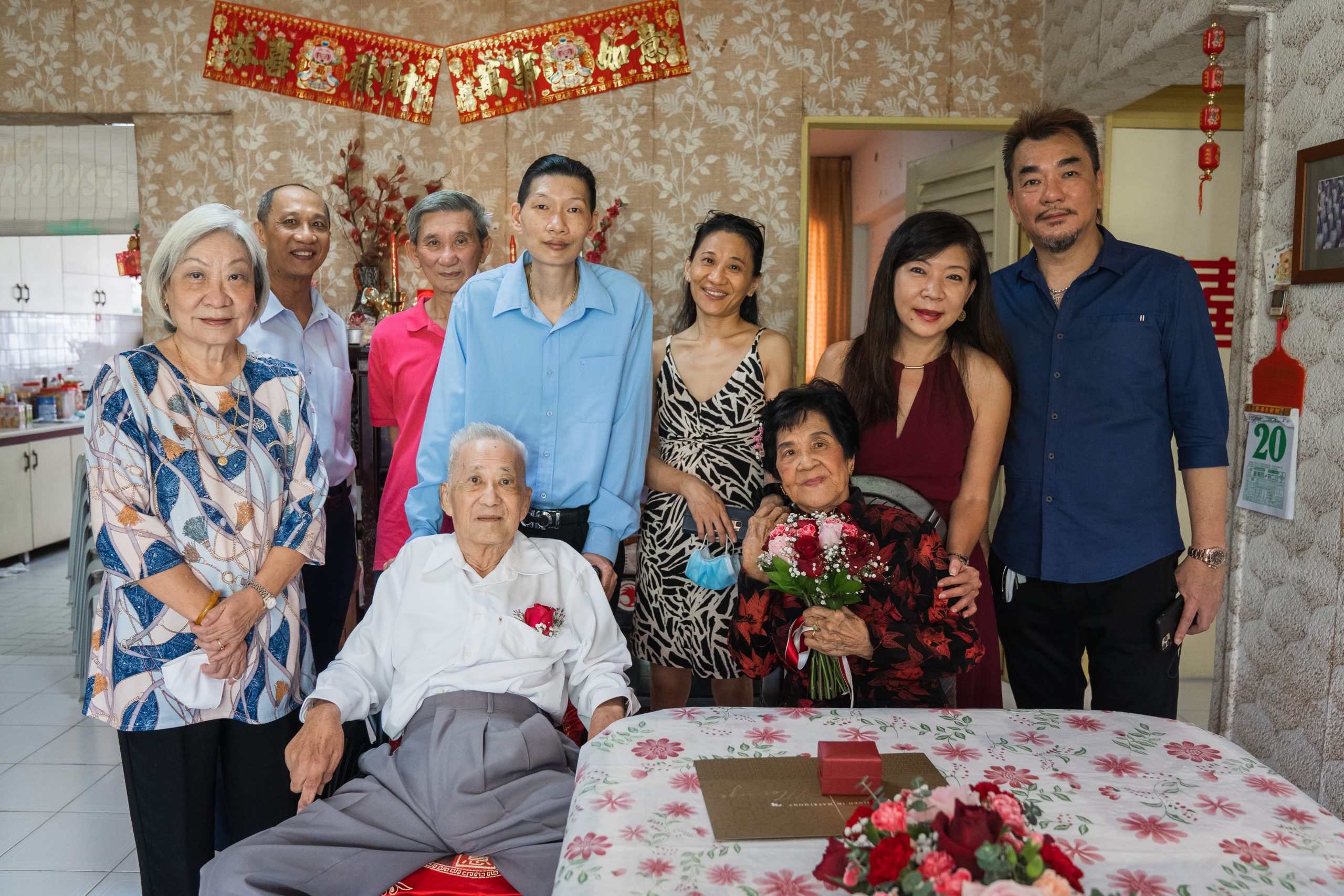 (Above) The ceremony was attended by family and close friends.

Due to the headcount restrictions, Ms Henderson Shaw was unable to watch the ceremony she planned in person. She left the flat to make room for guests, and returned only once guests left. However, the joy of the occasion was not lost on her.

“I am really happy and proud [to have been involved]. It was so nice to see the huge smile on the bride’s face all day. You could just feel her excitement. I felt lucky to have been able to give her a nice day and some lovely memories with her husband.”

The occasion is bittersweet, as the new Mrs Tay (nee Chia), will likely soon be widowed again.

Mr Tay is currently staying at the palliative ward of St Andrews Community Hospital, where she visits him daily from noon to 9pm. Their story of devotion reminds us to treasure the finite time we have with our loved ones, despite the struggles of this pandemic.

WhatAreYouDoing.sg was part of the team of volunteers engaged to document the happy occasion for Mr and Mrs Tay.