What Are You Doing SG?
Home Stories Features Keeping Bellies Full One Bun at a Time
Share
Facebook
Email

(Photo above) Volunteers distribute loaves of bread and buns to residents in Toa Payoh. Regular volunteers are familiar with the beneficiaries’ preferences and even remember the type of buns they like.

One of The Giving Collective’s volunteers, Ms Cath Sng, 44, did just that. She partnered with Ghim Moh’s “Uncle Di” — a man in his 70s with all the intel on the estate — to distribute unsold bakery products to residents in need.

The pair’s efforts in Ghim Moh fall under The Giving Collective’s weekly programme which activates volunteers to redistribute excess perishable goods from shops in their neighbourhoods to stave off hunger within the community. The Collective was set up in August by pharmacist Ms Anne Neo, 25, and has since attracted 40 active, eager and passionate volunteers.

Ms Sng who is new to the Ghim Moh neighbourhood — having just moved in in August — said Uncle Di was indispensable in getting the ball rolling. “I know what it’s like to not have money to even buy a single piece of bread and live off boiled barley so I wanted to get the initiative up and running in the neighbourhood as soon as possible. When we first moved in, Uncle Di told us about the vouchers we were eligible for and other food-related ‘lobangs’ (good deals). I found out that he also has deep knowledge of residents’ needs, right down to the size of their families so he was the perfect partner.” 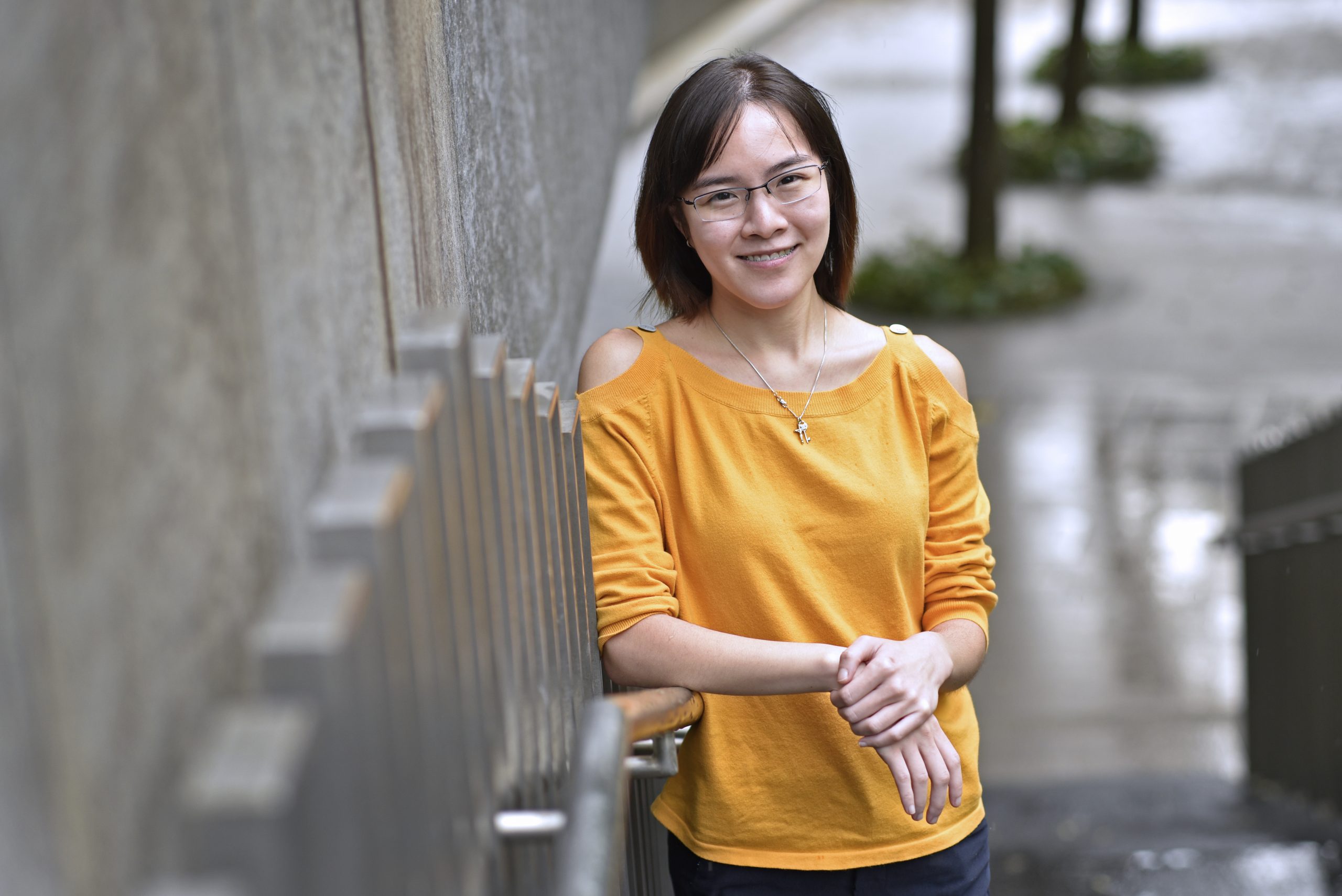 (Above) Anne Neo is the founder of The Giving Collective which redistributes food like bread, buns and pastries to the community.

In late October, the duo, accompanied by Ms Sng’s sons aged 7 and 9, went door-to-door at Ghim Moh’s Block 16 for their first-ever distribution run. Now, both Ms Sng, who is also a volunteer palliative caregiver, and Uncle Di, 73, a former occupation surveyor whose real name is Mr Ko Ah Sait, spend their Tuesday evenings running a baked goods collection point at the void decks of either Block 16 or 17. Grateful recipients make it a point to get there on time.

Founder Ms Neo said organically formed community bonds and connections, as in the case of Ms Sng and Uncle Di, have been one of the many unexpected and meaningful outcomes of The Giving Collective’s efforts.

“For some, these buns could serve as an entire meal. Cooking requires extra expenses for gas, oil, rice and other rations, as well as energy which some of our older beneficiaries might not have.”
Ms Anne Neo, founder, The Giving Collective


Ms Neo said, “Cath herself is financially challenged but with Uncle Di’s help, she is able to pay it forward and keep bellies full in her neighbourhood. I’m very proud of them.”

The Ghim Moh collection point is one of 11 rolled out by The Giving Collective over the last four months — an impressive feat considering its relative newness to the scene. It is also a testament to Singaporeans’ desire to help fellow citizens, said Ms Neo. The other collection points are located at places such as Serangoon Central, Chinatown and Yishun.

Ms Neo said recipients treat these surplus breads and buns as more than just snacks. “For some, these buns could serve as an entire meal. Cooking requires extra expenses for gas, oil, rice and other rations, as well as energy which some of our older beneficiaries might not have. Many a time, they would rather just eat bread as a filling and relatively healthy quick fix. So we are here to address this need.” 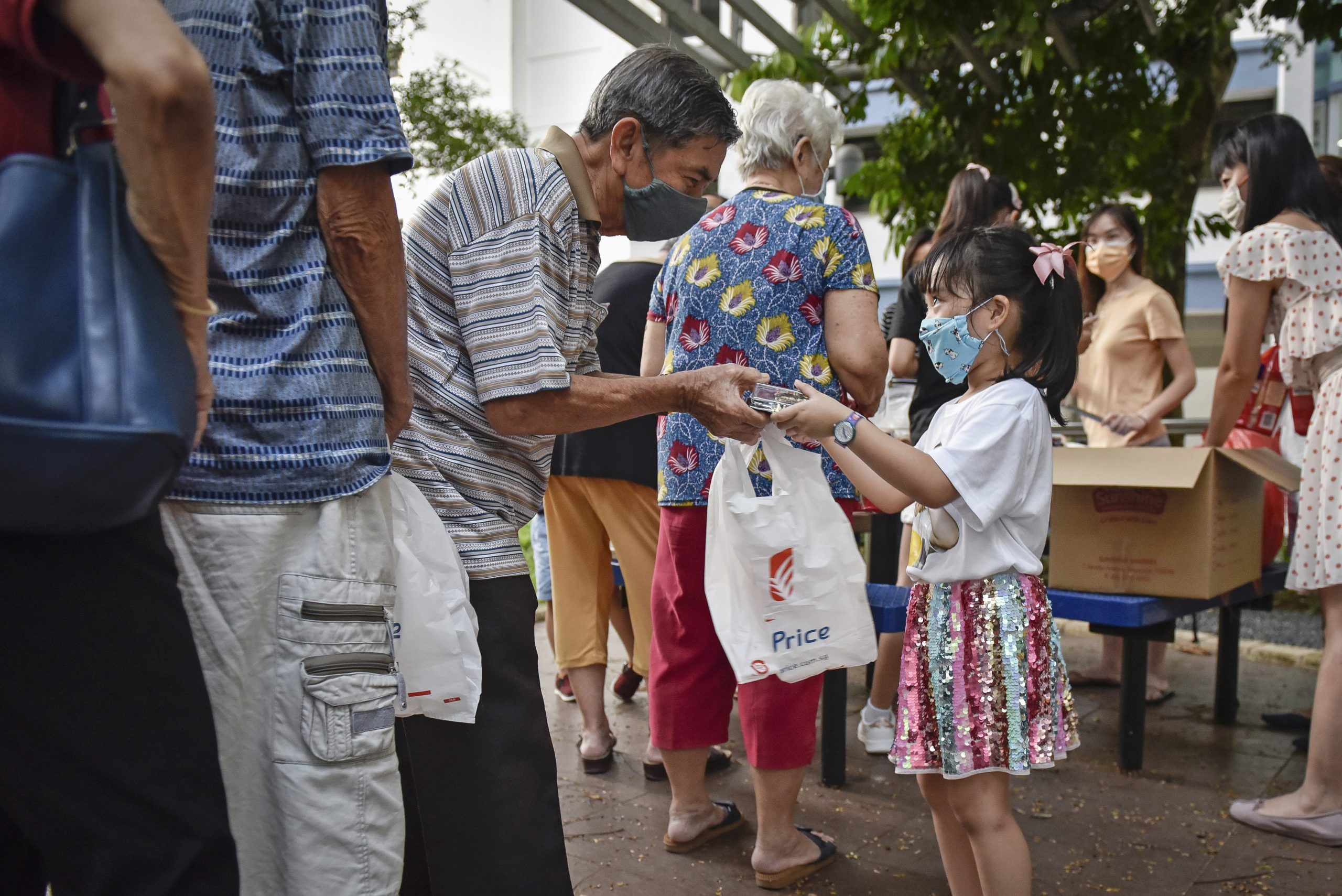 (Above) Five-year-old, Anya Ng, accompanied by her sister and mother, helps distribute food to the beneficiaries. The family learnt about the cause and decided to donate some doughnuts. It was their first time participating in a distribution.

Starting a new collective
The Giving Collective can trace its beginnings to a solo initiative spearheaded by Ms Neo in the first quarter of 2019.

Every Friday evening, Ms Neo would pick up leftover bread, buns and pastries from a bakery near her workplace in Novena. She would then wake up early on Saturday mornings and rush over to her neighbourhood’s senior Care Corner at Block 149 Toa Payoh to distribute the baked goods for breakfast. The elderly, she said, were very happy to receive the assortment of treats which included sausage buns and red bean buns. They usually washed down the buns with a mug of coffee or milo.

This personal initiative of hers hit a bump in the road during the Circuit Breaker period when the Care Corner closed to reduce mingling among its beneficiaries. Striving to keep the momentum going, Ms Neo shared about her initiative online on platforms such as Carousell and Telegram. Over the course of a couple of weeks, she went around Singapore making deliveries, meeting people at MRT station gantries and the like. This was not entirely sustainable, she said.

When the number of Covid-19 cases in Singapore stabilised and restrictions eased up, Ms Neo was relieved to be able to restart her bun distribution efforts in Toa Payoh. At one such session in August, she was approached by student Ms Daphne Lim, 20, who had heard of her initiative and wanted to do the same for her neighbourhood in Tampines.

Under Ms Neo’s guidance, Ms Lim set up the Collective’s second distribution point. Along the way Ms Lim started sourcing for her own breads by approaching bakers on Instagram to donate their unsold products.

As word got around, via news blasts within the senior care sector and other publicity initiatives by Ms Neo, more volunteers came forward. This led to more satellite collection points springing up across neighbourhoods islandwide.

Between 60 to 100 pieces of baked goods are distributed per location. 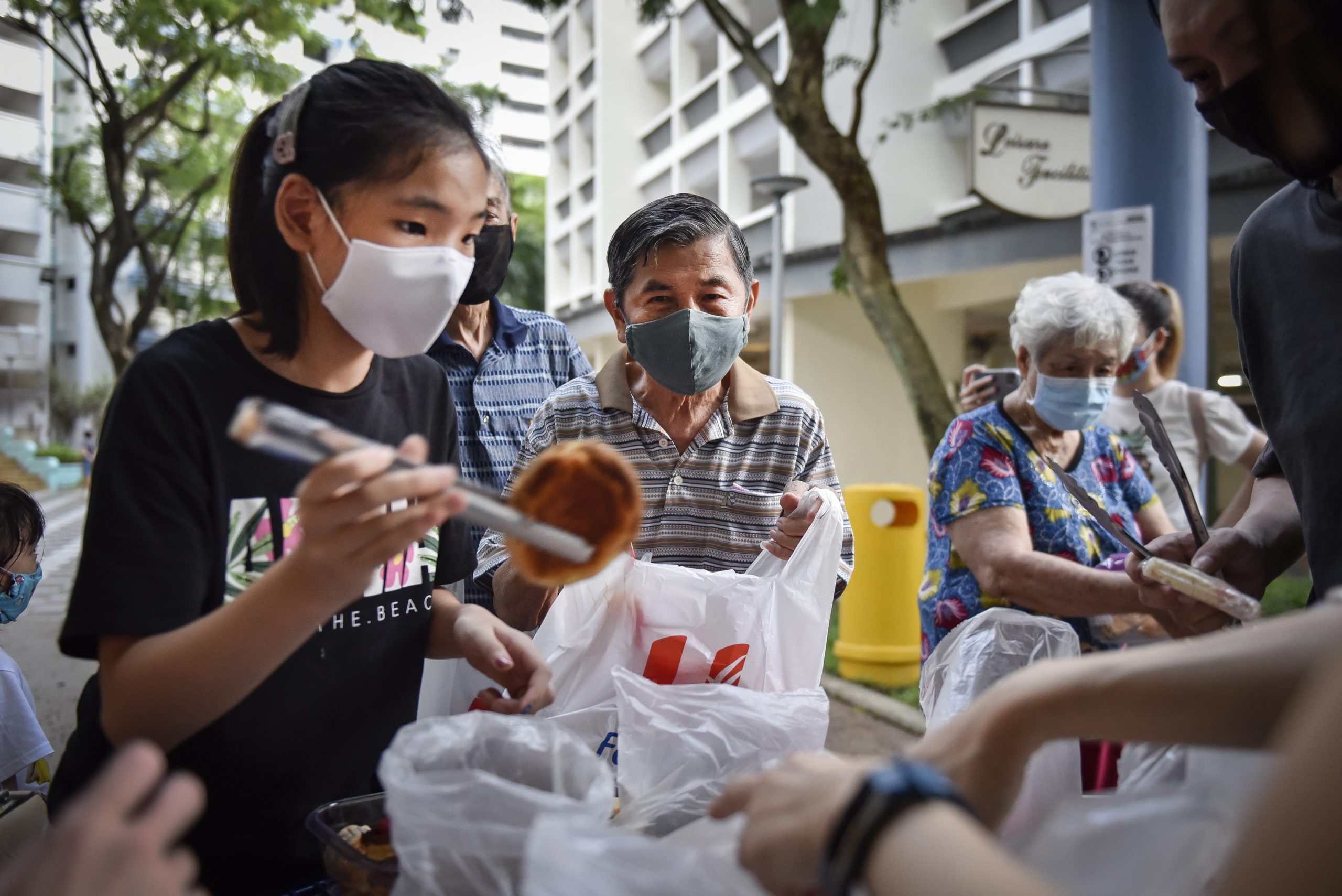 (Above) Beneficiaries get to choose up to six buns each time there is a distribution. The Giving Collective is not particular about the income background of each beneficiary. If they are willing to queue, they will be entitled to some buns. After all, this food would otherwise be thrown away.

Ms Neo said she never turns people away. “If they have made the effort to come down and queue up for bread, we give them away — capping it at six items per person. We don’t do means-testing as these things have a way of sorting itself out. Those who are really in need start queuing early and become our regulars.”

On top of her busy schedule coordinating The Giving Collective and managing a full-time job, Ms Neo still makes it a point to do individual deliveries for Singaporeans struggling to put food on the table. For instance, some Fridays, at 9pm or so, she meets a beneficiary at Toa Payoh MRT station to pass him a small bag of buns.

She said, “This beneficiary’s dad had a stroke and his two younger siblings are still studying. He often works overtime as a sales promoter and has multiple part-time jobs. Even if I only have a few buns or chiffon cake slices for him, he is ever so grateful to be on the receiving end of kindness. He saves the food for his parents and siblings and rarely takes any for himself.”

“When people write back to say this was my dinner, or I had the buns for breakfast and lunch, I’m reminded that simple gestures like these can make all the difference.”

“I am very much aware that there are many organisations out there which distribute in much larger quantities than we do and sometimes this makes me feel a bit small,” she reflected.

“But when people write back to say this was my dinner, or I had the buns for breakfast and lunch, I’m reminded that simple gestures like these can make all the difference.”

The Giving Collective is part of NVPC’s SG Cares Giving Week, which kicks off today, from December 1 to 7 2020. Find out how you too can contribute to this week that celebrates the little acts of giving to make this “the best week ever”.