What Are You Doing SG?
Home Stories ‘Inside Singapore Airlines’ Takes Flight and Gives Back
Share
Facebook
Email

(Photo above)  In the cabin crew experience, flight stewardess Ms Guo Shanling guides participants from Northlight School as they learn the basics of inflight service in the mockup cabins of a Singapore Airlines Airbus A380.

Nine-year-old Wareesha, who hasn’t been on a plane in ages, made a beeline for inflight entertainment, quickly settling into her seat aboard a mock Airbus A380. Her mother, Mdm Sue Sidik, 44, said: “The first thing she said when we saw the (airplane) mockup was ‘TV!’ She even buckled herself up because we could sit. It’s been some time since we travelled… every time we travelled, she [liked] to watch the TV.”

Wareesha was among 40 children from the Down Syndrome Association (DSA), who over two hours, embarked on a junior pilot experience during the December holiday season last year, sponsored by Temasek’s T-Touch.

“They don’t usually organise for this kind of tour in this training centre,” said Ms Mahli Wong, 55, another parent with the DSA. “It’s a once in a lifetime experience.” 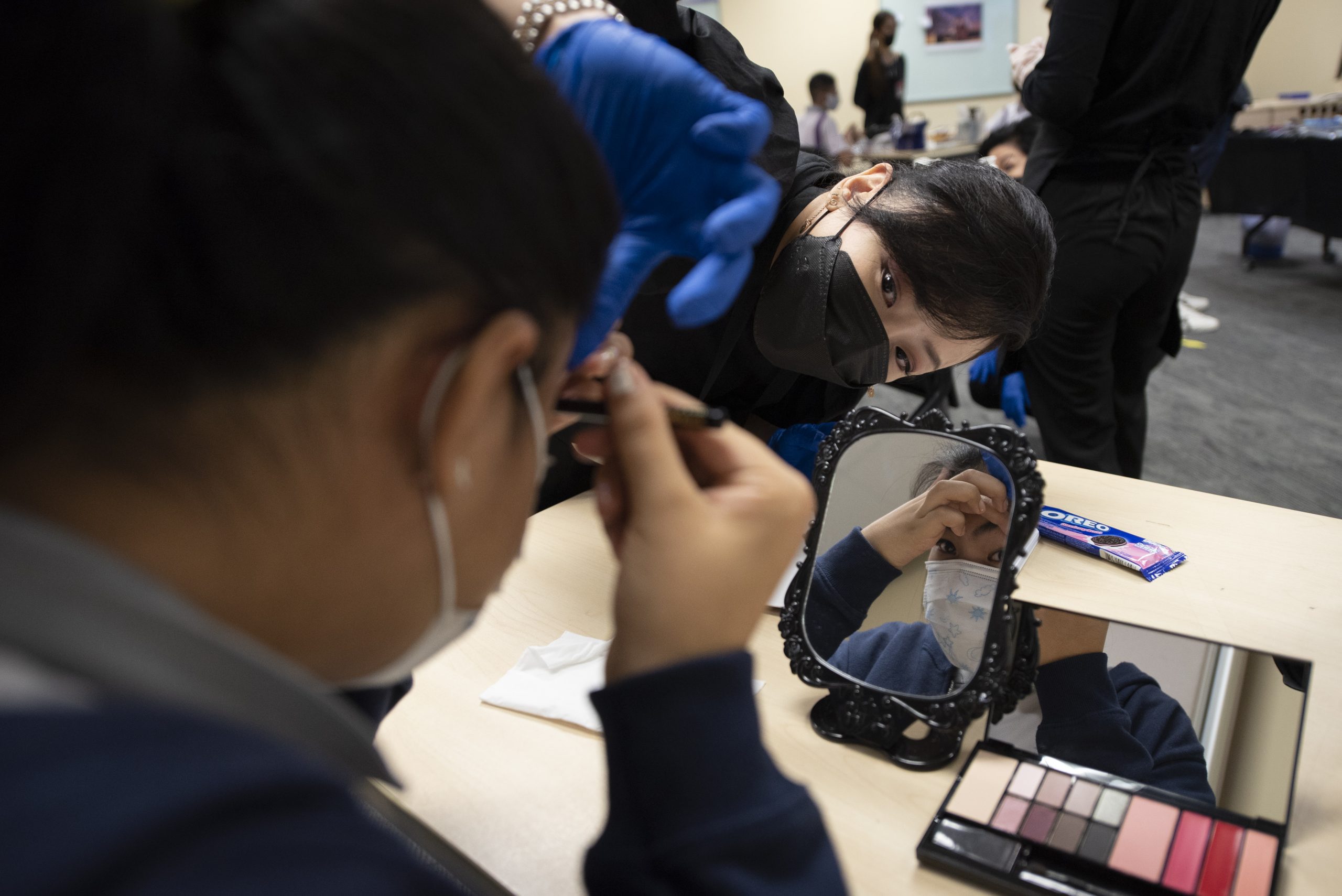 (Above) Chief stewardess, Ms Charlotte Yen teaches a participant how to apply make-up the SIA way.

In fact, the last time the centre was open to the public was five years ago, in 2015, as part of the SG50 celebrations. Now, it’s a pandemic that has reopened its doors. The 2,000 tickets for Inside Singapore Airlines — a public tour — were sold out in under nine hours.

The beleaguered aviation industry took a walloping from Covid-19, and SIA itself had to make significant cuts to its flight capacity, along with 4,300 of staff positions across the SIA Group.

“With the Covid-19 pandemic drastically reducing the number of flights operated by the SIA Group, we created unique activities that would allow us to engage with our fans and customers during this time,” said Ms Betty Wong, the airline’s divisional vice president of Inflight Services and Design.

Activities such as hosting 400 visitors from charity organisations such as DSA, Northlight School, Beautiful People, ISCOS and Project Chulia Street. Ms Wong added, “We are excited to have hosted more than 400 participants from various charities at the event, who were able to gain an insider look at what it’s like to be part of the Singapore Airlines family.” 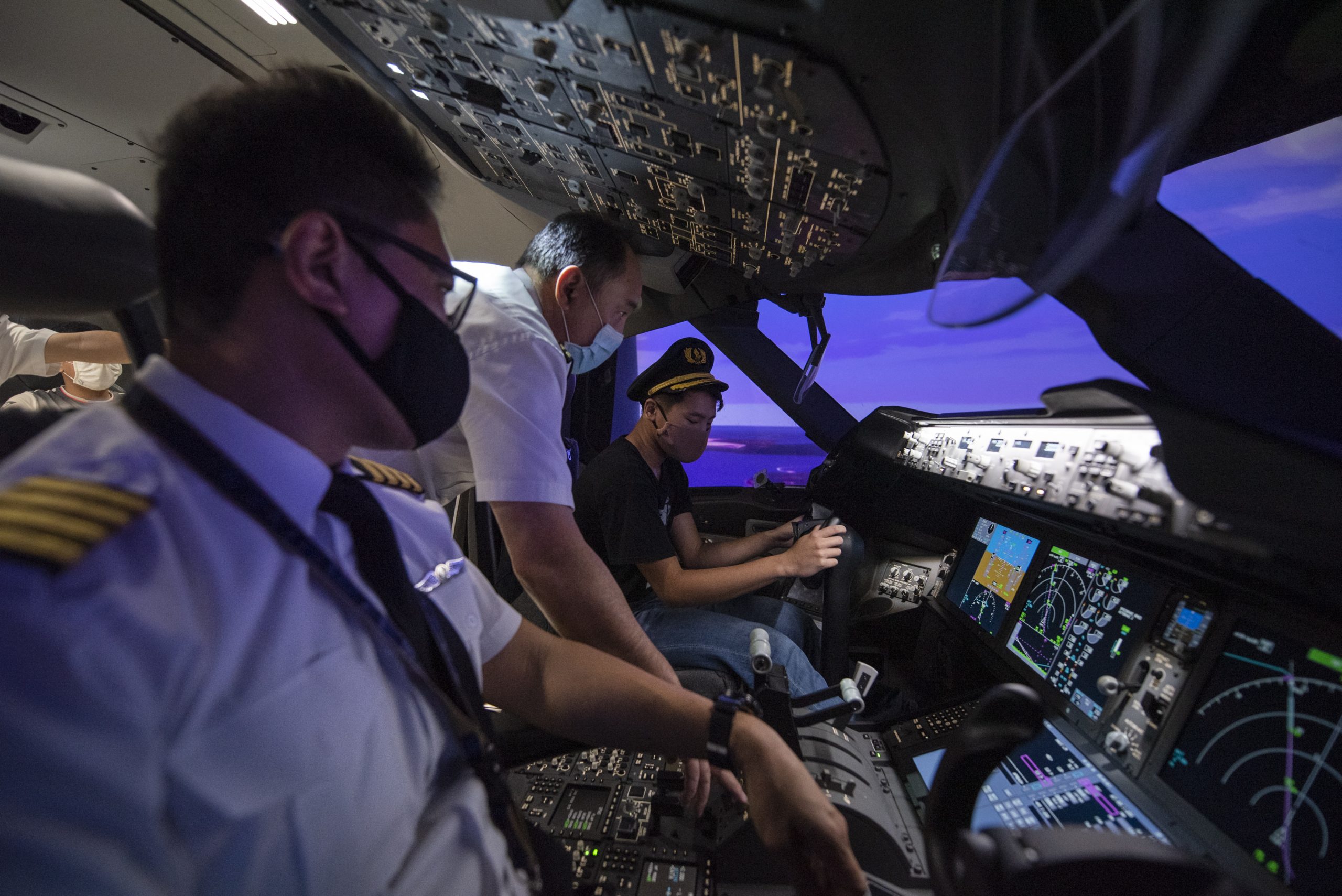 (Above) (L-R) B787 Line instructor pilot, Captain Edmond Goh, and B787 deputy chief pilot Captain Quek Swee Tiag, guide a participant as he tries to land a plane in the full flight simulator.

Tour groups were led through the snaking corridors of the SIA Training Centre, each station showing part of the training cycle of SIA’s acclaimed cabin crew, as well as pilot training facilities, heritage and SIA’s sustainability showcase. The crowd favourite was undoubtedly the flight simulator.

“You can go for a ride, like at Universal Studios. After I went for a ride in the plane, I received the junior (pilot experience) cert!” recounted Mr Shaun Tan, 22, a participant under the DSA.

Tours and activities were led by SIA staff volunteers, including office staff and cabin crew, who found themselves delivering a very different type of service experience. 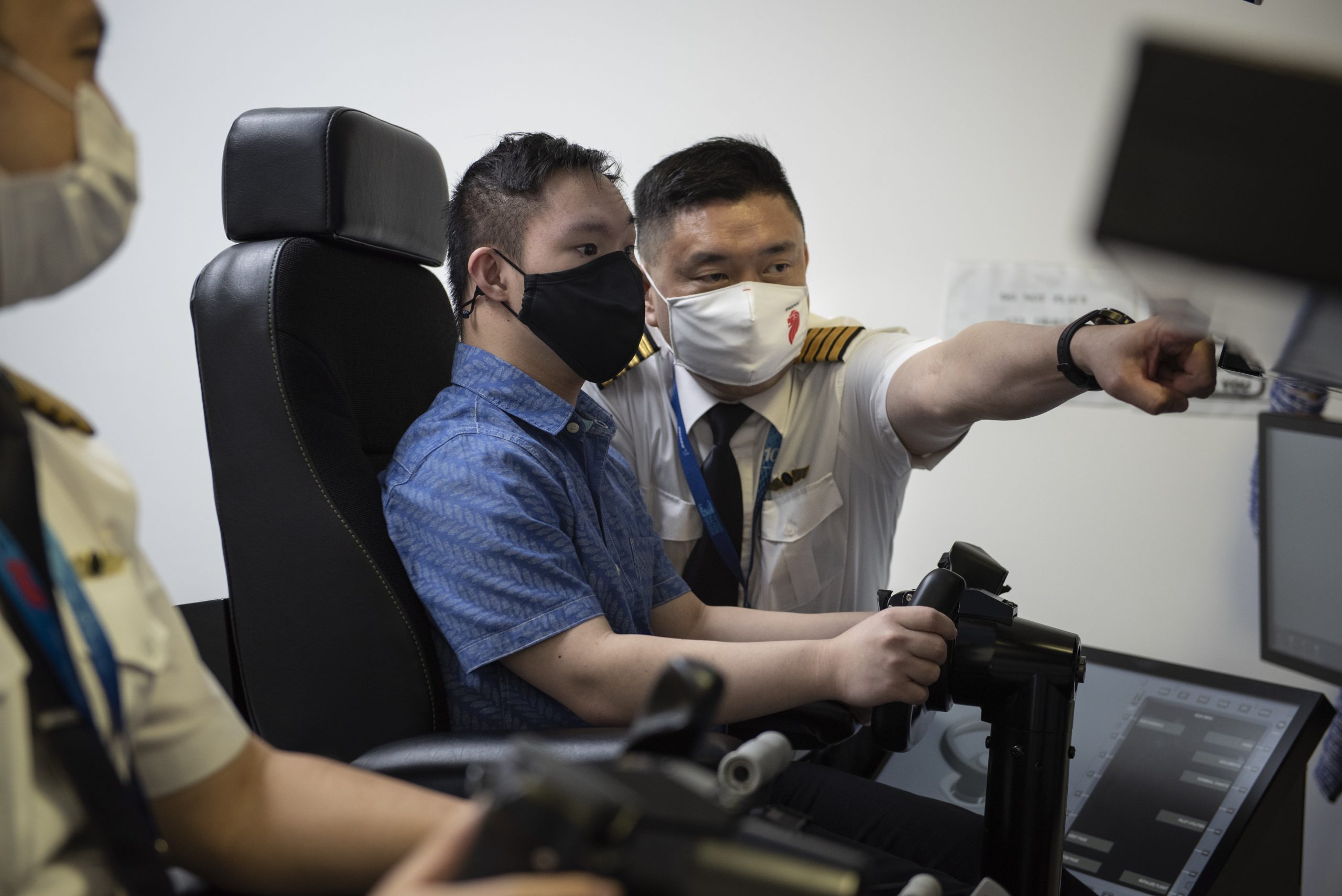 (Above) Captain Ken Lee, B787 assistant chief pilot, teaches Mr Shaun Tan, 22, how to fly and land a plane during his junior pilot experience in a static flight simulator.

Captain Png Sengyuan, who usually focuses on the safety of passengers and crew, and the operations of the aircraft itself, was one of the facilitators for the flight simulator.

“We don’t have much opportunity to interact with passengers,” he said. But that day, he encountered a boy of about eight years old with special needs.

“It had been a long day for him, and I guess he was tired from all the walking. He didn’t want to walk anymore, and with care and patience, I saw one of the caregivers piggyback him. As he arrived with the group to where I was stationed, he started to walk again and came straight to me and held my hands wanting to be led to see the simulators. That made my day!”

The experience, he said: “Has allowed us to interact and share our views and experience as a SIA pilot with the public, and it was enlightening for them.”