What Are You Doing SG?
Home Stories Features More Who Need Help, Fewer Donations: How Charities in Singapore Do More...
Share
Facebook
Email

(Photo above) Ms Grace Xu (extreme right) and her team at AWWA have seen caseloads triple over the Circuit Breaker period. They continue to go beyond their call of duty to help families in need. BRYAN VAN DER BEEK

Along with the risks to physical health, Covid-19 threatens emotional wellness.

Already on the brink of poverty or suffering mental illness, many individuals became prone to emotional and psychological distress during the lockdown, leaning on counsellors more than ever. Although virtual exchanges let social workers reach the vulnerable, they also stymied their usual approach — that of connecting face to face, and from the heart.

Noting that many of their donors have been laid off or lost incomes, 365 Cancer Prevention Society, whose mission is to spread awareness of cancer prevention, summed up the primary pain currently facing social service agencies: “An increase in recurring donation cancellations, a large decline in new donations”, while being kept from in-person visits to communities to sustain outreach.

As donations slide, their primary concern is how to do much more, with far less. In the worst cases, some reported up to an 80 per cent loss, while most experienced around 50 per cent drops. 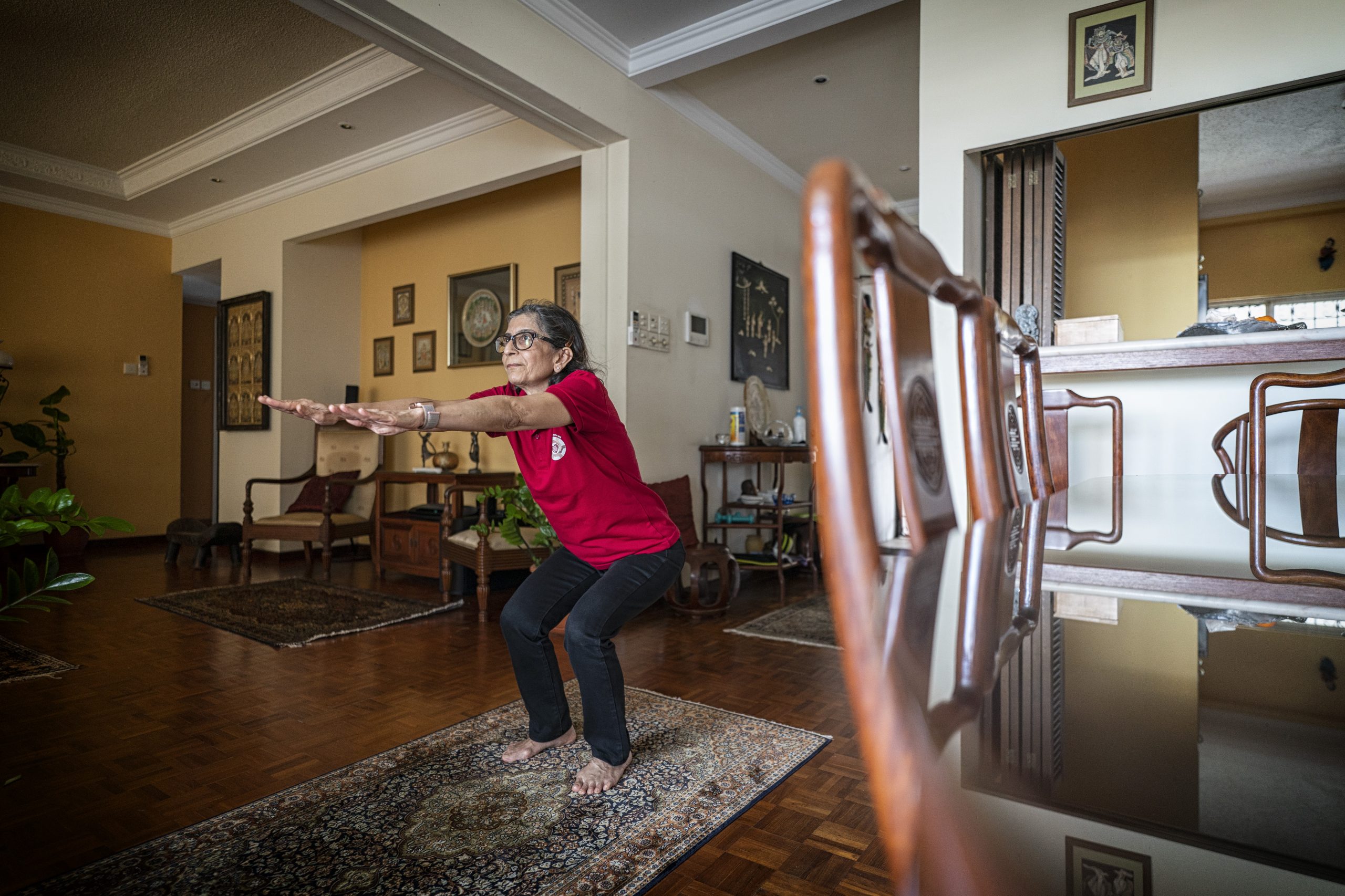 (Above) With support from Singapore Heart Foundation, Ms Kirti Harnal does warm-up exercises taught by the Heart Wellness Centre and yoga at home. She also ensures that she clocks between 8,000 and 10,000 steps even while at home. BRYAN VAN DER BEEK

Through the Circuit Breaker, some setups redirected internal funds to ensure at-risk clients received meals and necessities. Others went beyond their original scope to extend childminding to low-income families with breadwinners in essential services.

How Those Who Help Others Cope, Cope
To manage internal challenges, social service agencies said they relied on team work, and celebrated small joys to get through tough days.

Staff of Babes, whose work is to assist and support teenage girls in a pregnancy crisis, mainly counsel “girls who are destitute because they ran away from home, as they couldn’t reconcile with their family due to their choice regarding their pregnancies,” said Ms Pearlyn Tan, its volunteer management executive.

“Much of our work involves family mediation and we closed many cases where families reunite,” she added, and workers have been encouraged to attend courses so they can move their face-to-face sessions online. Its team now relies on Zoom sessions for support and advice.

Care Community Services Society (CCSS) has a multi-prong mission, addressing the needs across several communities: disadvantaged children with a safe after-school environment; vulnerable seniors with meaningful engagement in Seniors Activity Centres; at-risk youths with opportunities to discover their innate potential through youth programmes; ex-offenders with resources to support their journey of reintegration; older individuals with cognitive care, and assistances to other persons-in-need.

“In spite of everything, humans are rather resilient, perhaps more so than we thought. We have found creative ways to keep working, restart old hobbies and try our hands at new ones. We have also seen more cheerful faces on Zoom, perhaps also indicative of joy to see colleagues again.”
Ms Christine Wong, executive director Caritas Singapore

The registered charity serves more than 1,000 beneficiaries. Because it had to shut major services including its Seniors Activity Centres and dementia care services, it switched to e-engagement to stay connected as much as possible, through Microsoft Teams and Zoom.

Its executive director Mr Dewin Lee said: “Our team of counsellors are also part of the National Healthcare Hotline to attend to calls from the public. We have seen an increase of people dealing with anxiety issues and we have provided care to them and have also issued groceries vouchers and financial aid to those in need.”

Even so, he pointed out, even simple activities proved difficult during the lockdown: “It was important for us to come up with physical worksheets and courier hard copies to dementia patients, because some of them can’t even print them out.”

Once a week, he added, staff would meet to share their positive experiences, while supervisors also made sure their teams had much-needed time off.

Caring for Carers
Meanwhile, the Singapore Heart Foundation distributed care packs with snacks, sanitisers and masks were distributed to its staff to encourage them and ensure their safety.

“Occasionally, we also organise virtual workout sessions over Zoom, led by our physiotherapist,” said Mr Vernon Kang, its CEO. In addition, staff received a work-from-home allowance over the Phase 1 and 2 periods. 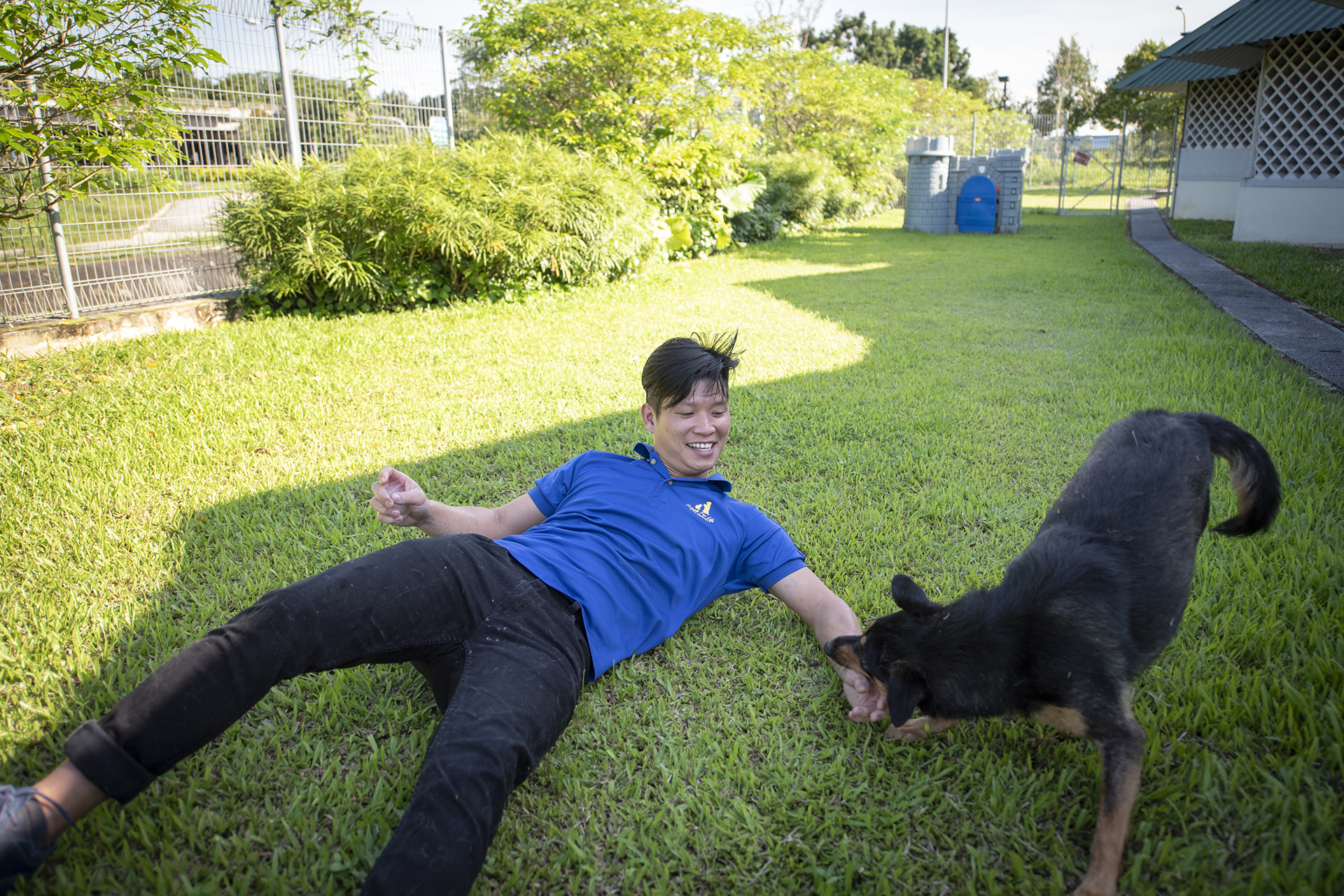 (Above) For Yao Huang, shelter supervisor at SPCA Singapore, one challenge during the Circuit Breaker has been re-homing animals living in the shelter. The SPCA seeks the support of committed volunteers to care for animals like Xena, a two-year-old Singapore Special. CAROLINE CHIA

AWWA’s CEO Mr JR Karthikeyan said the Circuit Breaker was “stressful, and anxiety ran high” at his organisation. Daily operations had to be adjusted to accommodate staff who now needed to stay home for a full five days of medical leave each time they fell sick, while the organisation had to put off hiring or using volunteers.

“We had to rally and cross-train or deploy staff to centres which remained opened,” he said.

To counter these upheavals, its leaders prioritised offering encouragement and recognition of everyone’s efforts at its weekly virtual sharing sessions. Team leaders, supervisors and middle managers routinely checked in on social workers.

“Keeping staff focused, motivated and positive was our central focus; and this was done through our weekly virtual sharing of how the other teams were performing.”

Boys’ Town’s assistant manager Ms See Ruoying attributed the adaptability of its staff to its cohesive culture. “They have been very supportive in meeting work demands”, despite working from home or on shifts. As the weeks stretched to two months, executive director Dr Roland Yeow said the community in Boys’ Town became stronger.

“It was important for us to come up with physical worksheets and courier hard copies to dementia patients, because some of them can’t even print them out.”
Mr Dewin Lee, executive director of Care Community Services Society

“The Circuit Breaker taught us how to be resilient,” he said. “Previously, the kids would spend about 50 per cent of their time at school, then came home. But because they were all together so much more, the bonding was strengthened. We gained understanding and acceptance, and looked out for each other.”

Looking Beyond Ourselves
While this Covid-19 period has made many of us pause to consider the plight of other people around us, the resulting state of the economy will have other indirect, but equally dire effects.

“We are worried about how the economic situation is going to affect the lives of people in Singapore,” says Dr Jaipal Singh Gill, executive director, SPCA Singapore.

“There will inevitably be animals affected by this too, as their caregivers suffer financially. We expect demand for subsidised veterinary care to rise and we may see animals being given up because their guardians are unable to continue looking after them.”

Because SPCA rescues abandoned pets and sick and injured animals found on the streets, the risk of quickly filling up their space was high, as movement restrictions meant fewer adoptions. 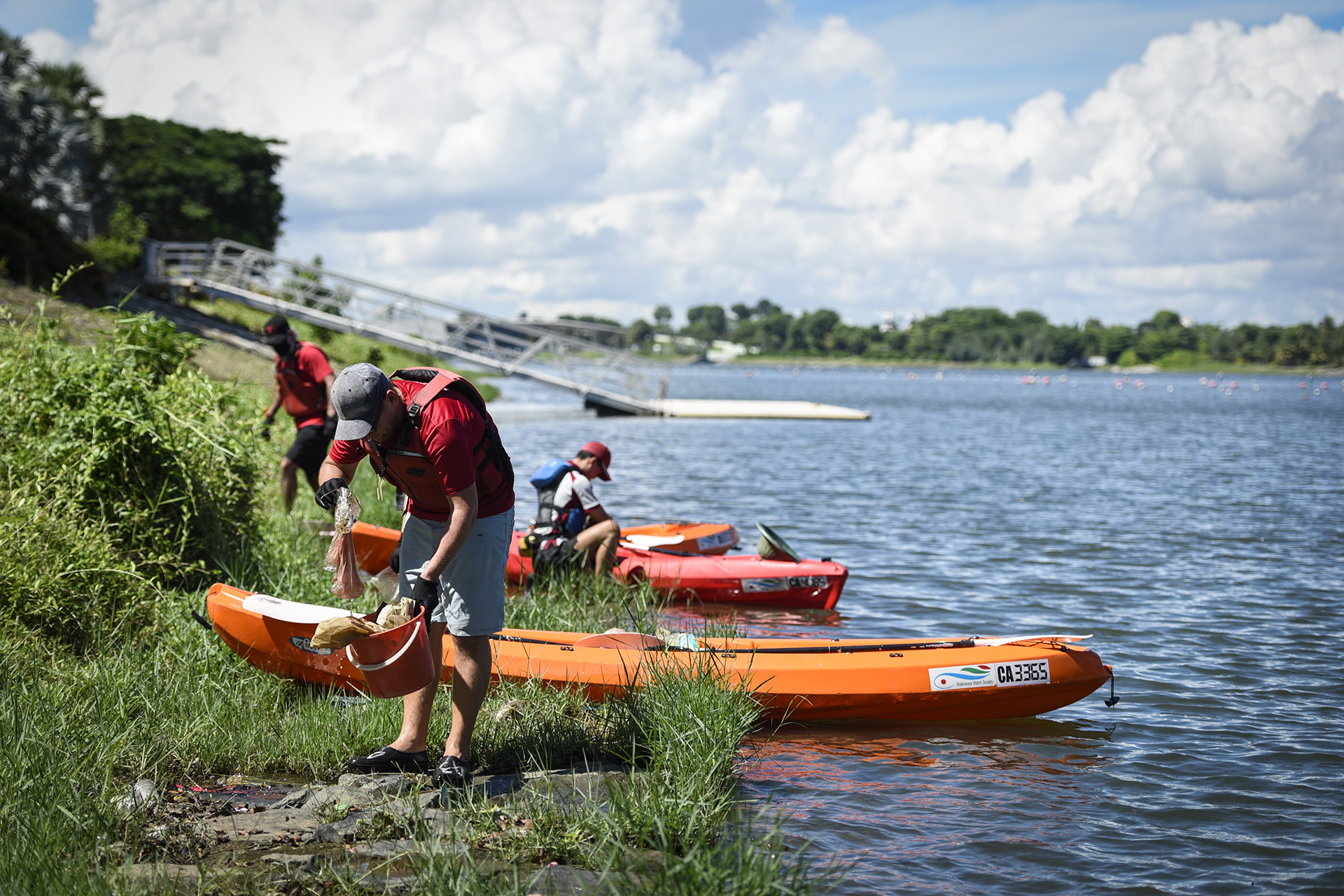 (Above) Engagement and education around Singapore’s water environment is key to Waterways Watch Society’s (WWS) mission. WWS runs programmes to educate people on the importance of a clean environment. CAROLINE CHIA

“As we run a 24/7 animal rescue service, we frequently have animals coming into the shelter which will eventually fill up the spaces,” says Yao Huang, SPCA’s shelter supervisor, who has worked there for the last eight years.

For Eugene Heng, CEO and founder of Waterways Watch Society, he recognises that the environment is the lowest priority on most agendas.

Heng has spent the last 22 years trying to educate and engage residents about the importance of the water environment and keeping it clean. But when Covid-19 hit, the organisation lost close to $150,000 in revenue, and is only in Phase 2 able to start picking up engagement programmes with schools and corporates.

“Littering and cleanliness are important things,” says Heng. “We believe that it’s everybody’s responsibility to know and appreciate our water.”

“There will inevitably be animals affected too… as their caregivers suffer financially. We expect demand for subsidised veterinary care to rise and we may see animals being given up because their guardians are unable to continue looking after them.”
Dr Jaipal Singh Gill, executive director, SPCA Singapore

The non-profit organisation relies on private donors to maintain their space and continue its educational programming, which includes collaborations with Outward Bound Singapore and engagement activities with the likes of the Assumption Pathway School and the National Cancer Centre Singapore.

Caritas, the official social and community arm of the Catholic Church in Singapore, is an umbrella body for 27 Catholic charities and organisations whose programmes reach a broad spectrum of needs including the poor, prisoners, elderly, people with HIV/AIDS and those with disabilities, as well as people with legal and medical needs, among several other concerns.

Said Ms Wong: “In spite of everything, humans are rather resilient, perhaps more so than we thought. We have found creative ways to keep working, restart old hobbies and try our hands at new ones. We have also seen more cheerful faces on Zoom, perhaps also indicative of joy to see colleagues again.”

Read more about how Social Service charities and volunteers are coping during Covid-19 in Singapore:

Catch The City of Good Show, every Wednesday, 8pm, Live on Facebook. Support Social Service charities such as Singapore Heart Foundation with the Dream Academy gang on HOME IMPROVment. The sector enhances the well-being of the community, with its professionals and volunteers working relentlessly to help families and individuals overcome issues.

Play your part and support the charities at Giving.sg – The City of Good Show: Social Services