What Are You Doing SG?
Home Stories Features How a Former Manhunt Finalist Rises Above His Rare Blood Disorder
Share
Facebook
Email

(Photo above) Mr Nicholas Lim was born with haemophilia, but he does not let the rare blood disorder hold him back from fulfilling his dreams. The full-time swimming instructor hopes to inspire younger haemophiliacs, who tend to fall into depression and anxiety-related issues more easily.

You would think someone who genetically cannot stop bleeding if injured, would want to live life in a protected bubble ala Jake Gyllenhaal’s character in the 2001 movie, Bubble Boy.

But 30-year-old Nicholas Lim, a beneficiary of the Haemophilia Society of Singapore (HSS), has taken a whole other route.

He pumps iron six times a week, has taken part in six triathlons, and is so sculpted that he was even scouted to participate in the male beauty pageant Manhunt two years ago.

Mr Lim is one of about 300 Singaporeans who suffers from haemophilia, a rare genetic blood disorder. It affects the body’s ability to make blood clots – a process which stops bleeding. People with haemophilia don’t bleed faster but bleed for a longer time. Among other things, this results in an increased risk of bleeding inside the joints or the brain.

In between his work out sessions, Mr Lim undergoes a treatment with Factor 8, an essential blood-clotting protein, thrice a week. He also suffers from an old ankle and shoulder blade injury which needs extra attention. 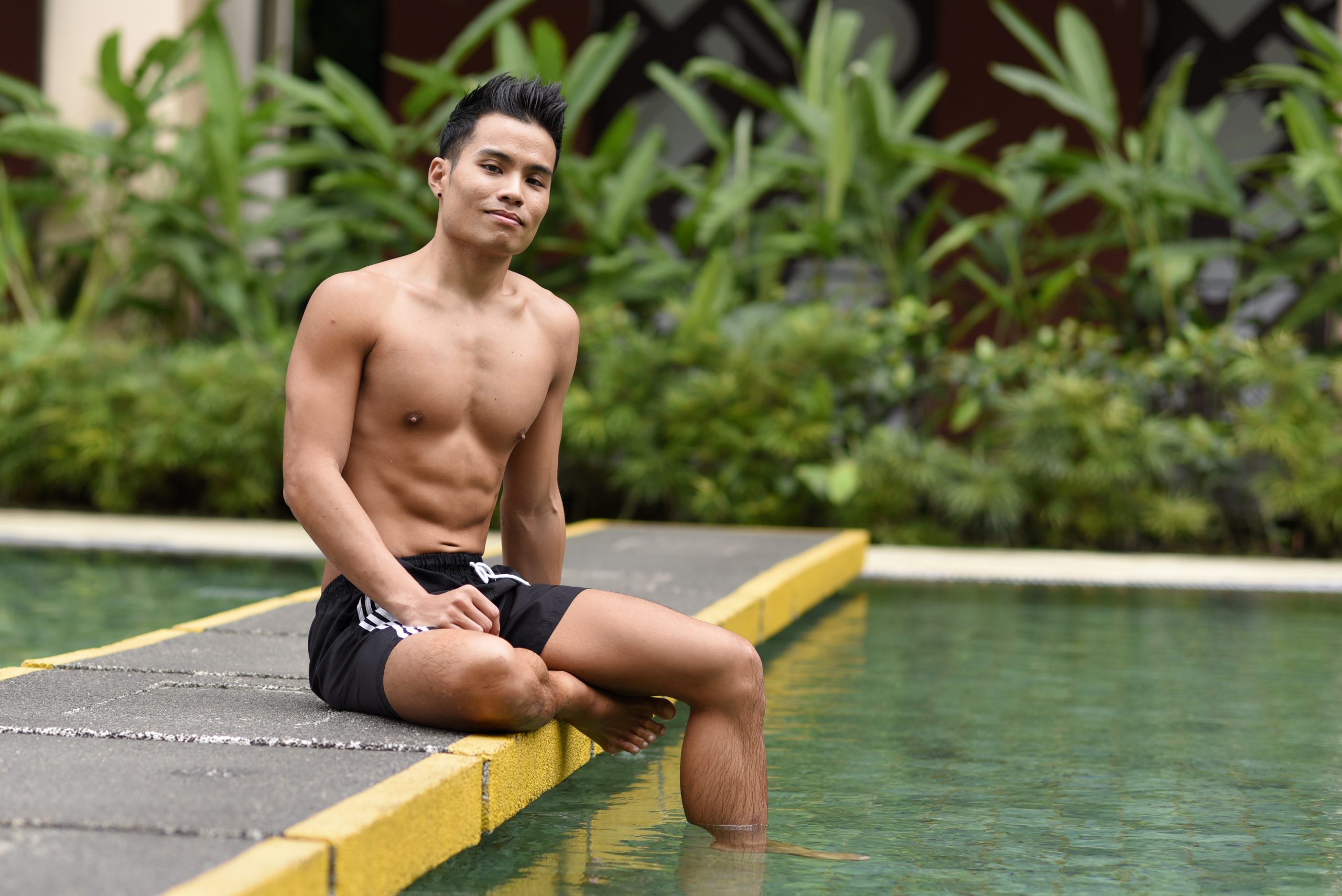 (Above) Mr Nicholas Lim swims two to three times a week and works out at the gym regularly to keep fit. Haemophilia and the constant bleeding in his right ankle has resulted in early arthritis. However he hopes to strengthen his right ankle so that he can trek to Mount Everest Base Camp by age 34, and hopefully summit Mount Everest one day.

At present, the HSS is aiming to raise $150,000 in funds by June next year to help support patients like Mr Lim.

The Society is one of four relatively under-the-radar healthcare-related charities which are participating in the National Volunteer and Philanthropy Centre’s SG Cares Giving Week Fund.

The others include the Epilepsy Care Group, Cancer Wellness Limited and Thong Chai Institute of Medical Research.

Like epilepsy which affects one in 50 people, haemophilia is rare and happens to only one in 5,000 males, which sometimes makes for a lonely journey.

In Mr Lim’s case, he faced taunts from bullies in school. At 11, he weighed a hefty 60kg, having been exempted from physical education classes. “In dialect, my classmates called me names like ‘fat pig’.”

At times, he would cry to himself, wondering why he had been born with such a disorder.

“I used to cry and wonder why I was born with this disorder. I realised along the way that I should not let the disorder define me. I have control over my own body and destiny.”
Mr Nicholas Lim, beneficiary, Haemophilia Society of Singapore

Pointing at how severe his condition can get, Mr Lim said, “I’m considered a moderate case but for people like us we have to err on the side of caution. Once, I suffered internal bleeding in my brain because I had walked into a lamppost while reading a book.

“According to the doctor attending to us, if my mother had delayed bringing me to the hospital, I would have suffered from brain damage.”

Having been diagnosed as a baby, Mr Lim grew up with a phobia of injections. It did not help that the disorder required him to make tri-weekly visits to the hospital to receive injections to help his blood clot. “My parents had to swaddle me with a blanket so nurses could inject me on my arm. I was terribly fearful of injections and didn’t understand what was happening.”

Since then, he has overcome his fear of needles and injects himself at home thrice a week, each time with 1,000 International Units (a measurement of drugs and vitamins) of Factor 8. 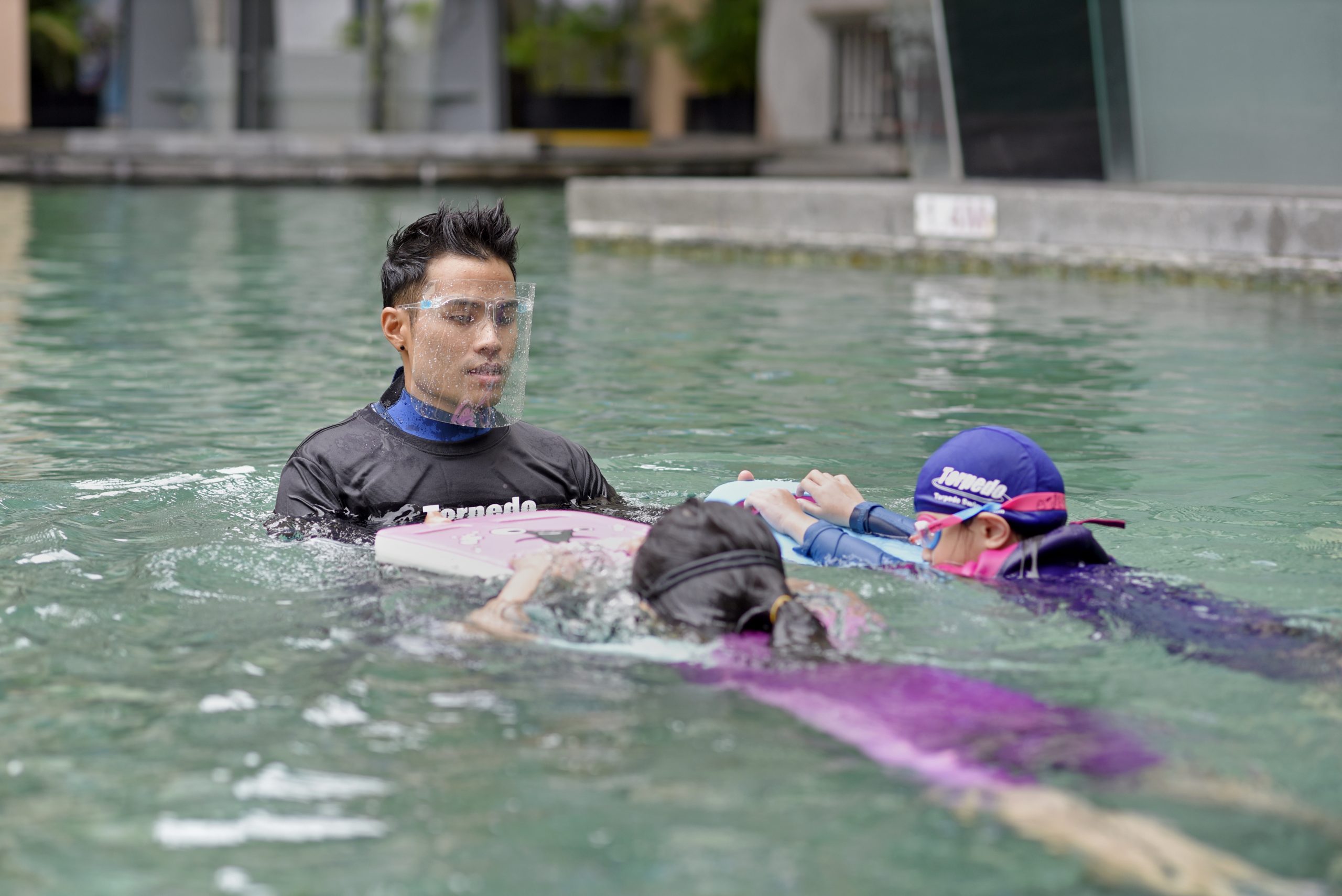 (Above) When he’s not in training, the full-time swimming instructor spends most of his time in the water teaching children.

Society president Dr Gan Kim Loon, 70, a general practitioner at a clinic in Bedok Reservoir Road, noted that while treatment of haemophilia is very expensive, it is essential for patients to get regular treatment.

He shared that medical science has improved by leaps and bounds such that individuals with the disorder can live a normal lifespan — a far cry from pre-1960s when most barely made it past 11, and in the 1980s when the average life expectancy was 50 or 60 years.

Dr Gan said the pandemic affected the voluntary welfare organisation’s fundraising activities this year. Usually, the Society hosts a movie premiere where $100,000 is raised at a go.

“As a result of Covid-19, we’ve only managed to do a calendar sale. So we’re still appealing for donations to meet our annual fundraising target of $250,000 to support our beneficiaries.

“You can donate to us via our Giving.sg page or by writing to us. Ninety per cent of what we raise goes towards subsidising the treatment of our patients at KK Women’s and Children’s Hospital, the Singapore General Hospital and the National University Hospital,” said Dr Gan.

Mr Gan said Mr Lim’s story is encouraging to his other “blood brothers” in Singapore who can look at his life and feel hopeful that the possibilities are endless.

Mr Lim added, “I used to cry and wonder why I was born with this disorder. I realised along the way that I should not let the disorder define me. I have control over my own body and destiny.”

Haemophilia Society of Singapore is part of NVPC’s SG Cares Giving Week Fund, which was set up to help charities (with an annual gross income of less than $500,000) sustain themselves with the needed financial resources so that their good work for the communities they serve can continue.