(Photo above) Nur Ellysha Muhammed Lor (right), 10, and her two siblings are all smiles and laughter as they receive their gifts from Project Grant a Wish. CAROLINE CHIA

Four months of intensive planning came down to eight hours of sending 367 children back to school — with dignity.

More than 100 volunteers of all ages had worked at “Project Grant A Wish – Back to School”, so children under the age of 16 could receive requests for up to three school-essential items to kickstart 2021.

The event was organised as a collaboration between Ramadhan Grant A Wish (RGAW) Club and Kembangan-Chai Chee (K-CC) Social Team. Through it, donors could “adopt” children’s wishes, buying them one of the three items on their list, which would then be wrapped and delivered to recipients.

Ms Eileen Lim, 50, a volunteer said: “Even though we gave a limit of $50 per child, many of the donors decided to go above and beyond, granting all three wishes of the child they had ‘adopted’.”

On December 5, 2020, at the Kampong Ubi Community Centre’s function hall, which became a makeshift gift-wrapping factory, the homemaker showed what was going into the presents. The most unique, she said, was a calligraphy set and a guitar.

The initiative, which ran in partnership with K-CC for the first time in 2019, received 50 wishes from the Chai Chee Estate. Although originally scheduled for the same season this year, Phase 1 of the Circuit Breaker kept the RGAW team from reaching out to low-income families. 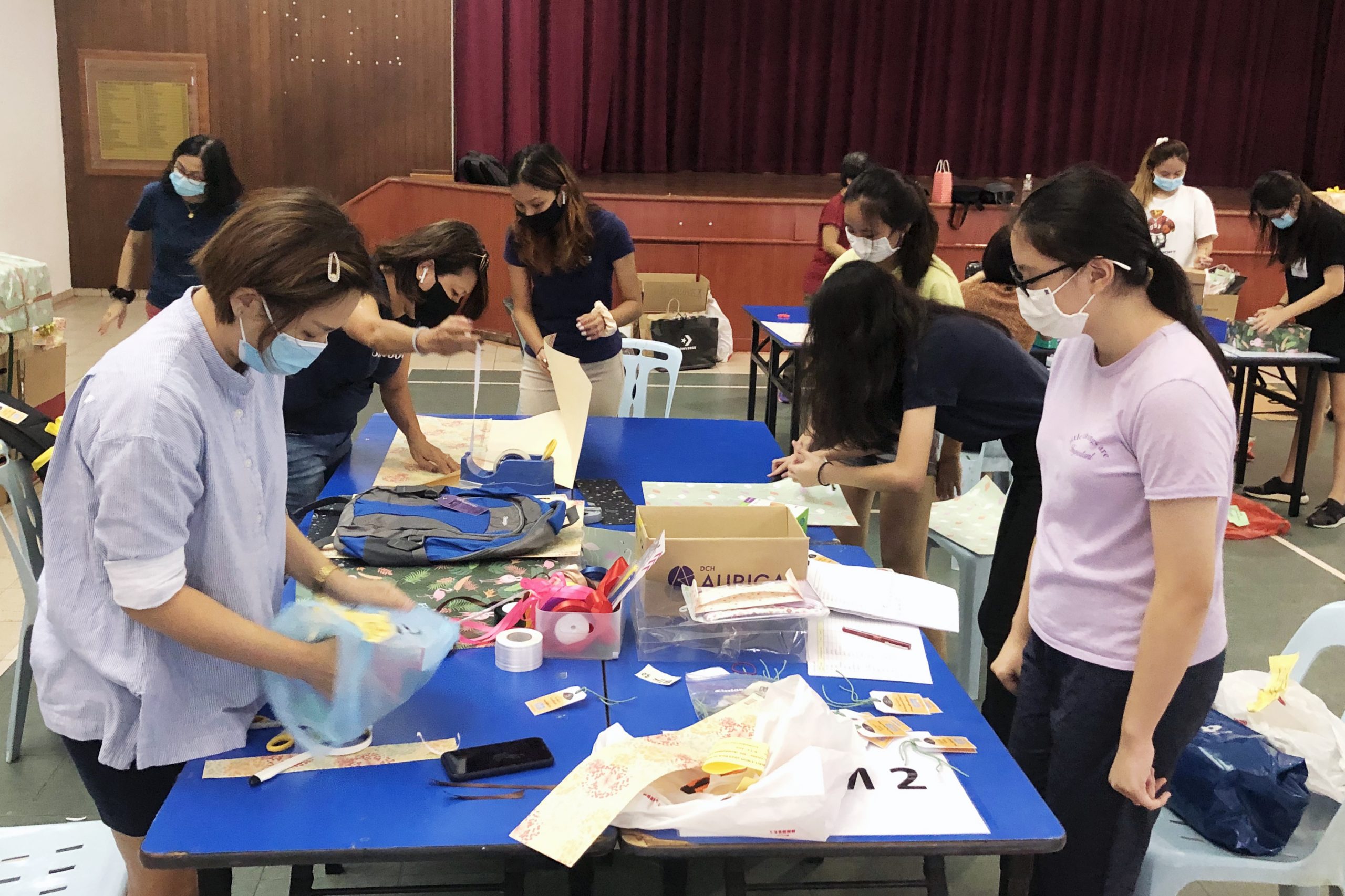 (Above) Volunteers wrap presents for children. According to Ms Eileen Lim, a volunteer, the most popular gifts were school essentials such as school bags, shoes and stationery sets. AUDREY LEONG

Ms Norlinda Ishnin is one of its founding members together with five others who were all schoolmates at Tampines Junior College said: “During the home-based learning period, we were looking for opportunities to help these children through these tough times. At the same time, the adults of these families were affected by the loss of jobs.”

Seeking another way to help households in need, Ms Norlinda, a 50-year-old educator, said that RGAW decided to expand on the existing partnership that they had with the volunteers of the K-CC Constituency to adopt the wishes of children living in rental flats.

Mr Ong Hoon Hong, 48, one of the event’s organisers from K-CC Constituency said the collaboration aimed to help those who were overlooked during the Covid-19 season. He admitted that this year’s restrictions posed an additional obstacle, as the gift-giving now had to operate in smaller, individual groups.

As volunteers continued to shuffle between tables filled with scraps of wrapping paper and ribbons, they took great care to maintain social distancing restrictions. This included wearing masks, and ensuring a maximum of five to a table.

“In the year of the pandemic, there’s been a large focus on the adults who are struggling in the job market, but what about the children?”

Season’s givings to those getting ready for school
A week after wrapping presents, volunteers headed out to various rental flats to distribute them — the culmination of work that began in October last year.

Volunteers from the K-CC Constituency and RGAW had collected wishes of children aged 16 and below living in rental flats across Singapore. Each was entitled to three wishes for items that would enrich their upcoming school year.

The work was not easy, but volunteers were determined to get every wish. As Ms Helen Yong, 60, said: “It’s not easy to catch (the children’s parents) during the weekend, because many of them were working or resting, so we had to come back multiple times to get their wishes.”

In response, many recipients wrote small, thank-you notes, addressed to names of the wish-granters listed on their gifts.

WAYD speaks to nine recipients of Project Grant a Wish to find out what they received, and their hopes for the new year. 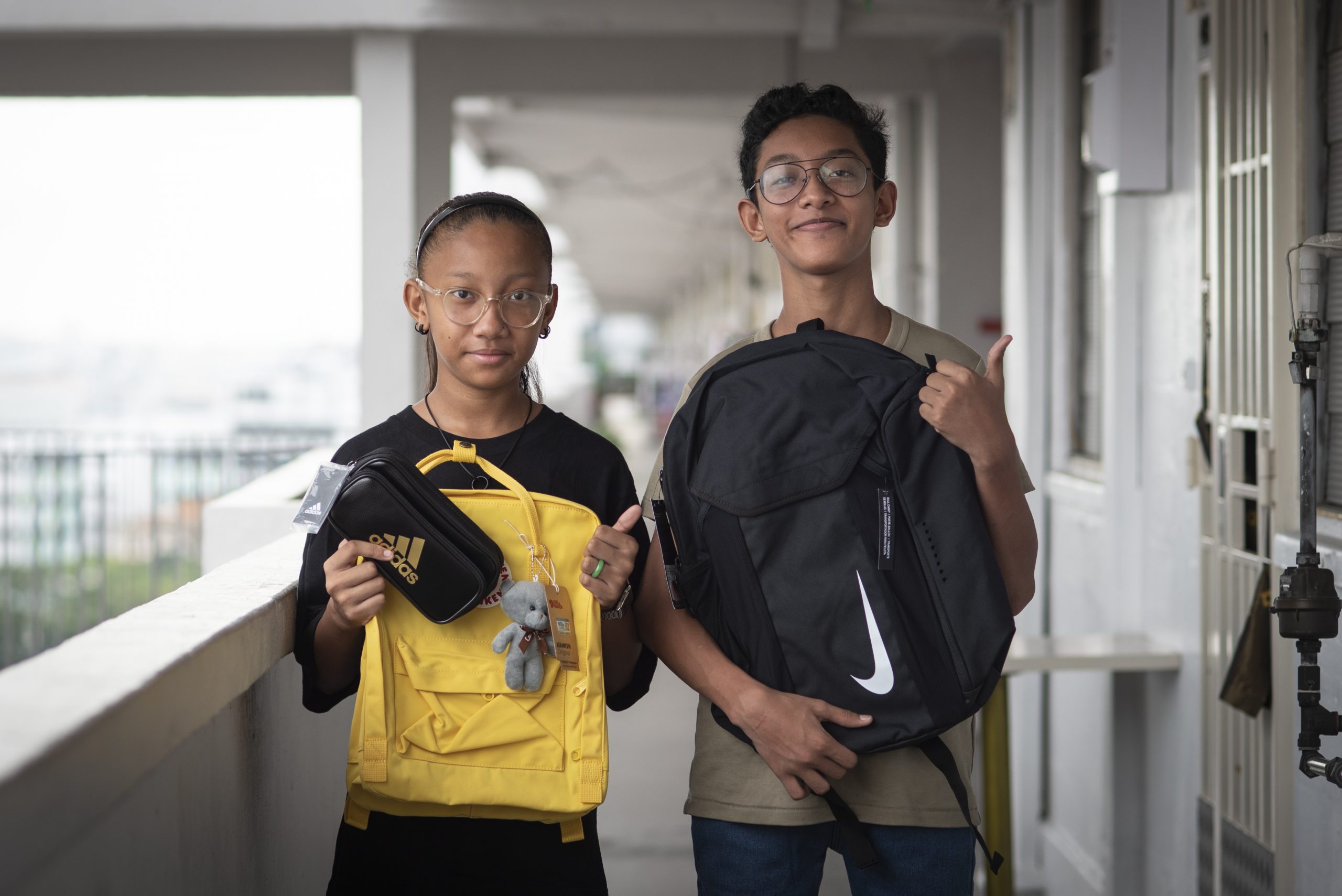 The siblings had spent their wishes on similar items— a new school bag, a pair of school shoes and a pencil case.

Excitedly unwrapping her new school bag, Allysia shyly admitted: “I wanted this bag because my best friend has the same one, just in a different colour.” While she has not revealed the surprise to her best friend yet, the Secondary 2 student shared that she could not wait to use it for school.

Meanwhile, Andryan, the elder of the two, received the black Nike school bag he’d specifically requested. “I’m really thankful and grateful for the gift,” the Secondary 3 student told WhatAreYouDoing.sg. His previous bag, which he’d used for the past two years, had been a hand-me-down from his sister.

With his O-Level exams on the horizon, Andryan hopes to do well enough to qualify for the School of Arts Management, Dance and Theatre at the Nanyang Academy of Fine Arts (NAFA), to continue to hone his skill in Malay dance. 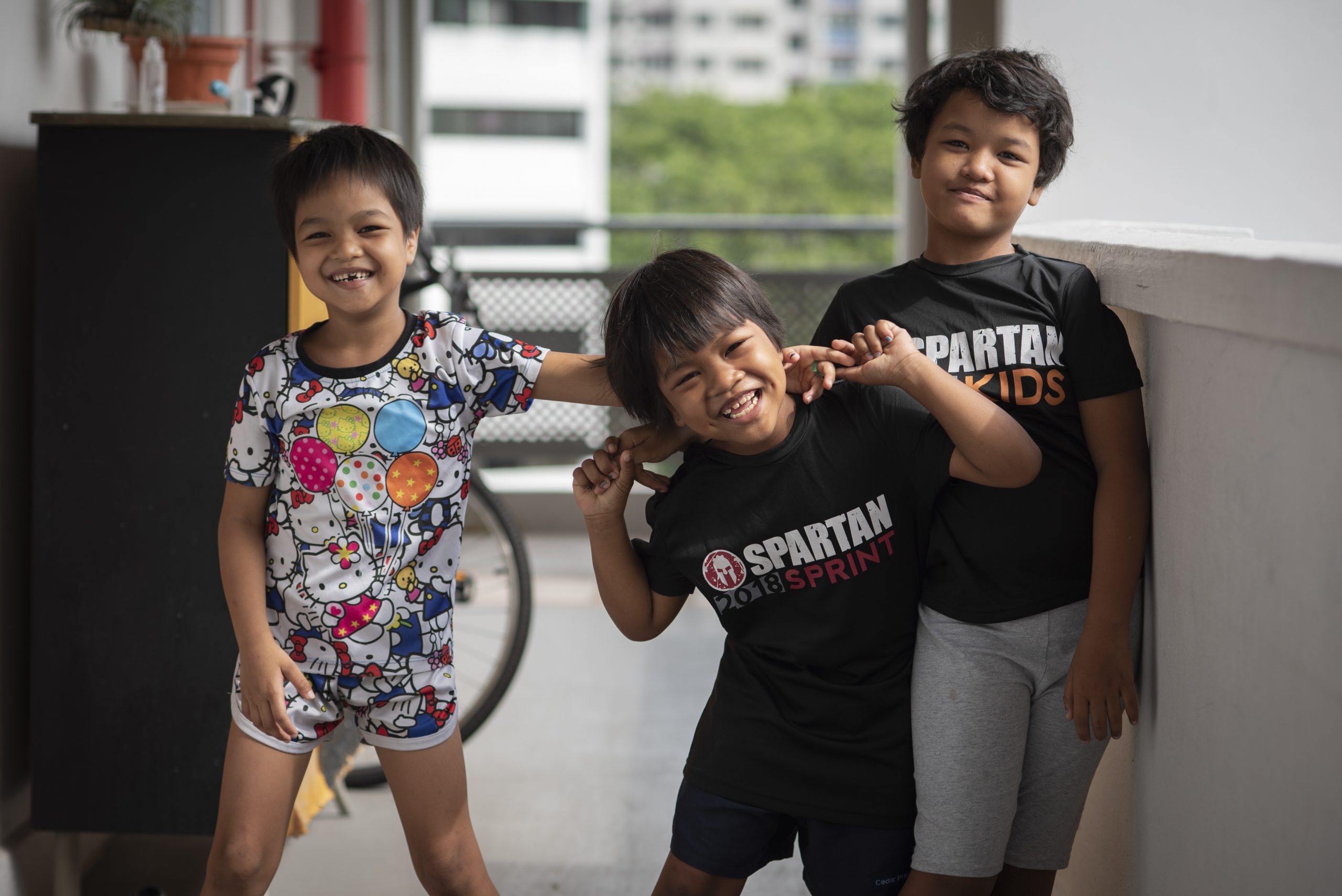 An explosion of laughter and smiles greeted volunteers as they arrived with gifts. Under the watchful eyes of her mother, Ellysha, the eldest of five children, carefully unwrapped the package that she received while her siblings tore into theirs.

The Primary 4 student received a school bag, school shoes and pencil case, all three wishes granted by her donor — just as her sisters did.

At the sight of her new bag, she had just two words: “It’s good!” She previously used a black school bag from stationery retailer, Popular, but now, she said: “I’m so excited to show my friends my new school bag!” 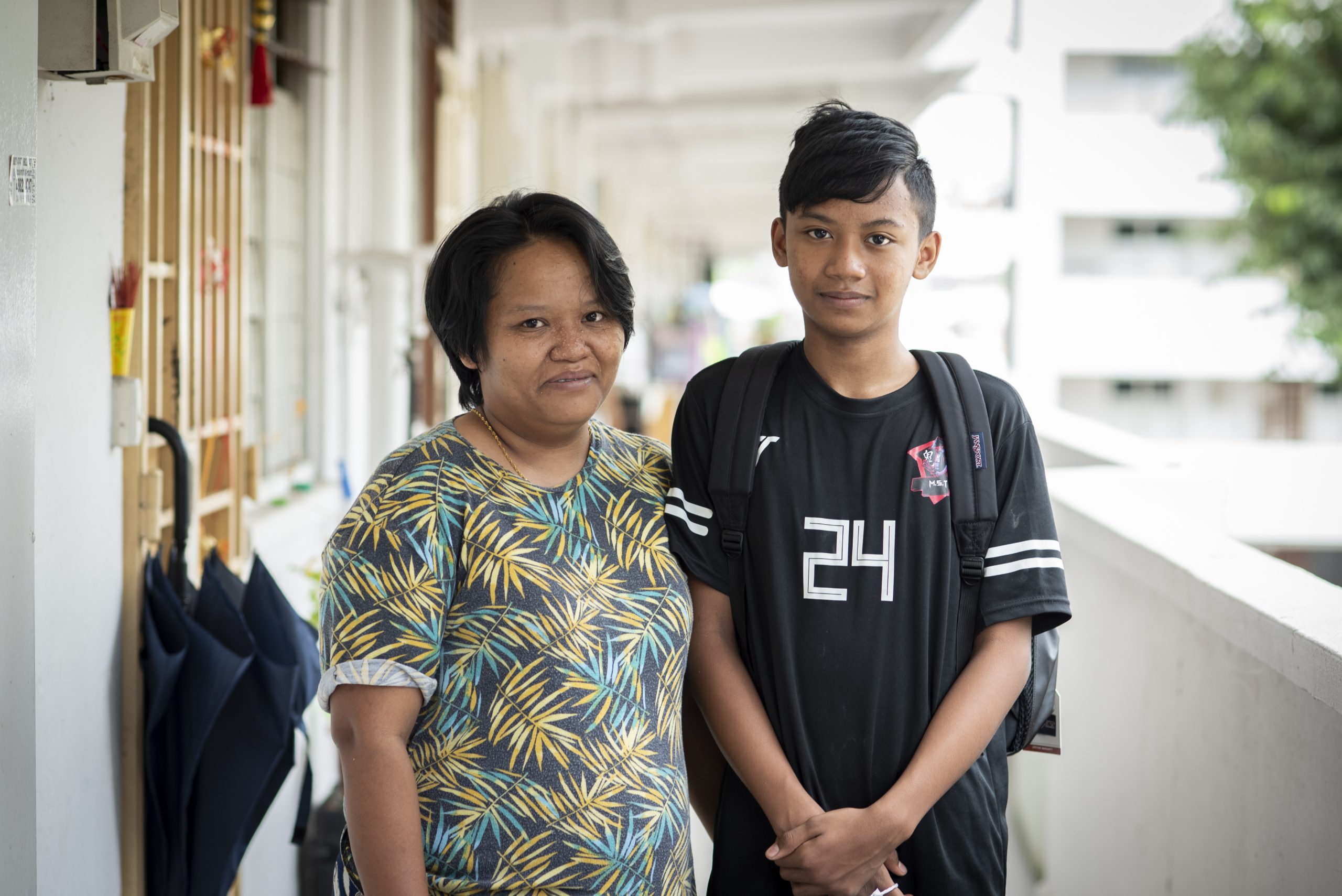 Housewife Ms Suriati, 33, was quick to jump on the opportunity to ask for new items for her children when volunteers came by to ask for wishes.

For each of her six school-going children, aged one to 14 years old, she requested a school bag, water bottle and new wallet. She was relieved to find that all of her children’s wishes were granted.

For her, the granting of the children’s wishes would help the family to save some money on school expenses going into the new year.

Her eldest son, Iskandar, is looking forward to showing off his new bag in the new school year. The Secondary 1 student also hopes that the new year will bring new opportunities for him to play sepak takraw with his friends, which he does daily at a nearby basketball court.

“I want to join the national team in the future,” he told WhatAreYouDoing.Sg excitedly. 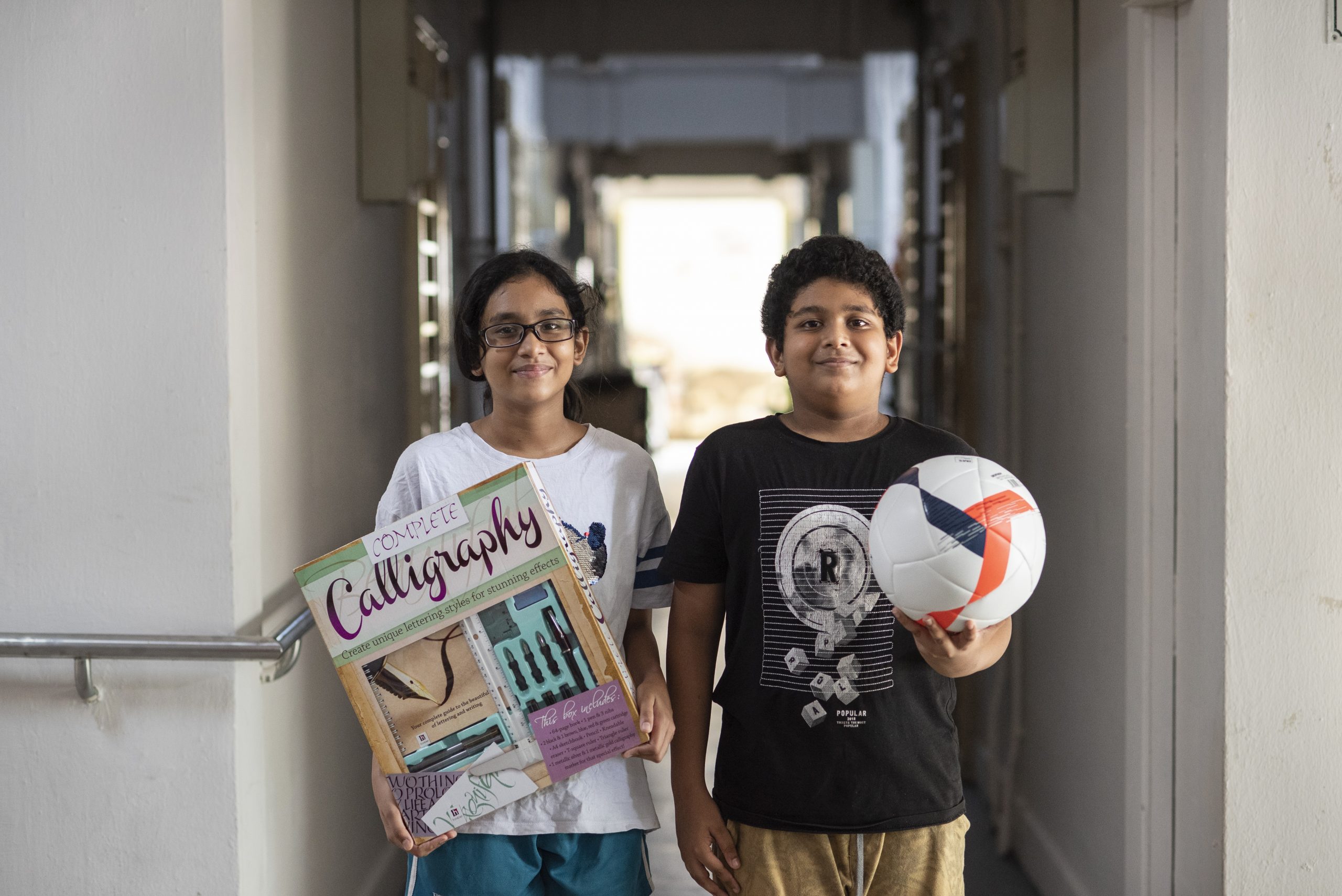 For Rizu Kagheeja, 13, who just passed her Primary School Leaving Examinations (PSLE) this year, 2021 heralds her start at a new school, with new friends and experiences.

The eldest of four children asked for a calligraphy set to take her art to the next level.

Behind her, her 12-year-old brother, Bilal, unwrapped his new soccer ball and pump — he’d asked for a soccer ball, basketball or floorball stick. The pair was huddled against the gate, eyes fixed on their new presents.

“I really needed a new ball,” he said, carefully inspecting its quality as he held it. Bilal is part of his school’s floorball team, in addition to playing other sports such as basketball and soccer with his friends.

The Primary 6 pupil said that he was most excited to go for tuition classes next year. “I want to learn more and make my parents happy, I don’t want to upset them,” he said. 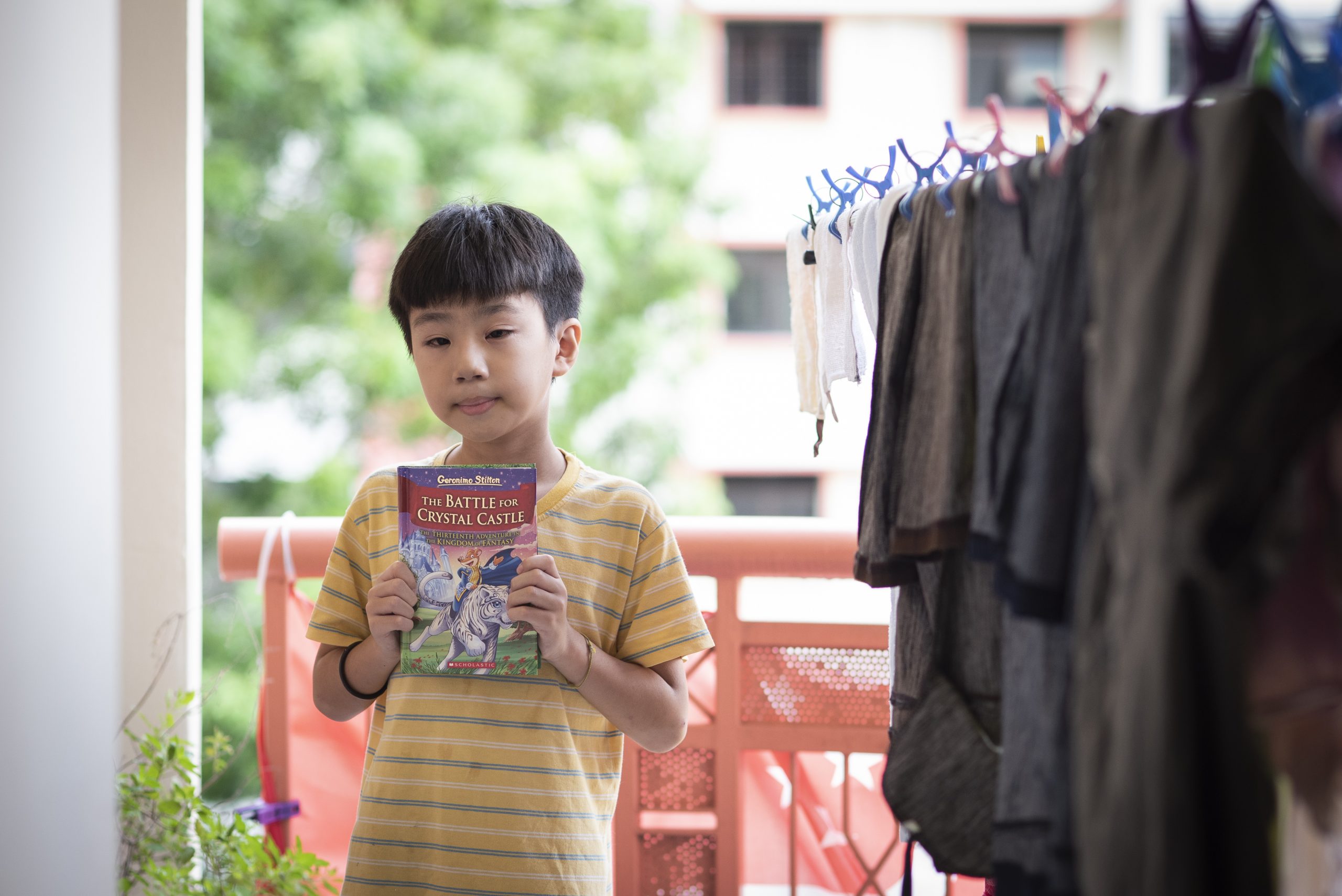 Though he had three wishes, this young boy used just one.

Brandon Tan, 9, requested the book The Island of Dragons, the 12th in the Geronimo Stilton: Kingdom of Fantasy series.

While he did not receive the exact book, he got another book from the same series, The Battle of Crystal Castle. Within half a day, he’d raced through more than 50 pages.

“I feel happy,” he said. “I spend an hour a day every few days reading; and when I’m done with my books, I read them again.”

He currently owns 18 books, which he cycles through, when he’s not playing popular mobile game, Mobile Legends.

In this new year, he looks forward to reading the 14th book in the Geronimo Stilton series, The Keepers of the Empire, which is yet to be released.