(Photo above) Dr Tham Tuck Seng, 50, dons PPE before heading to a patient’s home, in July last year. Even after it was no longer required for doctors to wear PPE during house calls, Dr Tham continued to wear them to safeguard both the patient and himself.

While most families bunkered at home, avoiding malls and crowds at the height of the Covid-19 crisis, the Thams took to the frontlines. Their mission: to tackle the mysterious and highly contagious virus head on.

Ambulance man, Tham Kai, 20, was part of a team of medics who transported Covid-19 patients to hospital. The national serviceman confessed he was “quite terrified and paranoid” of bringing the virus home in the early days of his work at the fore. 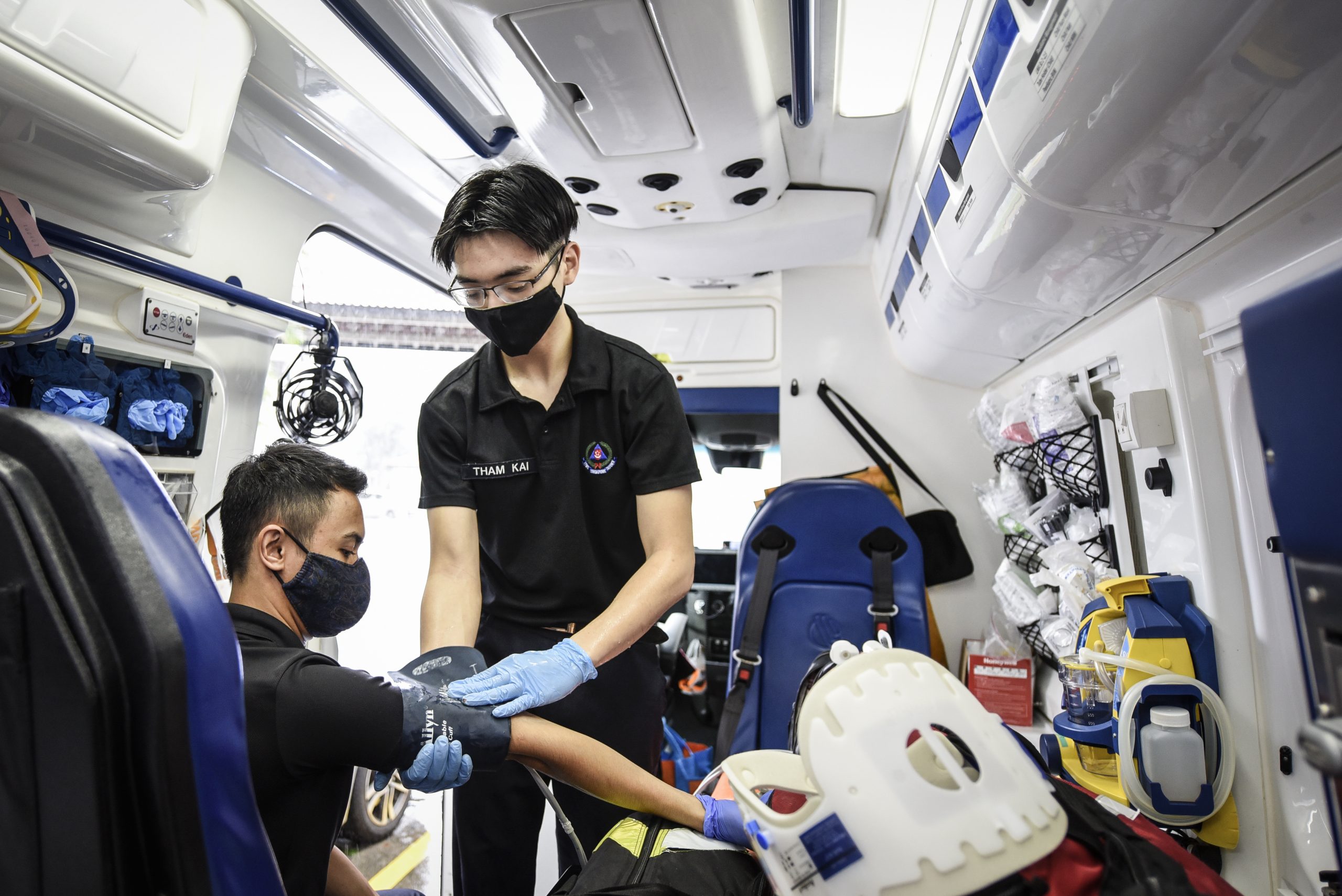 (Above) Sergeant Kai (standing) and fellow paramedic, SGT2 Muhammad Syahir, check and clean the equipment in the ambulance before it heads out on its next call.

After moving his first suspected case, he stripped off his Singapore Civil Defence Force (SCDF) uniform at the doorstep of his family home and plunged it into a pail of soap water as a precautionary measure.

She scrambled to ensure her clinic had sufficient personal protective equipment (PPE) supplies and disinfectants. 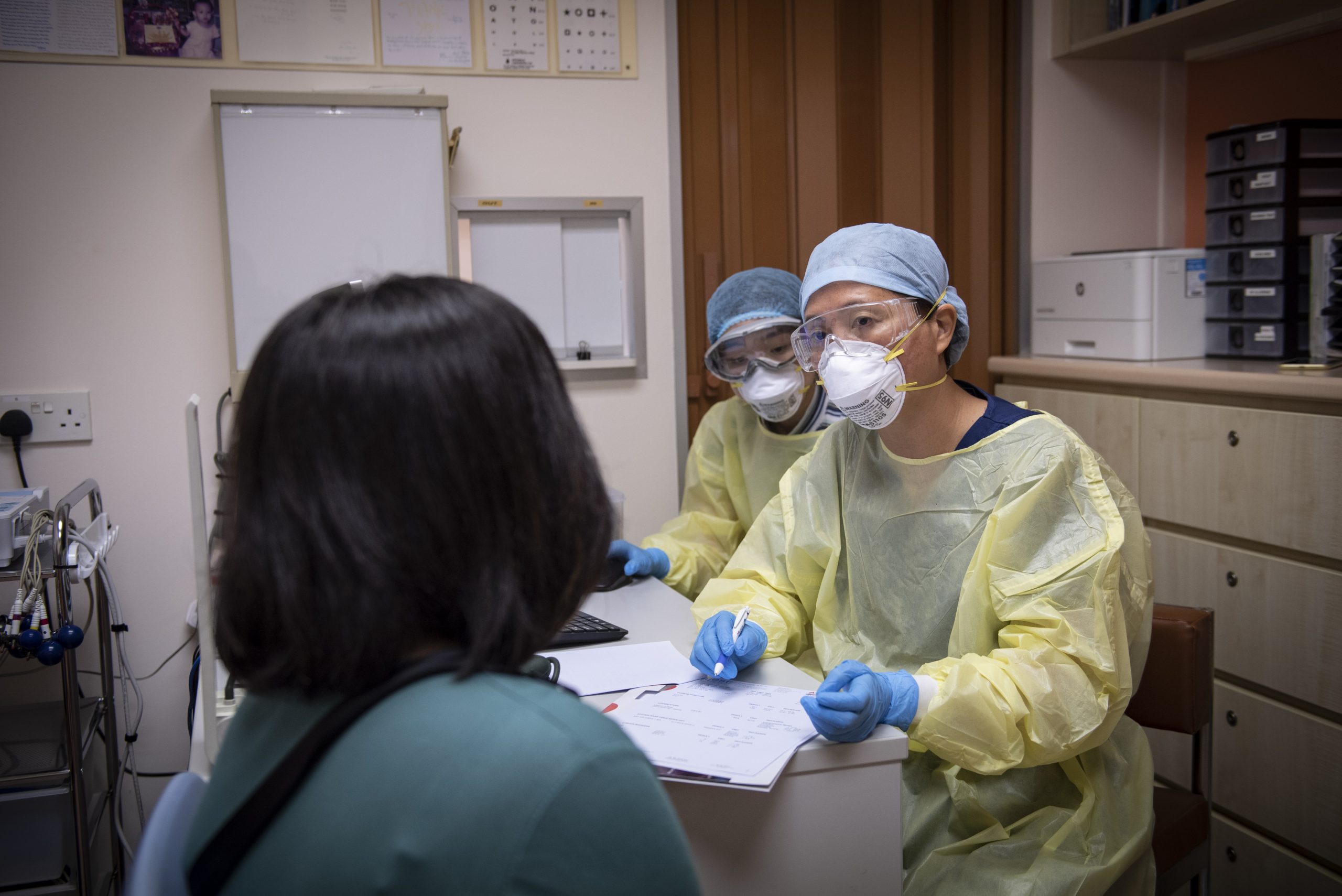 (Above) Dr Teo (right), a general practitioner of 21 years, played a vital role in designing the COSMO (Covid-19 Swabbing Mobile Booth) SafeSwab Slim. There are currently a total of 170 booths used in Singapore.

On hand to assist her, and prepare the clinic for pandemic-time public consultations, was husband and fellow doctor Tham Tuck Seng, 50.

They were acutely aware of the risks they faced as a family, Dr Tham said. But they also realised how critical their roles were to halting the spread of the coronavirus. “Despite the crisis, we carried on because it was about keeping the community safe.” 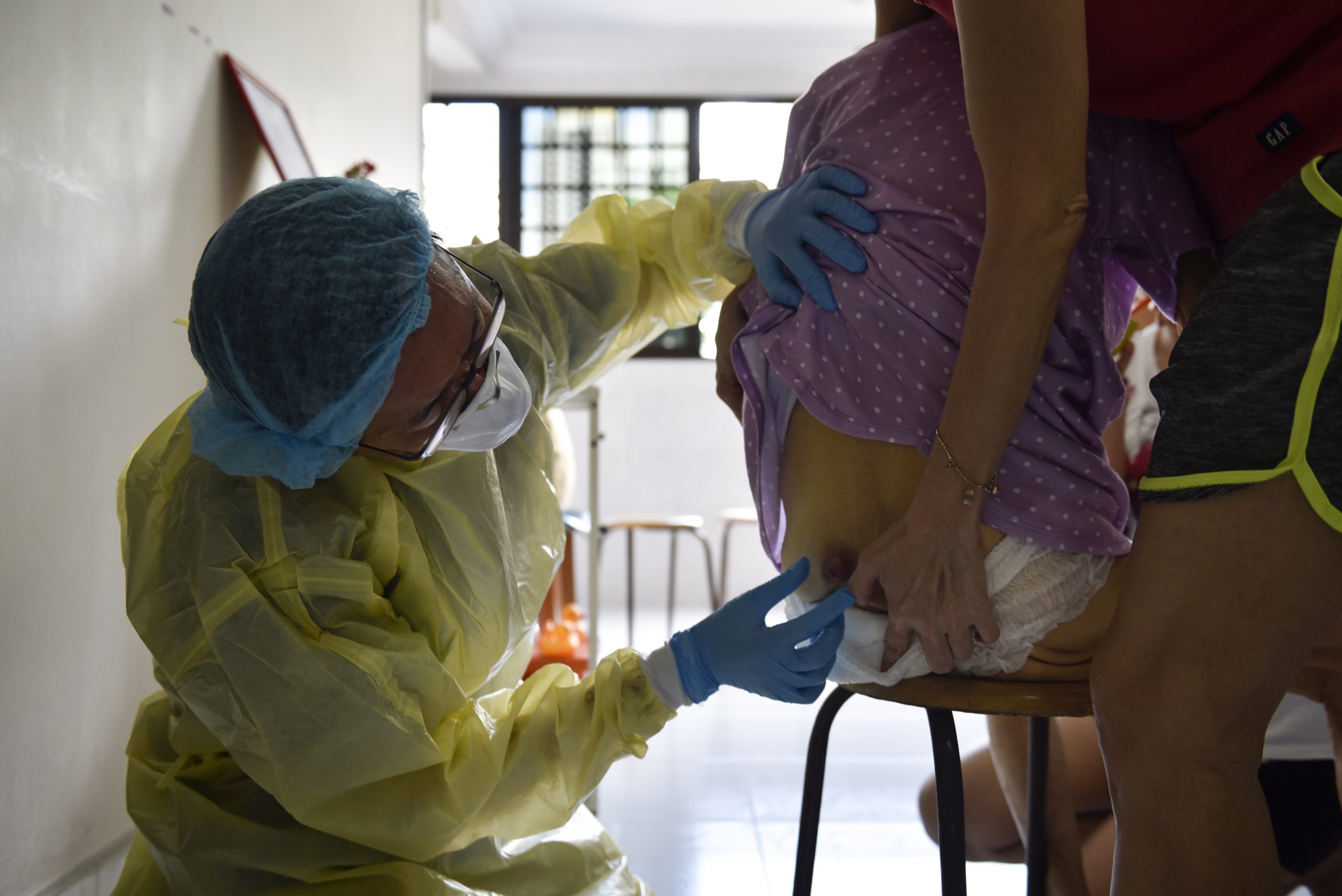 (Above) Dr Tham following up on a patient’s bedsore. To minimise travelling and physical contact during the circuit breaker, Dr. Tham deferred non-critical cases, and tended to those who had acute symptoms like high blood pressure, acute pain or bedsores. 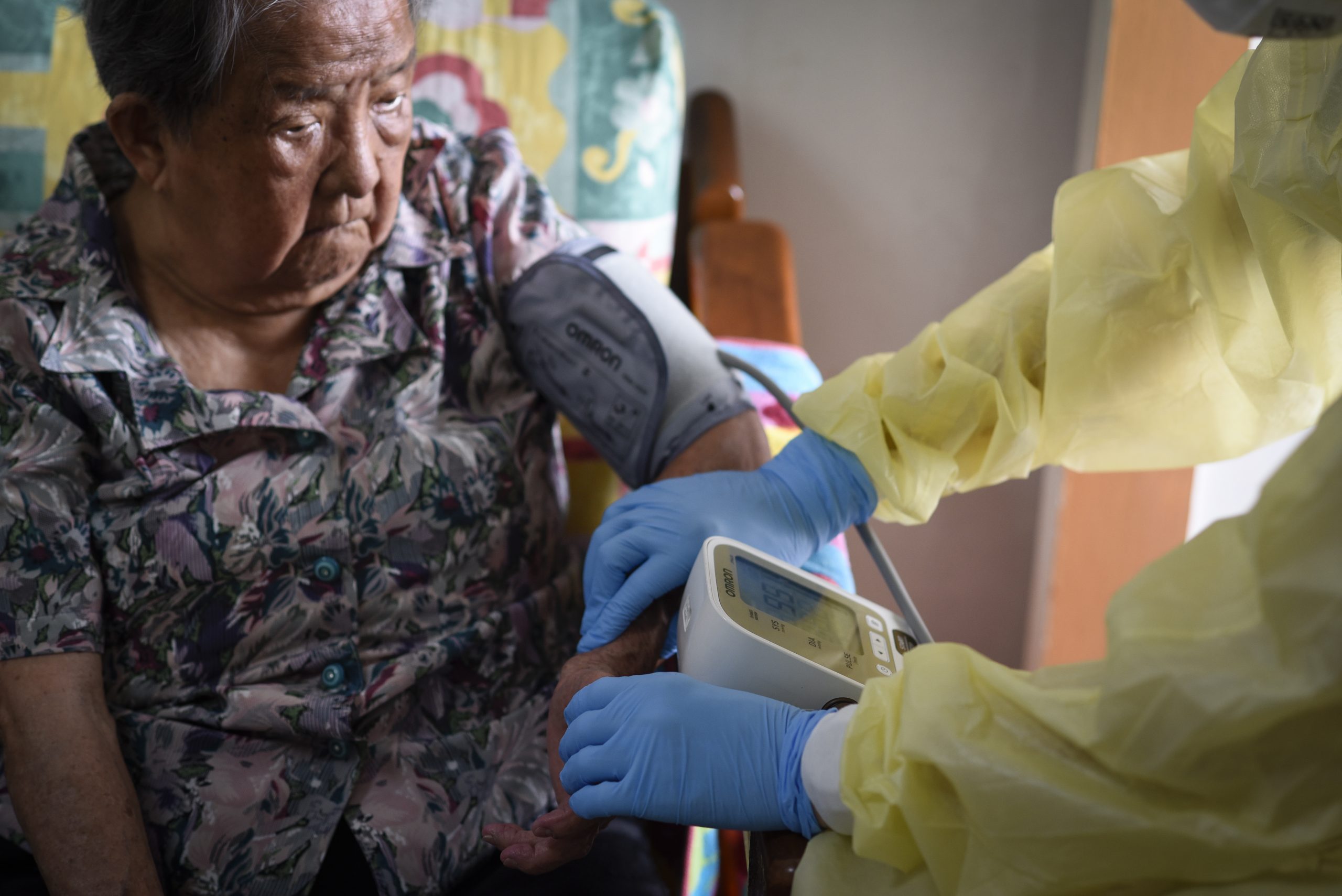 (Above) Dr Tham on a house call to check on Mdm Eng Ng KL, 91, his patient of 4 years. For up to four days a week, Dr Tham makes house visits to patients in Toa Payoh estate after the clinic closes. The patients he visits are bedridden or too weak to head out to seek treatment. 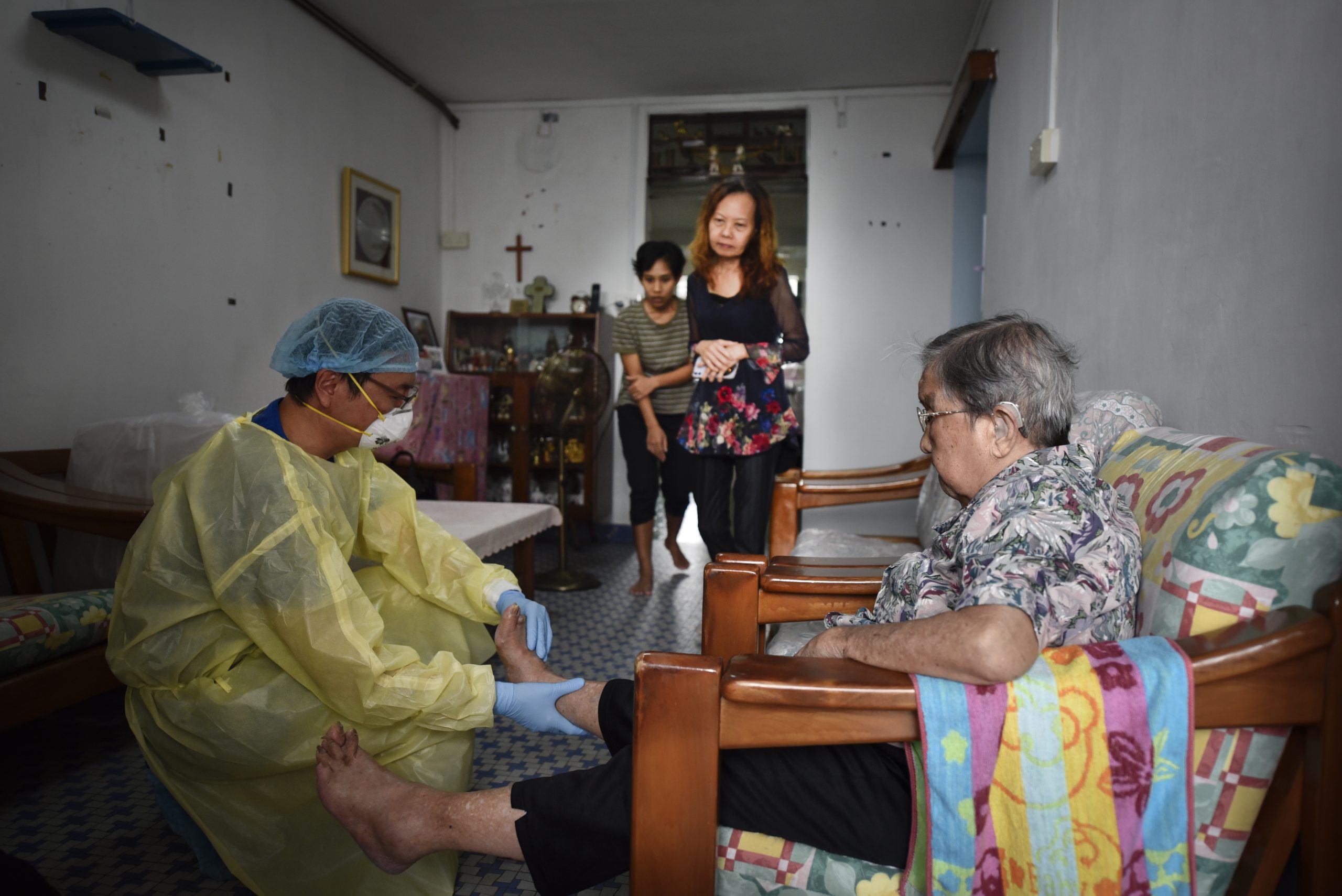 (Above) Dr Tham examines Mdm Eng’s swollen feet. Most of his patients are elderly, who have been seeing him for many years now.

Throughout, bravery, tenacity and innovation underpinned their fight.

As the world’s supply chains broke down and hell broke loose, Dr Teo and Dr Tham remained calm and got creative. Unable to secure medical face shields for themselves and their staff, they purchased those used by welders in the construction sector as a substitute.

They also equipped their Toa Payoh Lorong 4 clinic with ultraviolet-C or UVC germicidal lamps, positioning these opposite the clinic’s air-conditioners to disinfect the air. To decontaminate surfaces, they turned on another set of lamps whenever the place was empty. 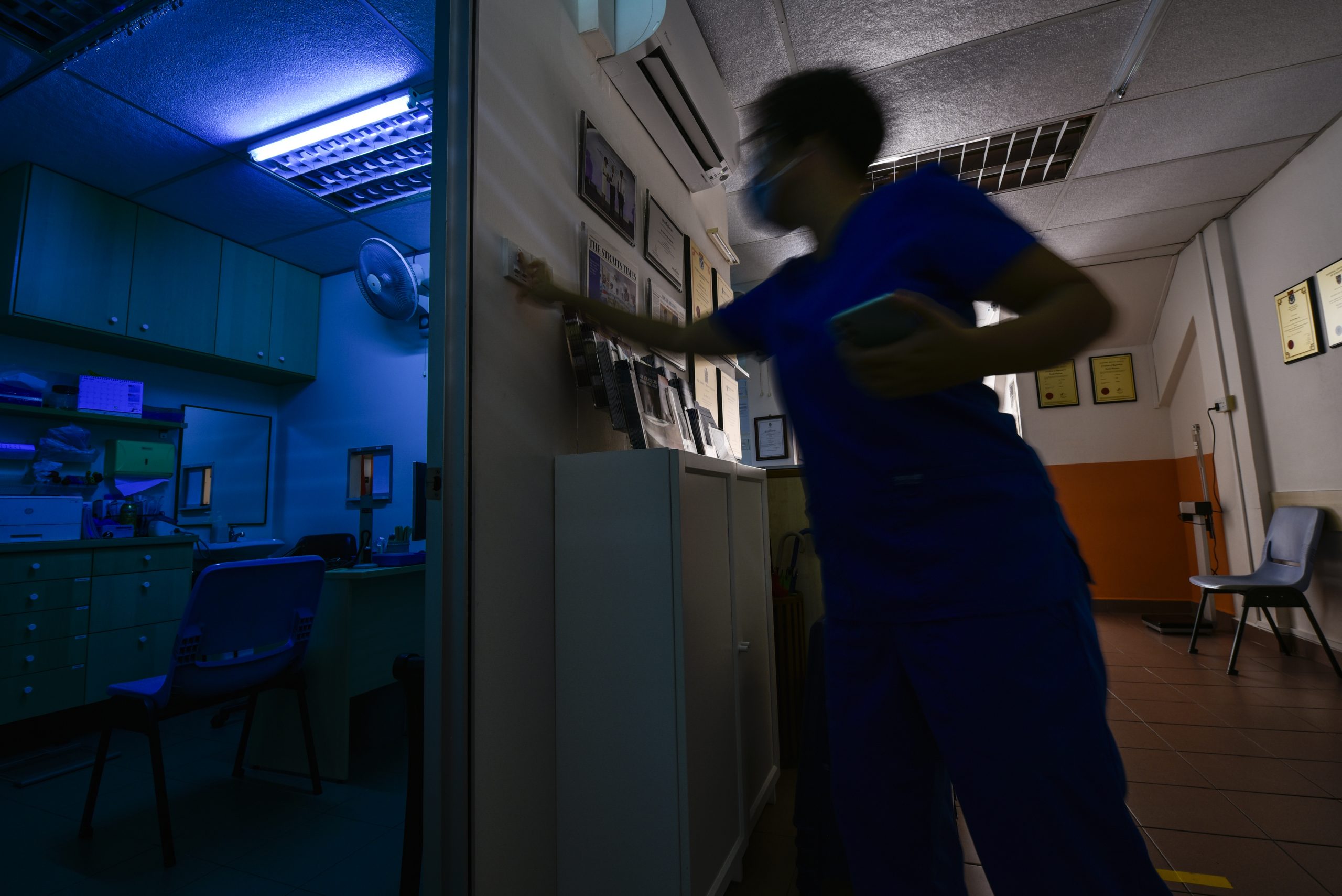 (Above) A clinic assistant switches the UVC germicidal lamps on at the end of the day. When the clinic closes, all clinic surfaces are given a thorough wipe-down before these blue lights are turned on. These lamps were strategically placed opposite air-conditioning units so that the circulated air would pass through the blue light for disinfection.

Dr Teo described the early days of the outbreak as chaotic. “We heard about patients stealing Thermoscans, masks and even toilet paper rolls from clinics.”

Dr Tham added that general practitioners, pummelled by a series of government circulars with varying instructions in response to each new development, had initially felt like they were “swimming with no island in sight”. With no fixed procedures in place at the time, the couple’s WhatsApp group chats with fellow doctors were pinging non-stop, he said.

All the while, at the back of their minds, both Dr Teo and Dr Tham fretted about their son’s well-being. Dr Teo recalled a heart-stopping moment when Kai called her from work to tell her he had a cough and fever. She swiftly sent him for a swab test that thankfully turned out negative.

“You cannot imagine the fear I felt,” she said. “Initially, I was rather worried about his health, so I made it a point to monitor him very closely. I didn’t want him to fall ill and worse still, risk spreading the virus to others.”

“The personal sacrifices of being in healthcare are tremendous. That’s why it’s called a calling. So many are involved in spite of the difficulties and dangers the work poses.”
Sergeant Tham Kai


For his part, Sergeant Kai, an aspiring medical student, who completes his national service stint at the end of February, said his medic work has given him a front row seat to the integral work performed by the nation’s healthcare workers.

“The personal sacrifices of being in healthcare are tremendous. That’s why it’s called a calling. So many are involved in spite of the difficulties and dangers the work poses.”

Outside of work, the family kept to themselves as much as possible. For months, they avoided social routines such as physical church services, as well as meeting their elderly parents and relatives.

With time, as the dust somewhat settled at her clinic, Dr Teo turned her focus to helping Temasek Foundation design a swab booth for general practitioner Public Health Preparedness Clinics (PHPCs) in Singapore. She offered insights that were both pragmatic and kind. As well as the advice to make the booth mobile for the convenience of general practitioners, she suggested replacing black latex gloves with those in a more cheery hue to cater to superstitious users. 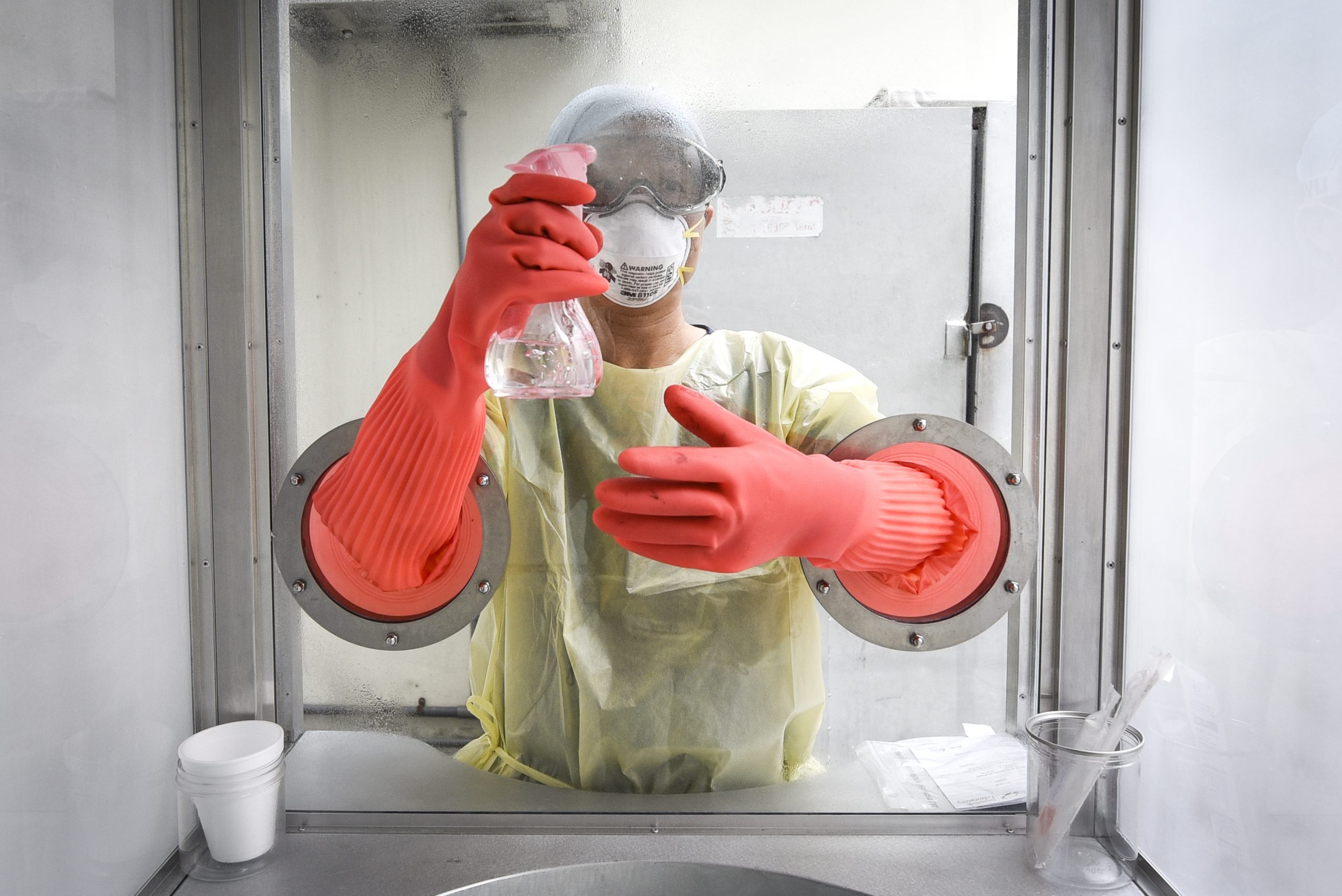 (Above) Dr Teo demonstrates how the booth should be disinfected after each swab. 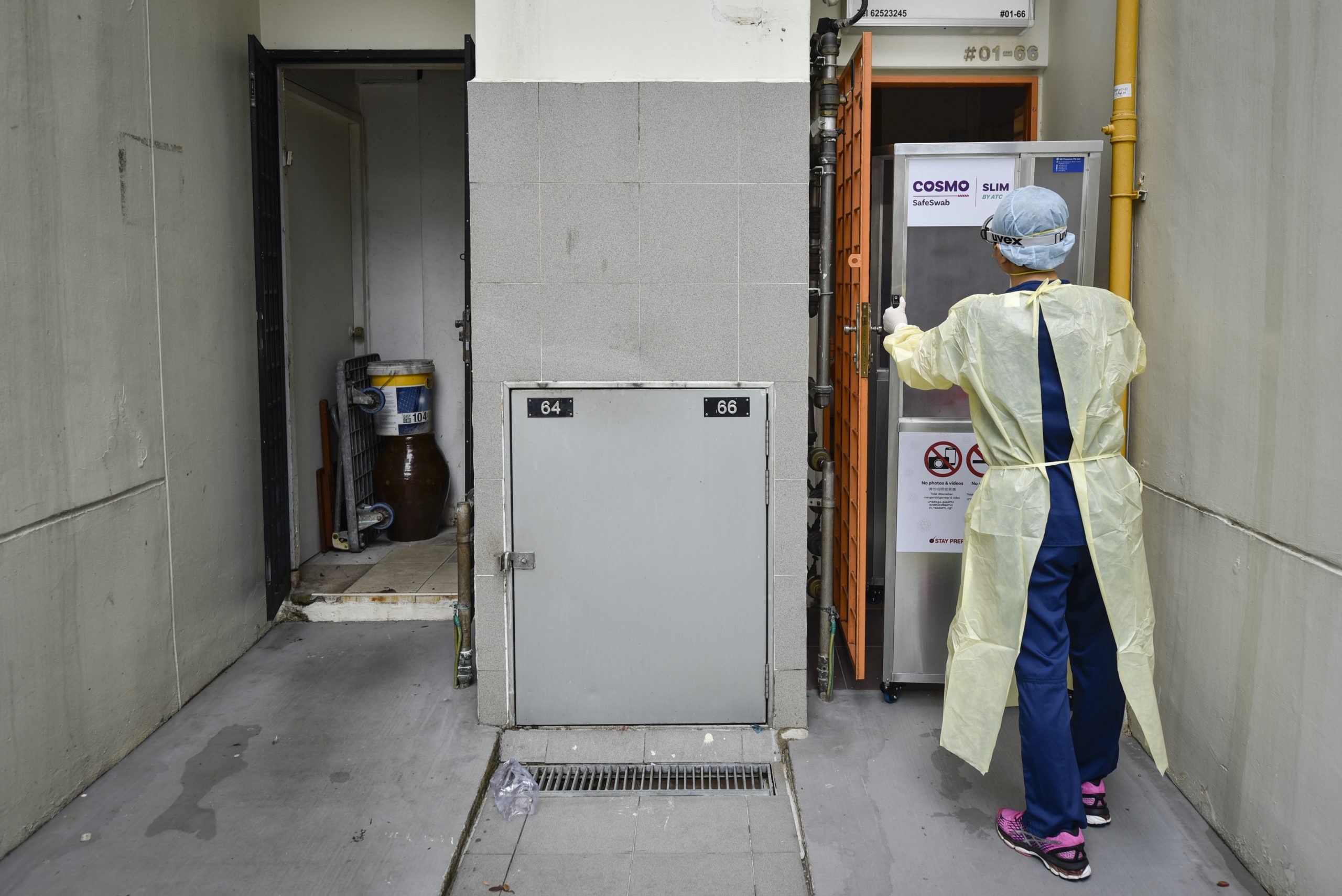 (Above) Dr Teo pushes the COSMO (Covid-19 Swabbing Mobile Booth) SafeSwab Slim back into her clinic. When designing the booth, Dr Teo suggested that the booths be smaller to fit through doors in a clinic, and that they have wheels and be made of a lighter material so that they are mobile.

“It was very fun and meaningful to work on this project. I wanted to do something to help the country and found that I could contribute this way,” she said.

Today, the booth has been rolled out at 170 general practitioner PHPCs. Her team’s report on the booth has also been accepted for review by one of the world’s leading family medicine journals.

Seeing the completed booth for the first time on May 26 last year had thrilled Dr Teo to bits. Likening the experience to receiving a new, bespoke car, she said: “It was the culmination of two weeks of intense work. I could not wait to ‘hop in’ and ‘take it on a drive’.”

The cherry on the cake, she added, was the new “kimchi orange” latex gloves which had replaced the original, dreary black. “It was a far more auspicious shade … We did not want the elderly to be fearful of our booth and the procedure,” she chirped.