What Are You Doing SG?
Home Doers Daniel Tay: Freegan for the People 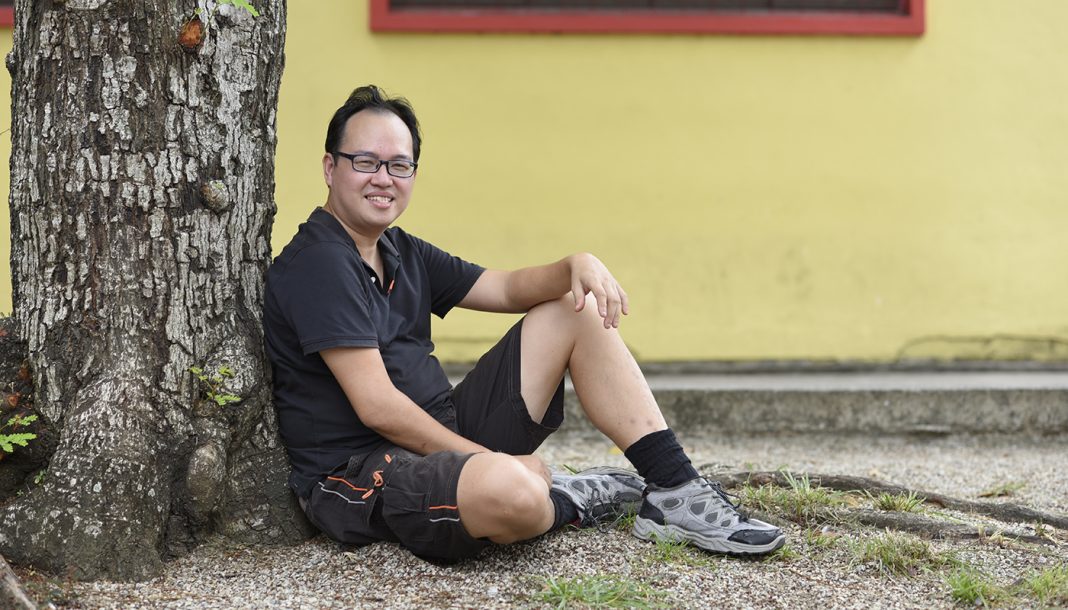 (Photo above) Daniel Tay, 41, a retired financial advisor, works part-time at his friend’s minimart in Little India. He is the go-to person for groups or individuals keen on food rescuing or who would like to start a community fridge here.

t’s ironic. Singapore ranks among the world’s five most expensive cities, but in 2017, Mr Daniel Tay spent only $8 on food.

His regular freegan routine, however, is more mundane, consisting mainly of expeditions to rescue food tossed out because of blemishes or having reached nearly the end of their shelf life.

The freegan movement aims to reduce waste by encouraging people to retrieve and use discarded food and daily necessities.

The inspiration for Mr Tay to adopt freeganism was a former mentor introduced from a work event who urged him to periodically try it.

By January 2017, he was doing it daily and soon, achieved what was seemingly impossible: he reduced his $8 food bill that year to about $5.50 from 2018 onwards.

“In two years, I’ve found that, despite people complaining about the cost of living, it’s possible to live in Singapore without buying much food or other stuff,” he said. “Freeganism is a win-win-win-win situation: you save money, save time, help others and help the Earth.” 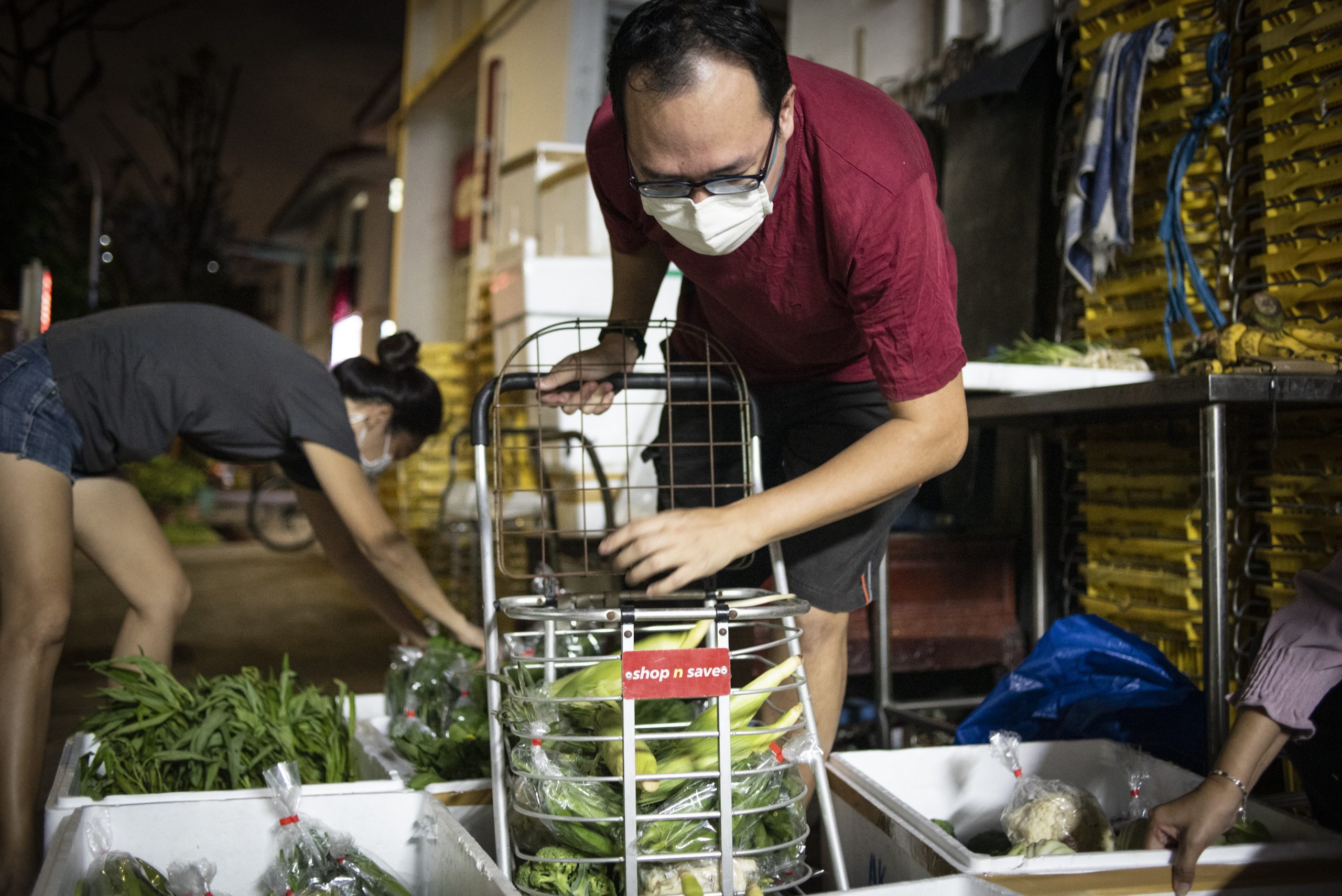 (Above) Daniel Tay, at his weekly food rescue in Aljunied, where he collects a basket full of produce that he shares with friends and neighbours.

More importantly, he insists, he lives a life more fulfilled, freed from the stress and fears of being unable to earn and save enough for retirement.

He quit his job as a financial adviser and now has more time to spend with his elderly parents, travel and write.

“Retiring early doesn’t mean not working. It means not having to work just for money.”

Last May, he worked part-time in a minimart that allowed him to use its lorry to deliver rescued food to freegan groups and community fridges that provide free food for residents.

For just under half of 2020, he also screened temperatures of arriving passengers at Changi Airport for Covid-19 purposes.

His intermittent jobs, coupled with savings, pay for monthly expenses: about $520 for fixed bills such as insurance premiums and mobile subscription, and $500 on such pleasures as watching movies, gifts and downloading e-games. “I can cut such indulgences to zero if I want.”

His most-cherished activity, however, is the round-the-island drives with his parents, with whom he lives. Places they have visited include Changi Village, Jurong Hill and Upper Seletar Reservoir Park.  “It’s important to make memories.” 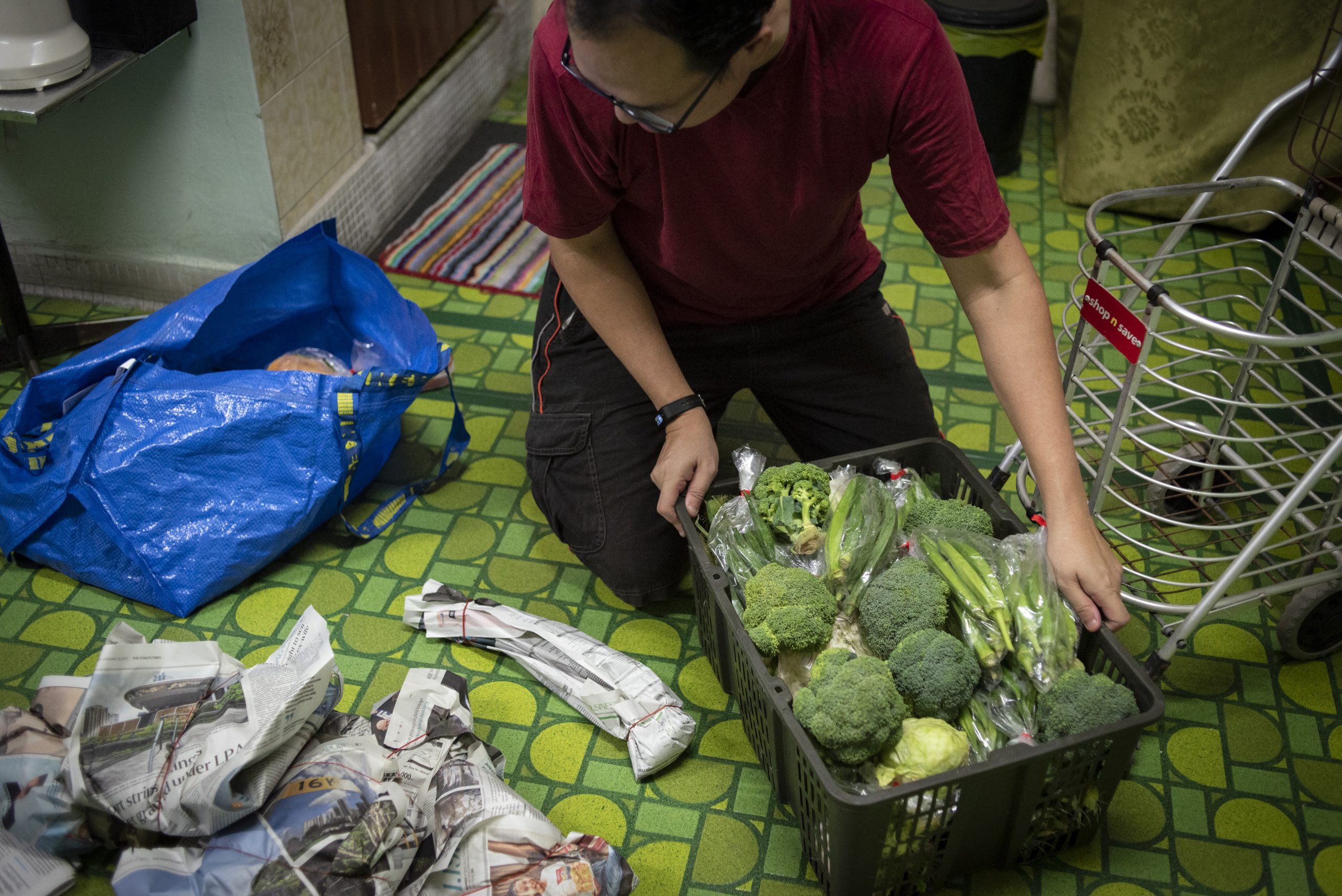 (Above) Daniel Tay, sorts out the rescued produce into smaller portions for distribution to friends and neighbours. His mother, who recently took to consuming rescued food now looks forward to what he brings home.

Just as important in easing the way for him to be a freegan is the “warm, supportive and generous” local freegan community.

He recalls needing crutches and walking boots after spraining his ankle. They arrived shortly after his Facebook post to the community. “Sometimes when you ask for, say, one pair of shoes,  you’d get four and have to figure out what to do with the extras,” Mr Tay said with a chuckle.

Food suppliers, familiar with his mission, are his top donors. As he was recounting tales of the community’s generosity, he received news that 800 cartons of lemons were available, for free.

The 50,000 or so lemons were then given to Food Rescue Sengkang, which distributed them via social media.

“In two years, I’ve found that, despite people complaining about the cost of living, it’s possible to live in Singapore without buying much food or other stuff.”

Each food rescue mission has its surprises too, said Mr Tay. One memorable discovery was “meat dust”.

He and fellow freegans received a box of these frozen dust created from cutting meat. After some research, they fried it but after one bite, agreed it would make better pet food.

It turned out to be nutritious for animals. “My cat’s fur was so smooth after eating it,” said Mr Tay, who used to spend about $28 a month feeding his cat.

The group now receives regular supplies of meat dust, to the delight of pet lovers.

With environmental sustainability gaining traction, the freegan community has swelled to around 9,700 today, from about 3,000 in 2017.

Despite his personal success, Mr Tay advises caution in adopting the lifestyle.

He began by “trying it for two-weeks, then three-months and now, after almost three years, I can say, ‘Yes, I can live like this!’ ”

Other habits he recommends include volunteering with food rescue or freegan groups, or helping friends and families declutter their homes.