(Photo above) Children’s Cancer Foundation beneficiary, Calista Lee (right) with her mother, Eveline Tan. Since the onset of COVID-19, Evelyn had to take extra care of Calista. Worried about her already weakened immune system, they had minimised outdoor activities. Instead, she often teaches Calista how to cook and bake as an alternative way to bond with her.

air for Hope, the annual head-shaving event in aid of children and families affected by cancer, was cut off last year, taking with it the annual average of $3.9 million that it has raised for the past five years.

The fundraiser, whose participants leave a stage with shorn pates, is the flagship fundraiser of the Children’s Cancer Foundation (CCF); its donations go towards supporting free programmes and services, such as psychosocial and financial aid, that help to improve the quality of life of their beneficiaries.

“It is a real pity because a lot of people were looking forward to making a bald statement as well,” said Ms Peng Hai Ying, CEO of the foundation, who took office in 2020.

Like everyone else, the organisation turned to digital outreach. Since the start of the Circuit Breaker, it has run multiple sessions each week, including Zoom classroom activities and therapy sessions. 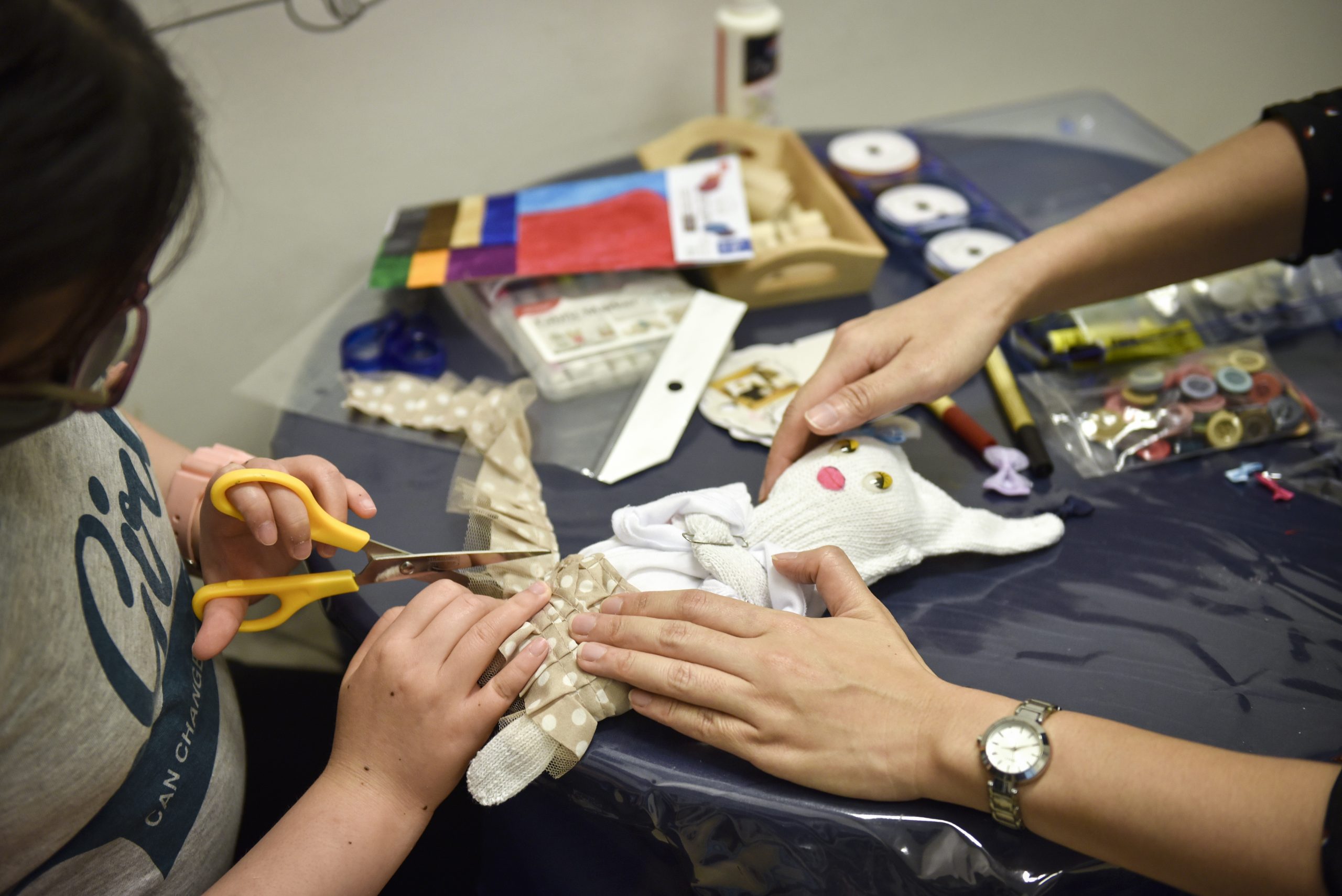 (Above) To get children to express themselves and open up about their feelings, one medium used by Ms Yenn Ang, art therapist at Children’s Cancer Foundation, is art and craft activities. In some cases, explaining a complex situation to children with the use of drawings or toys helps them understand what’s happening around them.

The upside of these virtual engagement sessions is that it enabled more children to receive therapeutic assistance. Children as young as 7 years old, who have social anxiety and are so shy they are hesitant and prefer not to see therapists in person. Virtual engagement, however, opened up new ways for them to express their emotions and creativity.

Online sessions also allowed more children to participate at their convenience, in addition to hospital activities such as bedside play.

Ms Yenn Ang, who has been an art therapist with CCF for more than eight years, pointed out that through CCF’s Zoom art therapy sessions, young clients continue to gain mastery, confidence and control of their artwork and emotional expression through guided online directives.

She has conducted more than 90 virtual therapy sessions since February 2020, which address patients’ emotional well-being. At each session, individuals explore emotions through art, and develop self-awareness and coping resources, building their self-esteem and social skills. 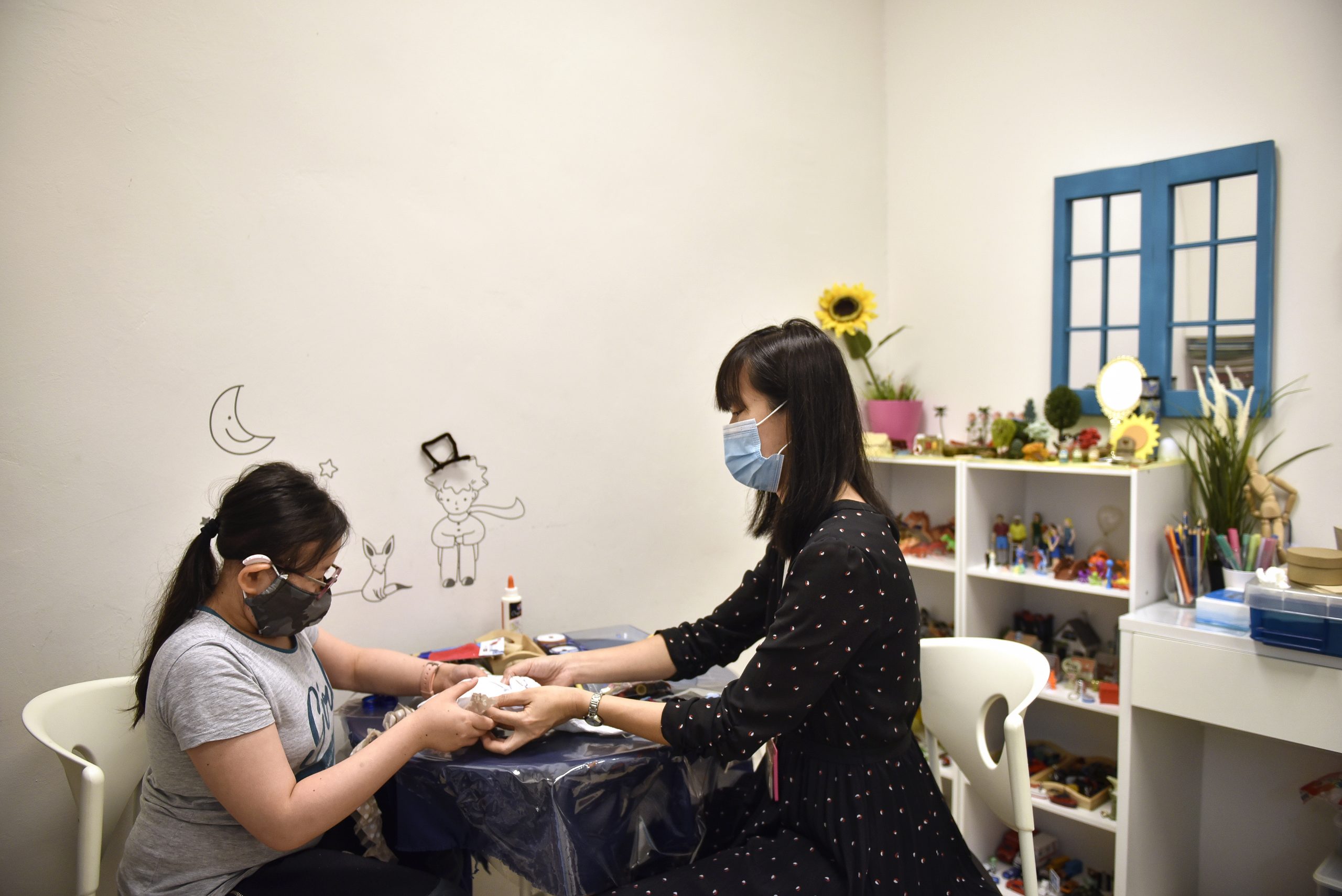 (Above) Ms Yenn Ang (right), an art therapist with CCF, helps foundation beneficiary, Calista Lee, make a glove doll. While they work on the doll together, Ms Ang speaks to Calista about her relationship with her sisters. Beneficiaries sometimes spend months away from their families and school while they seek treatment in hospitals. Part of CCF’s programme includes helping their beneficiaries assimilate back into their lives after treatment.

One eight-year-old who suffered from myelodysplastic syndrome (MDS) was initially shy to turn on the video during her virtual therapy session with Ms Ang, conscious about the weight gain she suffered as a side effect of her treatment.

As the Zoom sessions progressed, she developed familiarity and safety in her art-making process and regained her confidence. Ms Ang said: “After a few sessions, she was comfortable enough to show herself on Zoom.”

By the fourth session, the child even felt safe enough to turn on her video for a casual chat with the therapist. 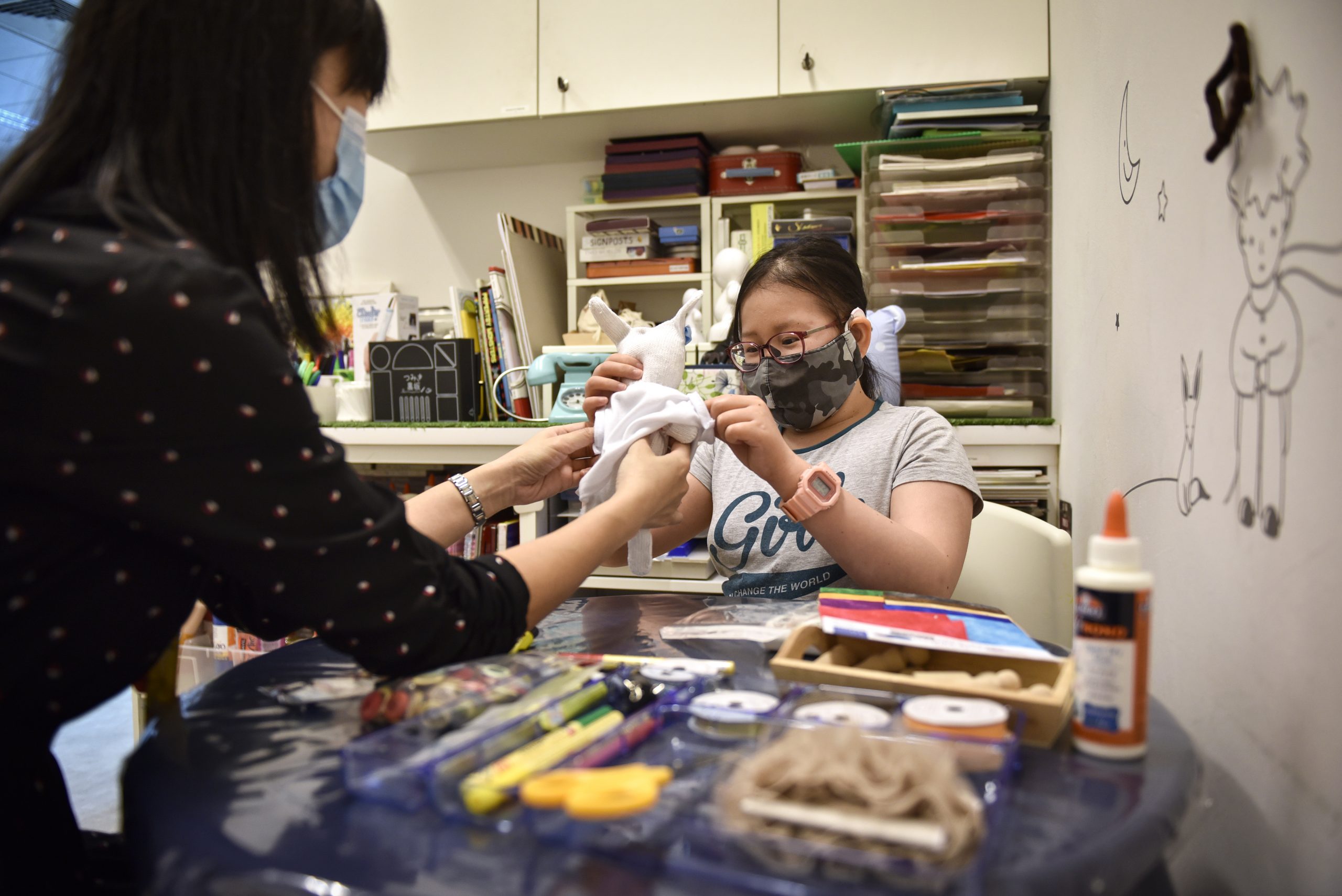 (Above) Children’s Cancer Foundation beneficiary, Calista Lee, makes a glove doll during one of her art therapy sessions. Art therapy has helped her open up and talk about issues that she was previously unable to share with her parents.

Now, Ms Ang grapples with being unable to provide physical comfort for some of her younger clients who take solace in the company of a therapist.

She also misses the camaraderie and emotional support of her colleagues, as well as the ease of discussing cases with them in person. ”We definitely look forward to the day where we can be physically there for each other.”

Though currently CCF’s staff have split-team work arrangements, the foundation’s chief, Ms Peng, is hoping that in 2021, the learning centre, Place for Academic Learning and Support (PALS), will have both on-site and online learning for their children as opposed to being held only on-site in previous years.

Ms Peng noted that there had been abiding support from volunteers who provided academic and social assistance, and helped with the transition to virtual education sessions. She has also seen a rise in the number of people who are keen to contribute their time to support CCF’s work. 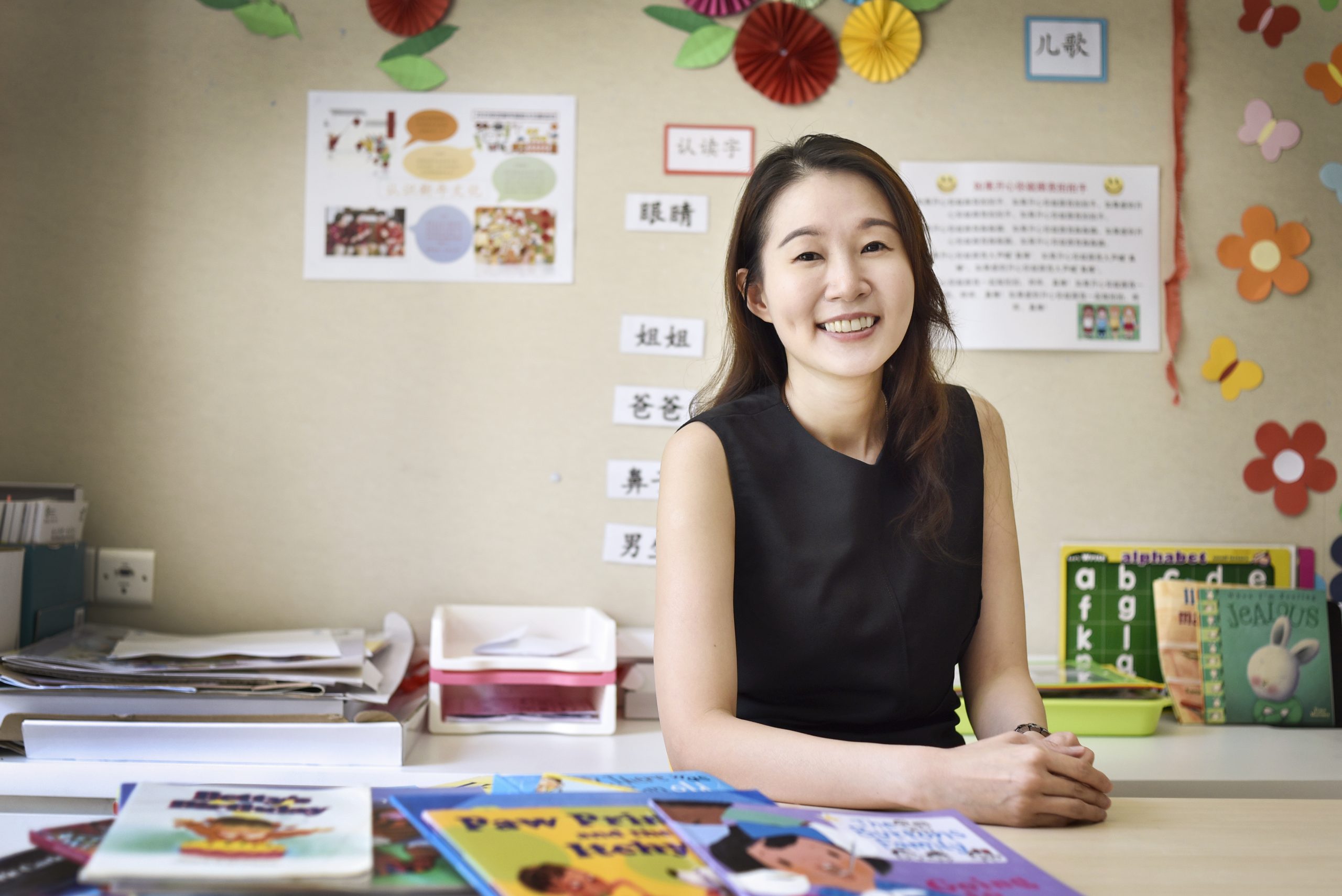 (Above) Ms Peng Hai Ying, appointed the CEO of Children’s Cancer Foundation (CCF) in June last year, has seen a rise in the number of people who are keen to volunteer with CCF.

Nonetheless, there is still worrying news. On top of the reduced funding amount, there are additional expenses arising from COVID-19 which CCF had to cater to. For example, subscriptions for telecommuting platforms like Zoom to facilitate online lessons, courier costs of sending learning materials to the kids for home-based learning and specialist clinic sessions — all of which added a substantial increase to the cost.

This International Childhood Cancer Day 2021, 15 February, show your support by making a pledge at www.ccf.org.sg/support-us/make-a-donation/