What Are You Doing SG?
Home Stories Features Alternative Employment 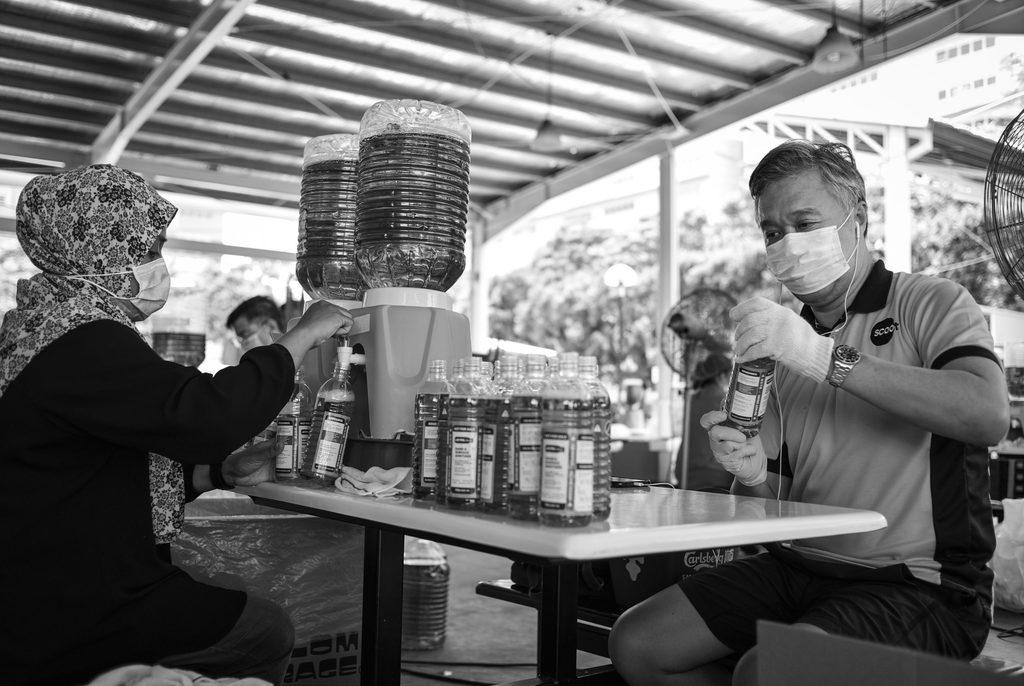 (Photo above) A new ordinary. Employees of Scoot, the low-cost airline subsidiary of Singapore Airlines, bottling sanitisers at MWC. Up to 1,000 of its staff have volunteered to label and fill bottles during the circuit breaker, through the month of May. Since the start of the circuit breaker on April 4, up to 60 employees from pub chain Harry’s Singapore work in teams of 20 every day through April. MWC requested a team of 5 “packers” to stay on and contribute from the beginning of May till the project is concluded, and Harry’s Singapore has duly obliged.

Day jobs aside, volunteers pitch in at the Migrant Workers’ Centre, forming an unlikely crew, for packing and distribution of sanitisers and daily essentials, from Harry’s Singapore, Scoot airlines and NTUC.

Stalls that cater to migrant workers are shuttered, the broad lane between them piled high with detergent bars, snacks and Milo packets.

The shopping belt — 20 spaces with telcos, pawn facilities, remittance services and barbers — usually bustles at the Migrant Workers’ Centre (MWC) Recreation Club at Boon Lay. For now it is temporarily closed, devoted only to man-high stacks of daily essentials bound for workers in dormitories.

Mr Bernard Menon, director of Migrant Workers at National Trades Union Congress (NTUC)  is used to advocating for his NGO’s slogan of “fairness, assistance, integration and representation”. But it’s been a steep learning curve for his staff when it comes to swiftly receiving, arranging and redistributing supplies.

The most urgent item: Sanitisers. 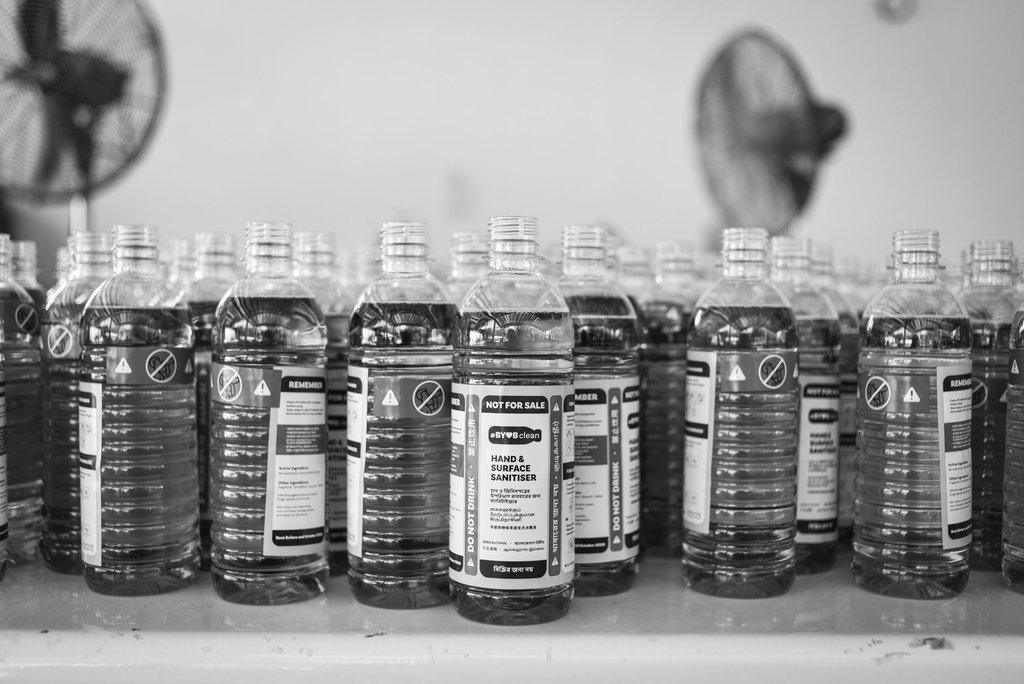 (Above) #BYOB Clean. The sanitiser concentrate was donated by Temasek Foundation, and similar to that distributed to Singaporeans in March. To ensure it’s not mistaken for mineral water, a blue dye has been added to the mix. Bottles are labelled in English, Mandarin, Bengali and Tamil, all the way around, to caution against drinking.

The bulk of labour involves getting these liquids out in plastic bottles used for mineral water. And it has taken a fleet of more than 1,500 volunteers from different organisations working seven days a week, sometimes round the clock, to meet daily targets of 16,000 bottles. The eventual goal is 370,000.

So the crew continuously labels, bottles, caps and packs these sanitisers, seven days a week.

About 40 to 50 volunteers continuously label, bottle, cap and pack the sanitisers, and so far, there have been at least five or six days when they have worked 24 hour stretches, through the night. 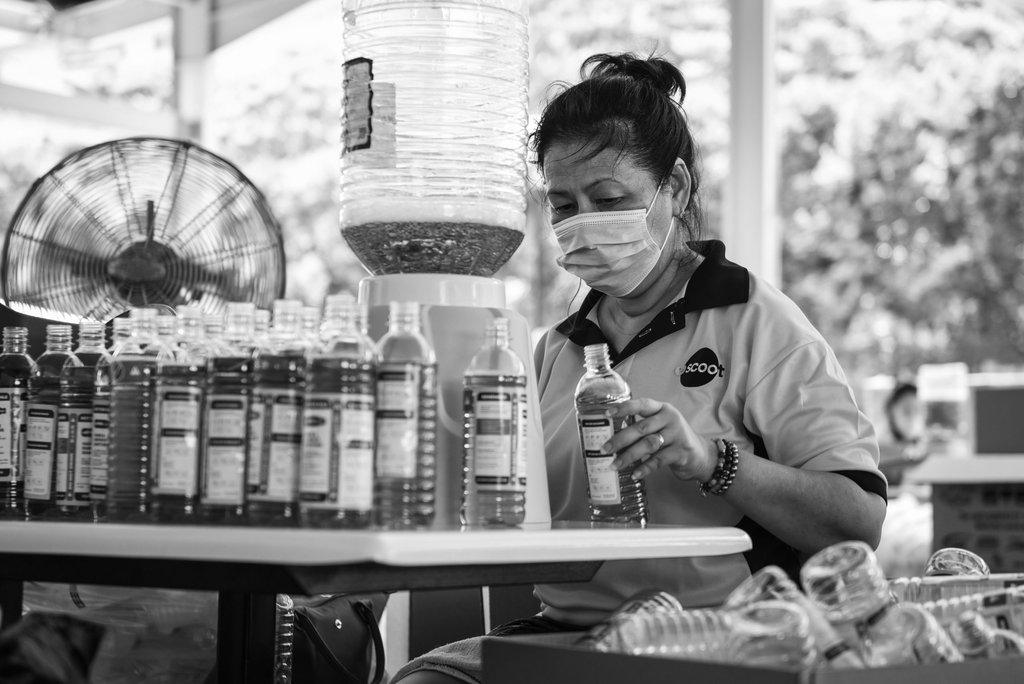 (Above) Fluid motion. A Scoot volunteer fills bottles, which are capped by another volunteer before being placed in a box. Thus far, more than 1,500 volunteers from NTUC (at least 500), Harry’s Singapore (60) and Scoot budget airline (about 1,000) have bottled and packed sanitisers for distribution. They are rostered by their organisations, putting in a day, two days, a few days, or in the case of the pub group, alternating teams of five since the start of the circuit breaker period.

Working the graveyard shift are Young NTUC’s Young Union Leaders, who take on whatever job needs doing, including dispensing and labelling bottles. The sanitisers are dyed a bluish-purple, and fill up pallet tanks of 1,000 litres, which are then decanted into 10-litre water dispensers, and through taps, are filled into smaller bottles of 500ml. 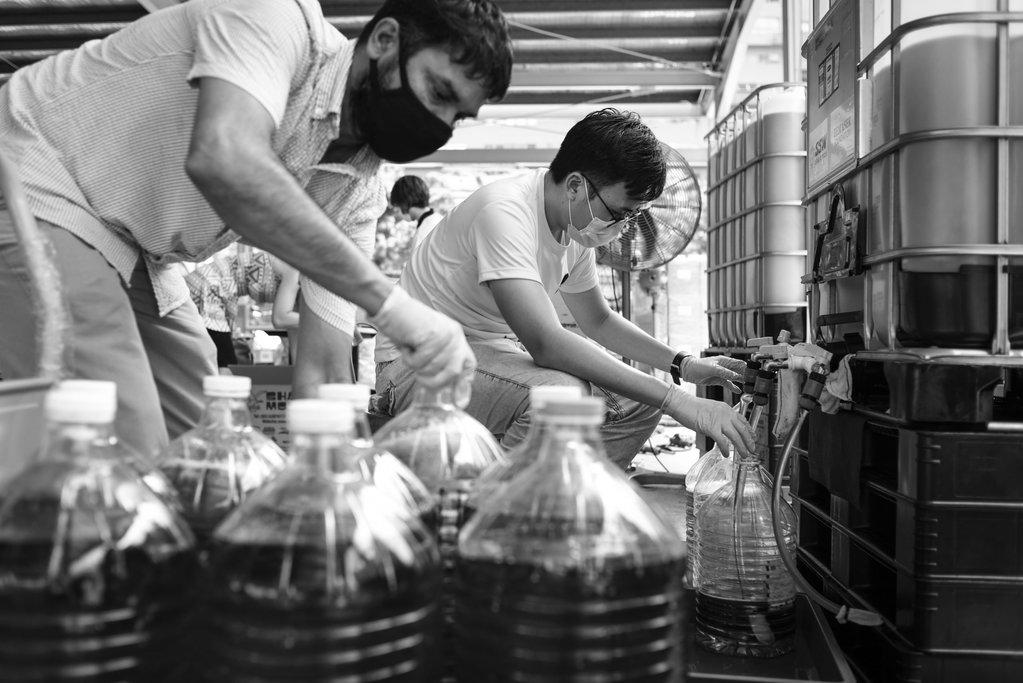 (Above) Not for drinking. Scoot employees fill smaller 10-litre bottles with sanitiser from 1,000 litre IBC tanks. All volunteers undergo temperature checks, and use the SafeEntry digital check-in system, which logs employees’ and visitors’ entry into businesses to facilitate contract tracing. 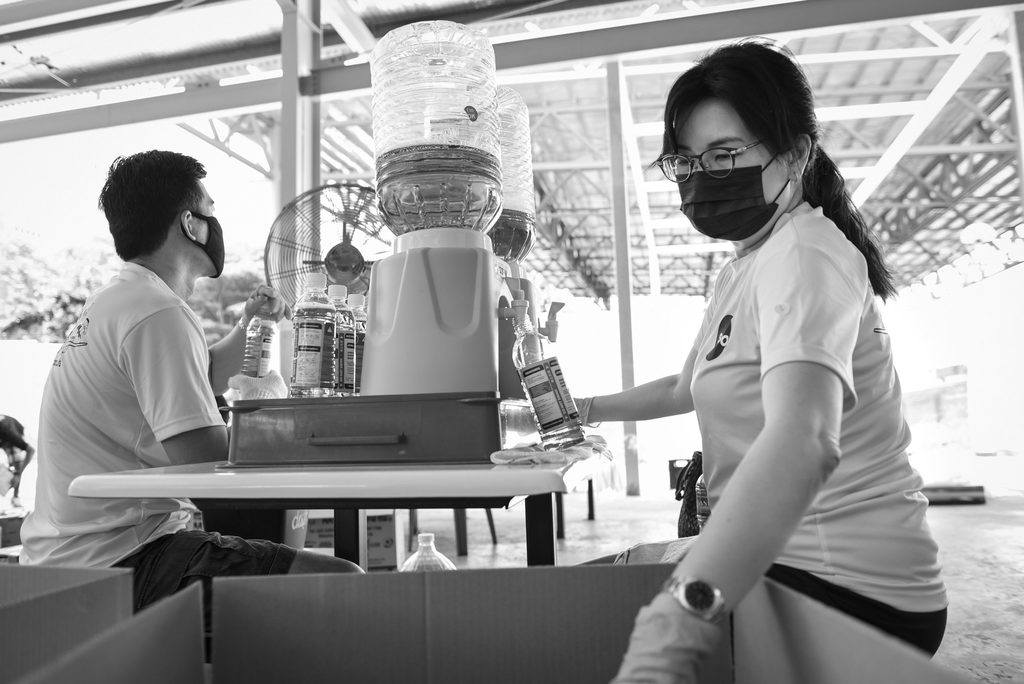 (Above) Scoot over here. Scoot volunteers show up for one-day shifts to help with the bottling of sanitisers. 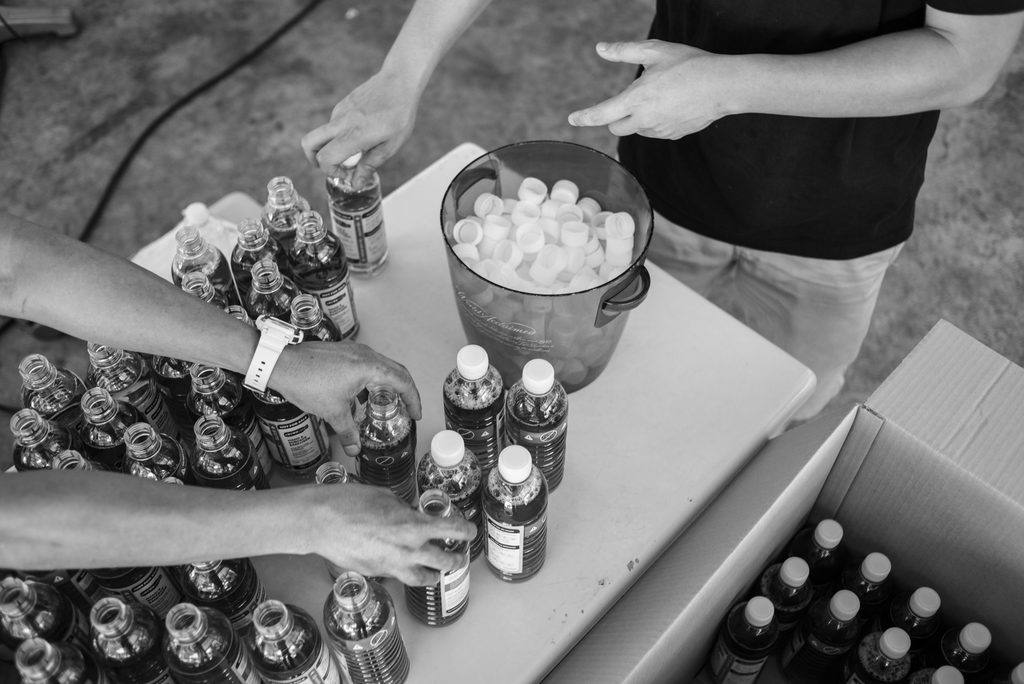 (Above) And that’s a lot. About 40 to 50 volunteers continuously label, bottle, cap and pack the sanitisers seven days a week. So far, there have been at least five or six days when they have worked 24 hour stretches, through the night. Working the graveyard shift are Young NTUC’s Young Union Leaders, who take on whatever job needs doing, including dispensing and labelling bottles. The sanitisers are dyed a bluish-purple, and fill up pallet tanks of 1,000 litres, which are then decanted into 10-litre water dispensers, and through taps, are filled into smaller bottles of 500ml. Filled bottles are then packaged into carton boxes 48 at a time, and each pallet carries 25 of these boxes, holding 1,200 bottles of sanitisers.

Filled bottles are then packaged into carton boxes 48 at a time, and each pallet carries 25 of these boxes, holding 1,200 bottles of sanitisers.

At least five or six days since April 4, volunteers have worked 24 hour stretches, with the graveyard shift often helmed by Young NTUC’s Young Union Leaders, who take on whatever job needs doing.

“We had to dye the hand sanitisers so workers wouldn’t mistake them for water and drink it,” he said. Because the 500ml containers usually hold water, he explained: “We had to label them in the migrant workers’ native vernaculars, Mandarin, Bengali and Tamil. This says, ‘Not for drinking’. And the label goes all round the bottle.”

Up to 48 bottles are then fitted into Shalom Movers’ boxes, with 25 of those boxes loaded onto every pallet.

Last Friday (May 8), 260,000 bottles of sanitisers in boxes carpeted the floor of the centre’s multi-purpose hall, which is about the size of half a football field. The MWC aims to fill and distribute an eventual 370,000 bottles. 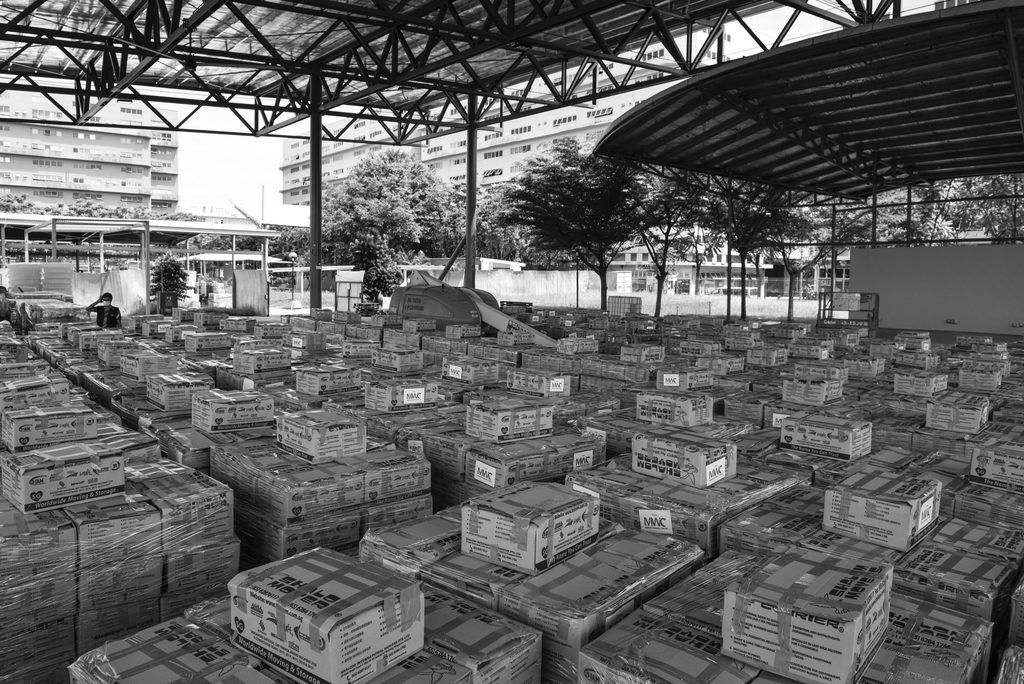 (Above) Leaving in a box. About 260,000 bottles of sanitisers, snugly packed in boxes, sit on the floor of a multi-purpose hall, about the size of half a football field, before being distributed to migrant workers. In all, the Migrant Workers’ Centre aims to fill and distribute 370,000 bottles to all dormitories. About 120,000 of them have already gone out to factory-converted dormitories (about 90,000 workers), as well as temporary quarters and makeshift dorms (about 30,000) in the marine or process sectors, such as shipyards or ocean-going rigs.

About 120,000 bottles have already reached factory-converted dormitories (about 90,000 workers), as well as temporary quarters and makeshift dorms (about 30,000 workers) in the marine or process sectors, such as shipyards or ocean-going rigs.

(Above) The tally. A “scoreboard” sits by the packing area, enabling volunteers to keep track of how well they are doing for the day. The target per day is 16,000, but the record for most bottles filled and packed in a day is 19,200, held by a team from Harry’s Singapore, who started a friendly competition among themselves to top each other’s best.

The centre’s facilities include a warehouse, food court, training centre, cricket field, and administration spaces. But much of the space has been reappropriated during the COVID-19 lockdown for ad hoc storage, including its main administrative office.

Meanwhile, only two stalls at the foodcourt are open to cater to volunteers, who have to sit one diner to a table, because they aren’t allowed to sit across the table from each other without masks on while they eat. 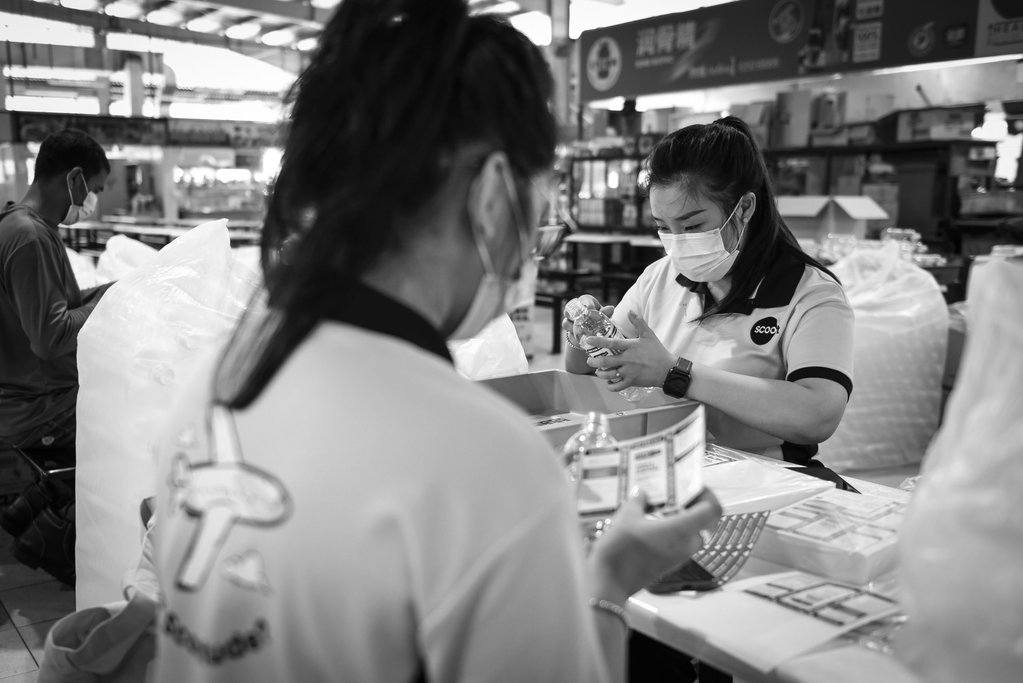 (Above) Getting sticky with it. Volunteers from Scoot and a worker at MWC are seated in an empty canteen, at the MWC, labelling the empty bottles with stickers. Volunteers also include members of the National Transport Workers Union, who are bus and train drivers.

The production line itself is now a well-paced series of tasks.

Staff from budget airline Scoot, in yellow polo T-shirts that read “Escape the ordinary”, are labelling bottles. So are NTUC volunteers. They come for a day or two days, maybe more, and do whatever is needed to keep up the production pace. 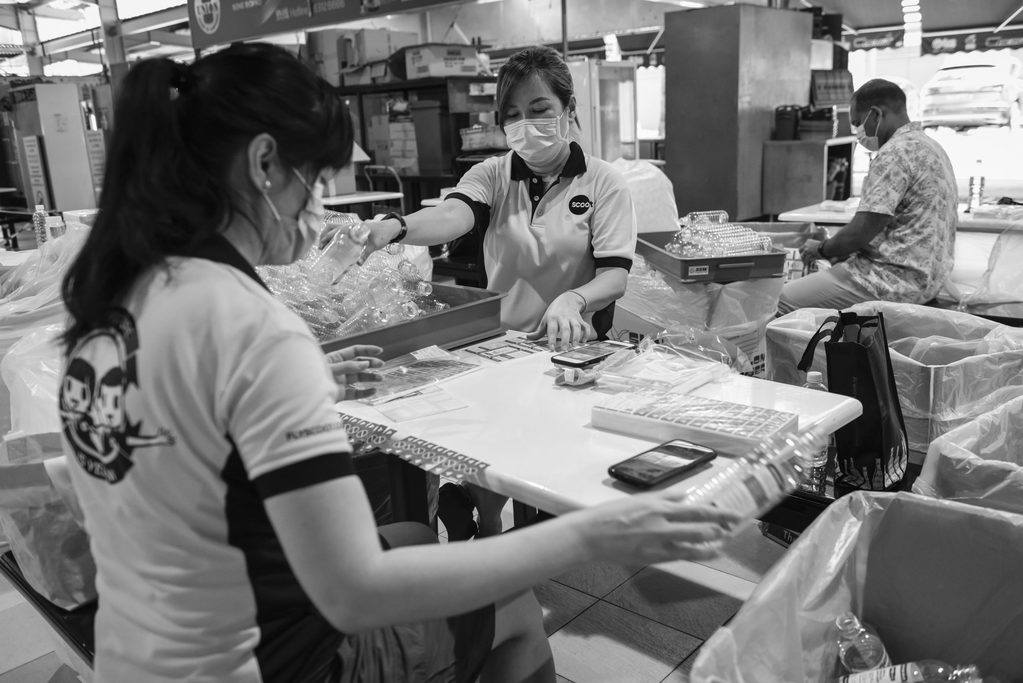 (Above) The bottleneck solution. Scoot volunteers work in pairs to label the 500ml bottles that had been purchased from Malaysia. When Malaysia implemented its Movement Control Order (MCO), the MWC had problems procuring supplies of empty water bottles from across the Causeway. MWC finally secured four shipments of 50,000 from Malaysia — 200,000 units. Ahead of receiving those containers, it resorted to a bulk purchase of unlabelled bottled water, then emptying their contents, and refilling them with sanitisers.

The labelled bottles then go to the next stop: Filling.

Food and beverage staff from pub chain Harry’s Singapore are garbed in their signature black T-shirts that read “Chemically speaking alcohol is a solution”. 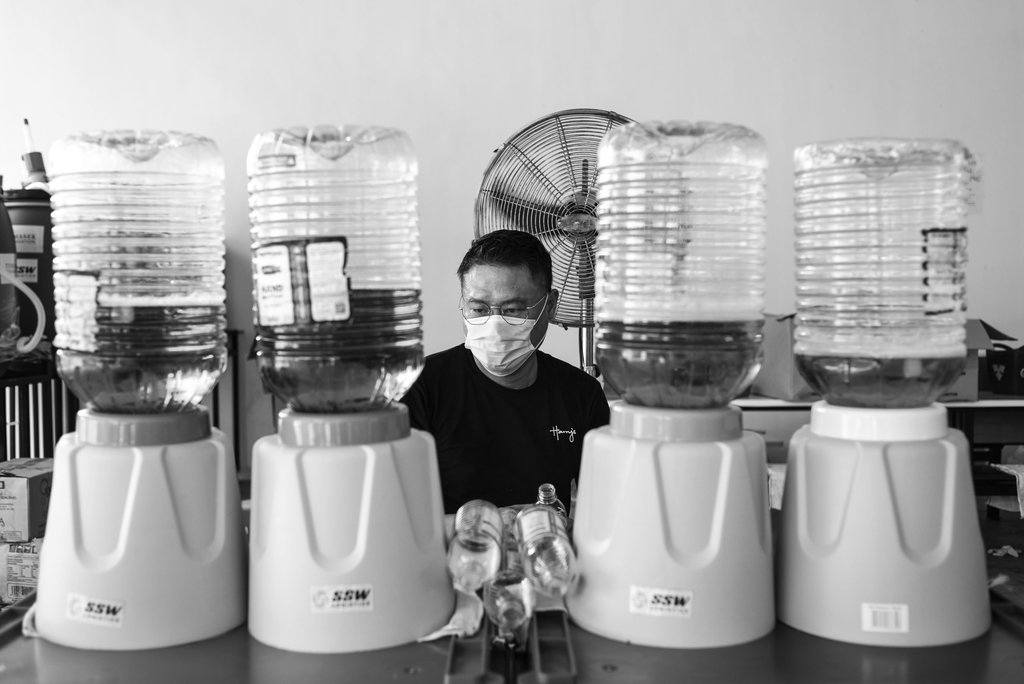 (Above) Don’t try this at home. Harry’s Singapore employee, Elmer Choo, 42, is an operations manager at the pub group. Pitching in at the MWC since April 11, he shows how he can fill up to four bottles at a time.

But instead of pulling beer from the tap into mugs, they’re filling bottles with sanitisers and packing them into boxes to be loaded onto pallets. Teams of five show up on alternate days — they can fill four small bottles at a go.

Because volunteers from Harry’s have become core to the operation, Mr Menon said: “I practically begged them to give us five chaps a day, after they completed their month long obligation up until we complete production because over the one month they’ve been here, they’ve become experts at the most physically demanding of all the production departments — packing.”

Everyone packs boxes with the bottles, cutting them to size to keep contents snug for the commute. 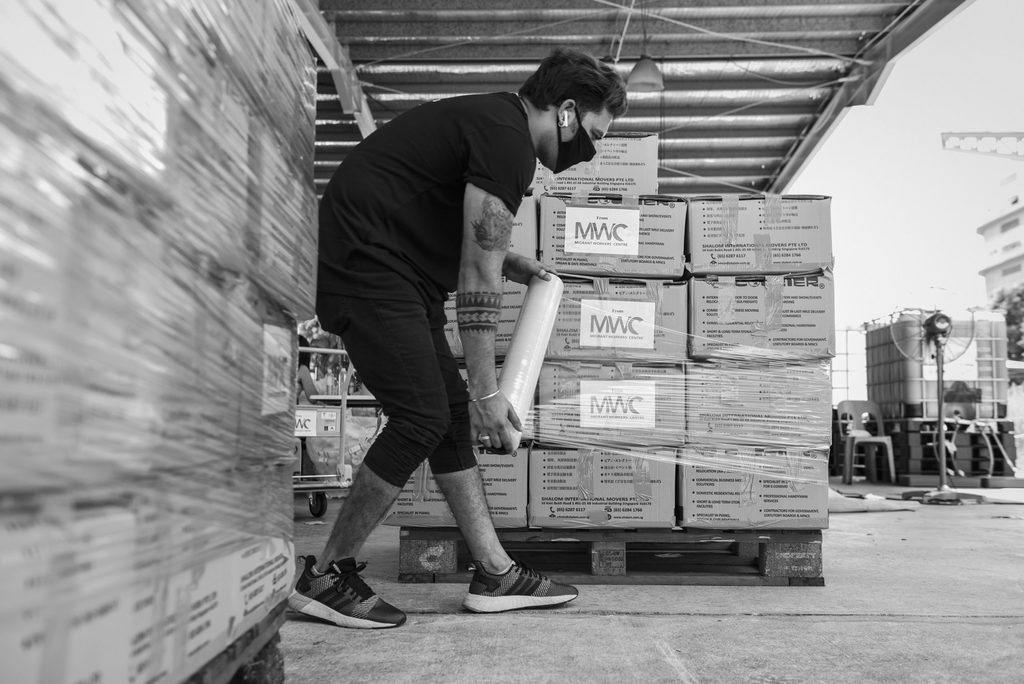 (Above) It’s a wrap. A volunteer from Harry’s wraps a stack of boxes before a forklift carries the pallet to storage. Five employees from Harry’s are into their second month of volunteering at MWC. They gladly stayed on to help beyond their 1-month stint when MWC approached them. 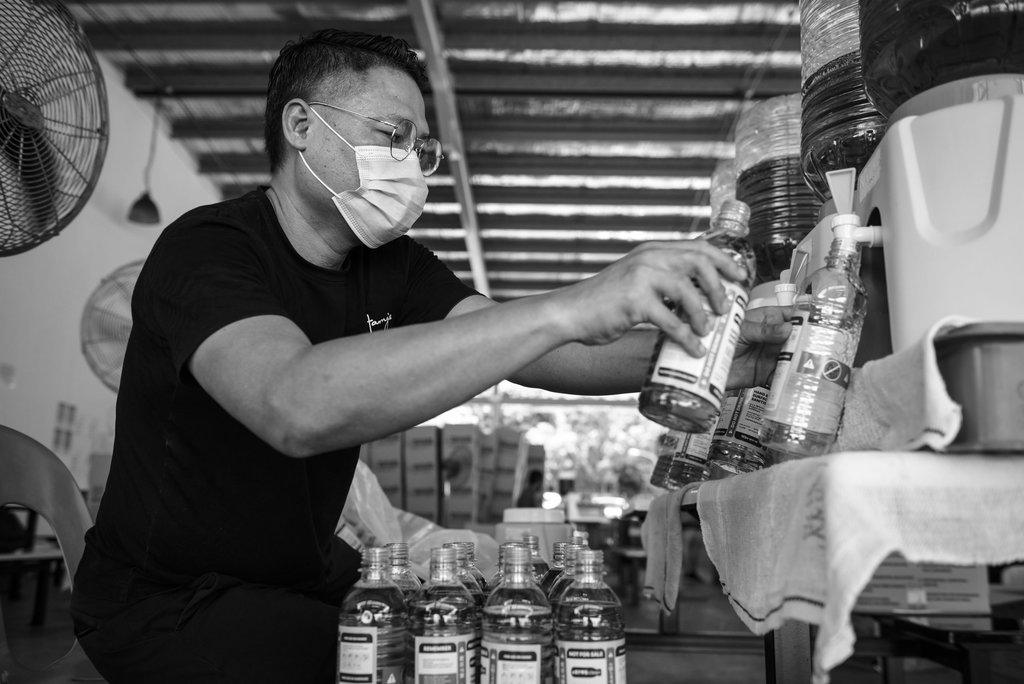 (Above) Now an expert. Elmer Choo, 42, is in-charge of the daily coordination of volunteers. He is often the first volunteer at the site at 8.30am, briefing the rest on what’s needed. Volunteerism is not new to him and he believes in helping others whenever possible. In this case, it was a win-win situation for both Harry’s Singapore and MWC. With the chain’s outlets shut, the gig would help them keep their salary by clocking hours at MWC.

Other than sanitisers, the centre has received an outpouring of gifts and daily necessities from the public. Even so, the most urgent needs still need to be met, because items perceived as necessities by donors are not always top priorities for recipients.

Gesturing to a stack of undistributed surplus of toilet paper, he muses that demand for some items among workers is far less than what well-meaning donors estimate. “It’s a cultural difference that many people don’t yet understand. Our workers just don’t use that much of it.”

Ultimately, cash donations are still preferred, because these can be channelled towards procuring supplies that will most help workers.

Learn more about MWC’s missions, needs and how to contribute. “Migrants We Care” is its banner for Covid-19 fundraising campaign and has so far raised $1.5 million.